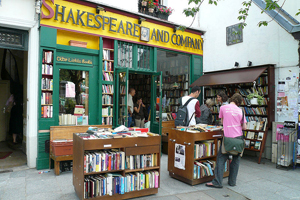 As the spring turned into summer and Paris became increasingly filled with tourists, we had learned to avoid the Left Bank on weekends, so Ben and I elected to hunt down the renowned La Closerie des Lilas on a Wednesday when we wouldn’t have to fight our way through the Latin Quarter and Boulevard Saint-Michel.

While Paris possesses an amazingly convenient metro system, Ben and I were firm believers in walking through the city. The walk from our apartment on Rue Lafayette in the north part of town to the Montparnasse region took less than an hour, and only by wandering the many streets of Paris can you truly get a sense of where everything is.

I didn’t really know Montparnasse as I had spent most of my time in Montmartre, but Ben had a vague understanding of the neighborhood as he had briefly lived there upon his arrival in Paris, before we met and decided to move into the cheap apartment which we shared with a Latvian painter who spent most of his time at Pere Lachaise sketching the graves. 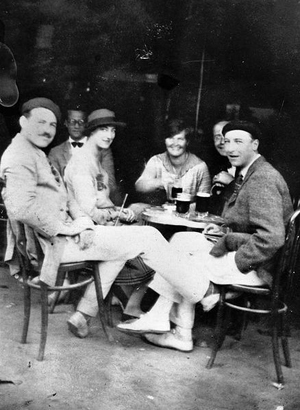 We left our apartment and followed the canal down to the river, where we crossed into the Latin Quarter. There Ben suggested that we stop by the Shakespeare and Company bookstore where he wanted to purchase a copy of Hemingway’s A Moveable Feast. After all, we were going by Hem’s old haunt, Ben reasoned.

In fact, La Closerie des Lilas has been the haunt of many greats, largely due to its location in the bustling art and intellectual district of Montparnasse. In the late part of the 19th century, the famous café was frequented by guests such as Cezanne, Zola, and Charles Baudelaire. Later, the restaurant increased in its renown due to patronage of Hemingway, F. Scott Fitzgerald, James Joyce, and many others. Hemingway wrote that his first encounter with poet Blaise Cendrars occurred at La Closerie des Lilas, and if I remember correctly Henry Miller first met Cendrars roughly twenty years later at the same place.

So for obvious reasons, a couple of bibliophiles such as Ben and I felt that the Closerie was a must-see destination. After purchasing A Moveable Feast (which mentions the café numerous times), we made our way to Boulevard Saint-Michel then headed south to Boulevard du Montparnasse.

After wandering the wrong way for a bit—which, as it is a lovely and thriving street, was not unpleasant—we asked for directions in our broken French and were set straight. 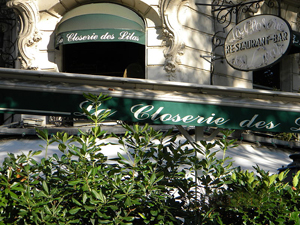 When we came upon the café, which sits at the southern tip of the Montparnasse Cemetery, we were both initially thrilled. Once again, we were about to partake in a bit of history. But when we approached the building and looked at the menu, we were dismayed to find that it was way out of our price range, something like twenty-five Euros for the least expensive plate—far too luxurious for a couple of starving student’s such as ourselves.

As they say in France, C’est la vie.