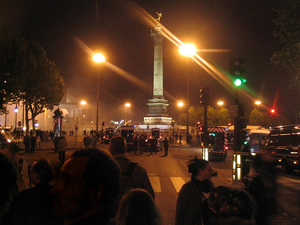 We locked the bar doors and watched as Rue La Fayette became a solid stream of angry protesters. I had seen a good many demonstrations in my time, but this march was unlike any I had known. Usually they involve drumming and chanting and megaphones, but these people were chillingly silent. Many of them brandished clubs and a few carried Molotov cocktails openly. Earlier in the day, shortly after the election results were announced, I’d tried to stop by a market down the street, but the old man who ran it had just finished locking its metal shutters. Everything was closing, he told me, Paris will burn tonight.

France had just elected Nicholas Sarkozy as its new President, but from the look of things outside a good number of people disagreed with the outcome. There were thousands of them, and they were furious.  They poured in from the suburbs and filled every arterial street to capacity as they converged on the center of the city.

“They’ll be going to the Bastille,” the woman working the bar told me. “You be safest to stay in tonight.  They won’t like your being an American.”

I shook my head–this was something that I would have to see. The bartender poured me another drink while I went upstairs to grab my pocket notebook and my guitar, the latter of which I brought without thinking. Downstairs I swallowed back my whiskey then unlocked the door and slipped out into the crowd.

We followed La Fayette until it hit Boulevard de Magenta then turned south. The march was dense with people, but it moved along steadily. It did not take long to reach the Place de la Bastille, the roundabout that had been paved over the site of the infamous prison. 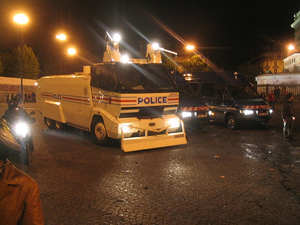 There was already a fortified line of policemen clad in riot gear that cut off access to the July Column, the bronze pillar that stands at the center of the roundabout commemorating the revolution of 1830. At its top stands the golden Spirit of Liberty, a winged nude that holds a torch toward the sky. Usually the street around the column was a mess of traffic and the surrounding sidewalks were filled with markets and tourists, but that night it was an alarming scene of bitter nationals and hyper-tense cops.

The protesters had raise their volume throwing out various chants while a few people shouted through bullhorns. I made my way over to the steps of the Opera Bastille which stands outside the roundabout so that I could look down and survey the goings on. After just a few moments a squad of officers came up the staircase and forced the protesters and I down.

The mob was beginning to move in on the police as I stood off to the side to weigh my options when a hand grabbed my arm. I turned and a man whose head was wrapped in bandages addressed me questioningly in French. I shook my head and said, “Ne parle.”

“English?” He asked, and I nodded. He smiled. “It is good that you brought the guitar. The people will need protest music! I am a player myself. We shall sing for them! And for France!”

I took an immediate liking to this enthusiastic fellow, and asked if the police had injured his head.

“No, nothing like that. I…how you say…jumped out of my window the other day and fell a very long way.

It is my sister. She ran away with a man and disgraced our whole family and, well, sometimes people become upset. You know?” 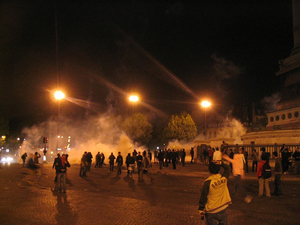 Just then the chants ceased and the crowd let out a roar. I turned and saw that they had begun pelting the cops with rocks and bottles. The police held their line and ducked behind the protection of their shields and began to inch slowly forward. Suddenly on the other end of the square a police car leapt into flames. Someone must have made use of a gasoline bomb. For a moment the shouting and throwing stopped as everyone, rioter and police officer alike, turned to watch the flames rise. Then there was a great explosion that sent out a tremendous concussion, and the police and protesters turned back to matters at hand as the real fight began. In that moment there was no time, there was only the Bastille and all that its history stood for. It could have been 1798 or 1830 or 2078–it didn’t matter. Frenchman had fought Frenchman there before and they were doing it in 2007 and they would do it again someday, brick by brick.

The man with the bandaged head grabbed my shoulder and said, “Maybe we play protest songs for them later. This is no place for a guitar. I have a recording studio not far from here. We will go to it! We will drink whiskey and write protest music!”

I looked at the square which was now complete chaos and nodded. We turned and made our way through the crowd and cut off through a relatively deserted side street. I later found out that they burned thirteen cars that night.