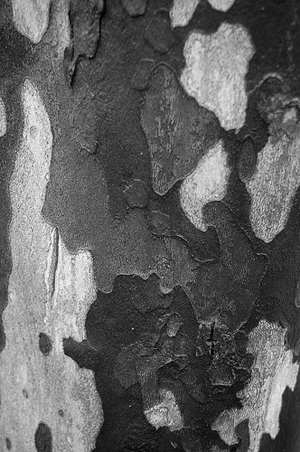 The name translates more or less as “potluck” though there is a two-sided menu that barely ever changes and never more than two or three daily specials. The terrace of another bistrot no more than twenty metres down the block is just as large and always more crowded, which may tell me the people eating there know something I don’t know about my place, but I don’t like crowds. And anyway, it’s not the advertised cuisine marocaine—which means that even the chicken salad has some couscous buried in it—that brings me here. I come to Potluck for the sycamores.

There were sycamores on the street where I grew up, and their fruits, which we called itchy-balls, were wonderful for little-boy warfare, but I don’t pelt the other clients when itchy-balls are in season, and I’m not sure it’s nostalgia in any event that draws me to these big trees. I like the urban camouflage pattern the peeling bark creates the length of a sycamore’s trunk. And they can live, or so I hear, for six hundred years, and maybe this lumbering giant overhead was alive when François Villon was writing poems and robbing churches: the biggest fly on the wall I ever hope to see (and too bad it can’t me its tales) is sheltering me, an ordinary petite souris, without disdaining my lack of years. And so, equally immobile, we sit and look.

The tree is better at this than I am. He’s had more practice at patience and he’s used to being rooted to the spot. I am at my best, which merely means I feel better, when I’m wandering the streets of Paris or, if I have to sit, I am close enough to eavesdrop or to talk to other people. My sycamore is companionable, but mute. Perhaps sitting in silence next to and under him is like fishing: you wait, or at least I do, until something bites, then everything is good, if only for a few minutes. But I’m less angler and more fish right now, waiting for something passing along the sidewalk to hook me. No, that doesn’t make any sense either. Fish don’t wait around for the spoon or the spinner, eager to take the bait and get reeled in, even if it’s only catch-and-release. Nope, not working. I get up and leave…

…and head west, with my back to the final bunk of Arman and Victor Noir, hoping for something that will tempt my imagination or at least my eyes. But the duffers playing pétanque in front of the pretty park are still just cradling their hollow balls (skip the joke, Joe) and not pulling out dueling pistols and the nounous on the benches inside aren’t pretty or flirting with the passersby and the old guys sitting around aren’t selling dope or dirty pictures—pity all around: a guy can hope, and you never know. So I trudge, still west, past the smoker’s museum, always closed, where I try to bum a cigarette from everyone who passes me without any luck at all but dubious glances aplenty, past the butcher shop that makes most of its money, as far as I can tell, selling the French equivalent of home fries, past the wine bar where, when luck is good and selon arrivage, I can get a glass of Fiefs Vendéens, a salty white from the mouth of the Loire, past the ATM where a couple of years ago two punks, one of whom discovered suddenly he had a broken wrist, were trying to rip off a girl who had just taken her cash, past God-knows-how-many places that had once been interesting and today have nothing to say to me, not a word. And I turn to the south-west.

A dull street, wide and leafy, a handsome street, but nothing interesting to see and nothing interesting has ever happened here, but it does lead to the market, part open, part famously covered. At this time in the afternoon both may be empty, but, again, you never know. Never. Nor do you—or I, more to the point—know where we’ll wind up. So I turn to the left, the best way to go where I think I want to go if not the most obvious. 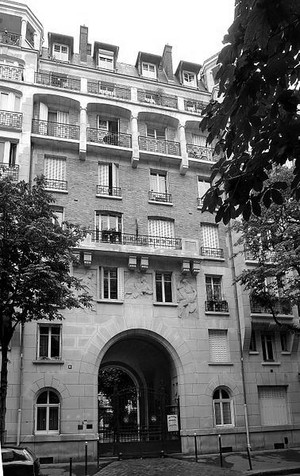 And it stops me in my tracks. An apartment house I’ve passed hundreds of times, or at least twenty-five, taps me on the shoulder and says, Take a look at me, pal, for chrissake, and I do. It’s a beaux-arts beauty, a post-Haussmann dowager from the late 1890s or not much later, but the tan stone only rises two stories and surrounds the arch leading into the court, and the rest is yellowish brick up to the eighth floor where the mansart is, according to law, capped in gray. Proust would have put his tongue to it, to taste it like a cookie, to understand it. Too proustien for me, but I want to know if this old building is really what she claims to be: is she the same fore and aft? Sandwiched between two others, I can’t see the sides, but maybe I can see the back, see if the builder spent the extra money to make the back as lovely as the façade.

The gates in the archway are swung back. On my left and right in the courtyard there are tall glass and iron  doors leading to the little elevator lobbies. Straight ahead and slightly to the left there is another door, smaller, less elegant. That’s the one that should lead to the staircase up to the servants’ quarters at the top of the house—rooms maybe ten m2 which, these days, are rented out at €800 a month, toilet down the hall, shower on the landing—and usually a back door. The spiral stairs, with a rope hanging down the axis for hauling up the groceries, and the door are both where they should be. I open the door and go out. In the alley, past the shed with the green and yellow poubelles, I start to turn around, going to my right… and it catches my eye, it won’t let go and I don’t want it to.

It may have been the last gasp of Art Deco. But when I look to my right in this little alley behind a building where I have no business being, there it is alive and well and breathing with ease and elegance. During the great rise of motor scooters everywhere on earth, from the end of the 1950s until around 1970, Piaggio’s Vespa and the Lambretta bestrode the world—or at least were bestridden anywhere you looked in Paris. The scooters are still around, and the Vespa hasn’t really changed all that much in half a century. A little dumpy, but in my book more alluring than the up-to-date models, mainly Japanese, that look like baby motorcycles in drag. 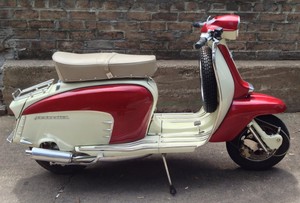 But the Lambretta was (and, like the one that has caught me, still is) a work of art, a masterpiece, if admittedly in the last stage of the genre. The distinctive curve of its engine housing was the final attempt at, or maybe the dime-store version of, the curves and swoops that defined Art Deco, like the fender of the Cord, the most beautiful car ever made, or the slouch at the top of the Chrysler building. The Lambretta was Fred Astaire; the new ones you see on the streets of Paris, Gérard Depardieu—one beauty, many beasts.

Finding this one is a treat, a genuine keeper, because it is immaculate, elegant and above all rare (Lambretta went out of business in 1972). And the colors… the colors, straight out of the era of the René Bonnet, the Panhard, the original Corvette. The fumes from its two-stroke engine can make you want to throw up, and its pathetically inadequate muffler lets out a shrill screech that will make your ears ring for a day. No matter. Sitting still in the dirty alley, with no company but cigarette butts and the residue of dogs, it is as pretty as a jar full of jelly beans, as magnificent in its little way as the Palais de Tokyo and as eternally stylish as the great Astaire himself.

And my good luck today.

photo 1 by Holly Kuchera [CC BY 2.0], via Flickr
Photo of the 1966 Lambretta by Joseph Lestrange