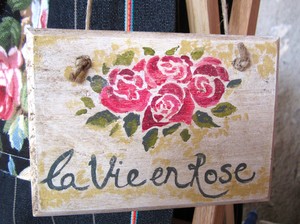 One spring morning, Carol and Martin Scott said to each other, “Let’s move to France before it’s too late.” And, so their French story began.  They bought their farm, Pedeloup, in 2003 after vacationing in the Gers, (department 32) for over 10 years, quite by accident.  The farm had been for sale for three years when they first stepped foot on its fertile soil.  Originally, Pedeloup had been a working farm, as most in the Gers were and still are, raising ducks for fois gras, cattle for milk, and growing vines for armagnac.  They wanted flat land where they could grow flowers and vegetables. When the opportunity arose they seized it, knowing they had to in order to make their dream come true.  Pedeloup had everything they were looking for. The farm is on the outskirts of the village of Monguihelm.  It has a secondary school for their two sons, Olivier and Oscar, a post office, a restaurant and is within an hour and a half drive to the Atlantic coast and the Pyrénées mountains. 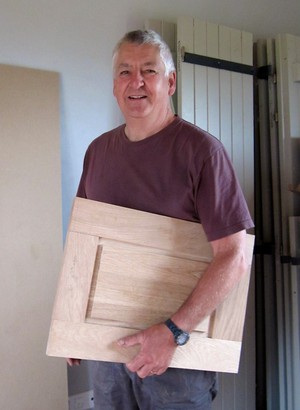 Carol and Martin both lived in the Lake District in England where they met while working for the same company. They married, had two sons and lived in a beautiful Victorian house in a lovely neighborhood.  In 2001, after world events changed the retail market in England, they decided to utilize the downturn in the economy as a catalyst for change.  They chose to immerse themselves in another culture completely.  Once moved, they joined a group of local artisans and took classes to learn how to do business the French way.  Carol & Martin went back to their roots, their passions and have been making a living, a real living, in the the sense elf sharing a good life together with their family, ever since. 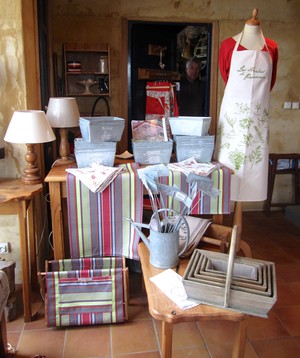 Carol was a fashion designer In England.  Inspired by the Catalan fabrics while visiting Collioure, on the northern tip of the Costa Brava, Carol discovered the unique fabrics of Toiles du Soleil. She decided to create her own line of linens called La Maison de Pedeloup.  It’s a little bit Basque and a little bit Provencal, but solely Carol Scott.  She sells her goods at the Wednesday market in Barbotan les Thermes and Marciac and the Thursday market in Eauze.  After 5 years she has customers world wide.  And Martin, who was originally trained as a fine carpenter in England, now fabricates bespoke kitchens and bathrooms.  He also designs lamps and outdoor furniture, taking a nod from American Shaker and Adirondack styles.  After 5 years of word of mouth, their quality products have sell themselves. 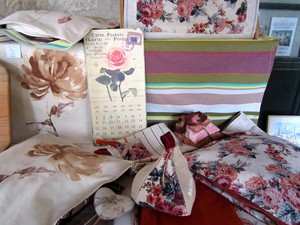 When asked if they have any regrets, they both replied simultaneously, “Only that we didn’t do it sooner!”  They love living in the Gers and wouldn’t leave even for first class tickets, all expenses paid, back to England.  Carol says before I close my book of notes, “Nightingales sing day and night.  What more could you ask for?”  What more could you ask for, indeed.