Irish Arts in Paris at the Centre Culturel Irlandais (CCI) 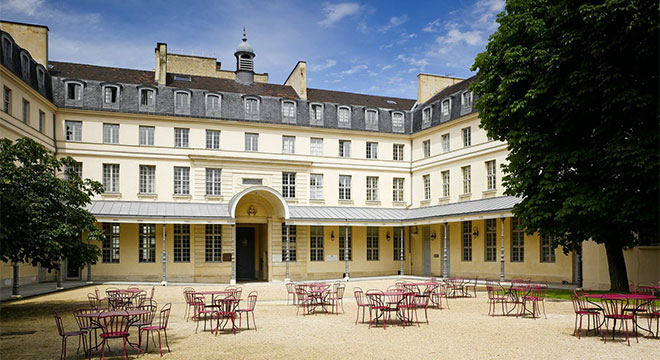 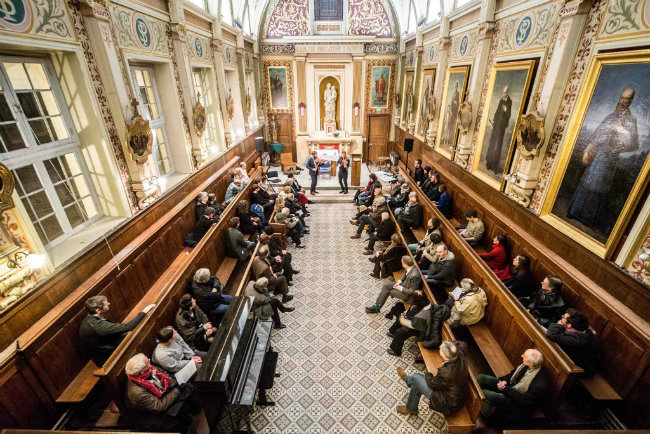 The chapel at the Irish Cultural Centre, courtesy of CCI/Facebook

In the heart of the Latin Quarter, behind the gates of number 5 rue des Irlandais, a hub of Irish arts can be found in Paris. Since its inauguration in the winter of 2002, the Centre Culturel Irlandais (CCI) has been dedicated to the promotion of Irish artistic creation in France. Last summer, I ventured beyond the gates to explore what the Centre has to offer visitors. I chatted with some of the resident artists and soaked up the creative atmosphere.

The CCI courtyard is a sun trap ideal for picnics on a good day. During the summer, the Centre uses this magical space to hold outdoor concerts and exhibitions. In June of last year, the Centre celebrated Fête de la Musique with a festival-style event featuring plenty of food, drink and great music, which I was lucky enough to attend. The event was headlined by the magnificent and friendly Lisa Hannigan. Here’s hoping they throw a similar party this year!

The courtyard at the Irish Cultural Centre, courtesy of CCI

Oozing with historical character, the Centre’s highly decorative chapel offers those in need of some quiet contemplation a little oasis away from the city’s hustle and bustle. Throughout the year, the Centre holds cultural events from poetry readings to plays and concerts. The chapel’s acoustics lend themselves particularly well to music and the spoken word, making it a wonderful venue for a soulful evening. I will long remember a moving performance by the Irish singer-songwriter Mick Flannery.

Alternatively, with a collection of about 10,000 books, the CCI’s small library is perfect for a cosy reading session with an Irish classic from the likes of Yeats, Joyce or Beckett.

If you fancy a stay in the Cultural Centre, a limited number of quaint rooms of varying sizes and cost are made available to people with a cultural connection to Ireland and can be applied for online. The accommodation is very reasonably priced, especially considering the historical surroundings and the Centre’s central location in the 5th arrondissement. 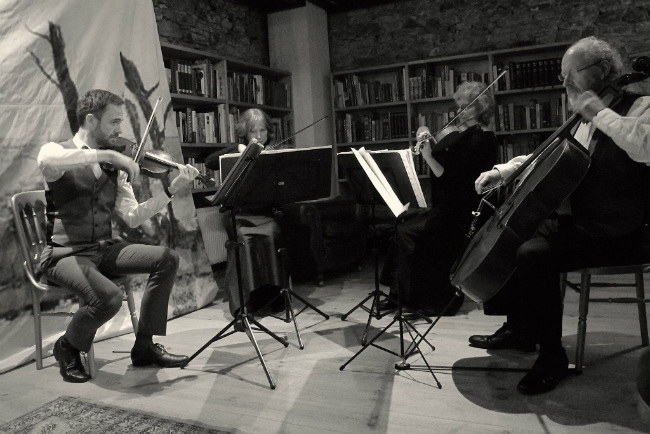 “Love and War – Words and Music from the Western Front”, an event at the CCI, photo courtesy of CCI/Facebook

Each year the Centre’s cloistered courtyard plays host to an eclectic community of visual artists, designers, writers, musicians, filmmakers and performers– offering the felicitous residents a sojourn in the capital to pursue their artistic practice.

Andrew Kearney, a Limerick-born mixed-media artist-in-residence, invited me into his Parisian studio to discuss his three-month-long residency at CCI. His work focuses on installations utilizing sculpture, light, sound and photography to create a dialogue with specific sites, spaces or events.

Andrew explained how the combination of living and working in the atmospheric and cultural surroundings of Paris has influenced his work: “Paris is so richly laden with art centres and public spaces, the parks here are so well managed and well used because the people live so tightly in the community.” It is the collective aspect of French culture coupled with the reconceptualization of public space as an extension of one’s individual living quarters, where public parks become the people’s garden, which are the primary aspects of French culture that were an impetus for Andrew’s work practice: “It’s this experience of a different sense of space that I’ll be featuring and reinventing in the next projects, wherever they are”. 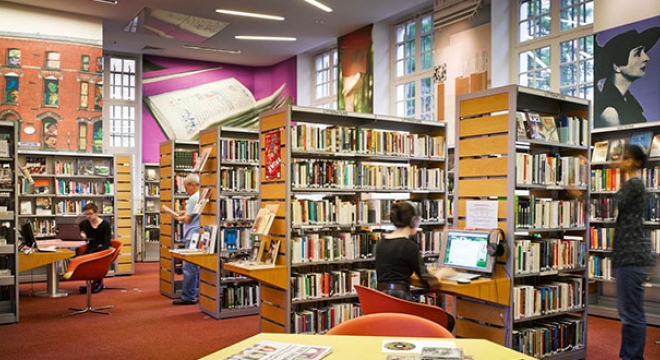 The library at the Irish Cultural Centre courtesy of the CCI

Although the studio spaces within the CCI are relatively small, Andrew explained how this characteristic of the Centre became central to his work. “I’m interested in scale; I quite like the way I had to adapt to that scale challenge. What’s nice about the CCI is that it is relatively unrestricted, beyond the studio, there is the courtyard to hang work, which I made use of. Here, you are in a nurturing space so you can do things that you can’t beyond the gates.”

Andrew also emphasized the collaborative aspect of the residency: “In the evenings we would have gigs in the Centre; local musicians come and play alongside the resident musicians. It’s a collective process and the same happens with the visual artists.” Andrew worked with a cartoonist and writer who was also resident at the Centre. She found that his work fed into her process in many ways. “A sort of cross-fertilization happens in these kinds of collective spaces which is important to get involved in.” 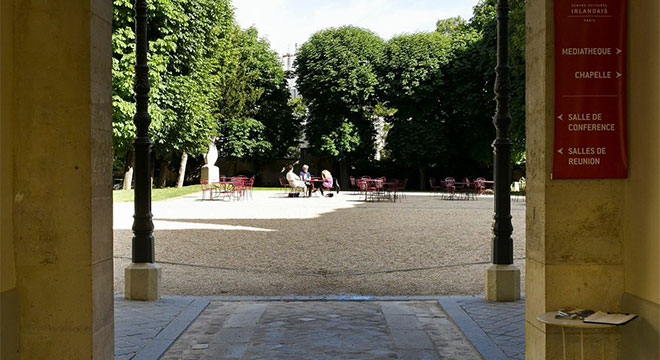 courtesy of the Irish Cultural Centre in Paris

Artistic institutions often offer residency programs as a means of developing relationships between artists and venues, with the actual stay onsite marking only the beginning of the affiliation. For Andrew, his experience at the CCI in Paris marks the beginning of an important French connection. “I’d suggest that all artists do a residency at some stage in their career; it steps you out of your own context and relates you to a new one which is always positive within your own work practice.”

Irish artists of all disciplines are invited to apply for The CCI residency program in Paris. Applications can be made on-line through the CCI website. 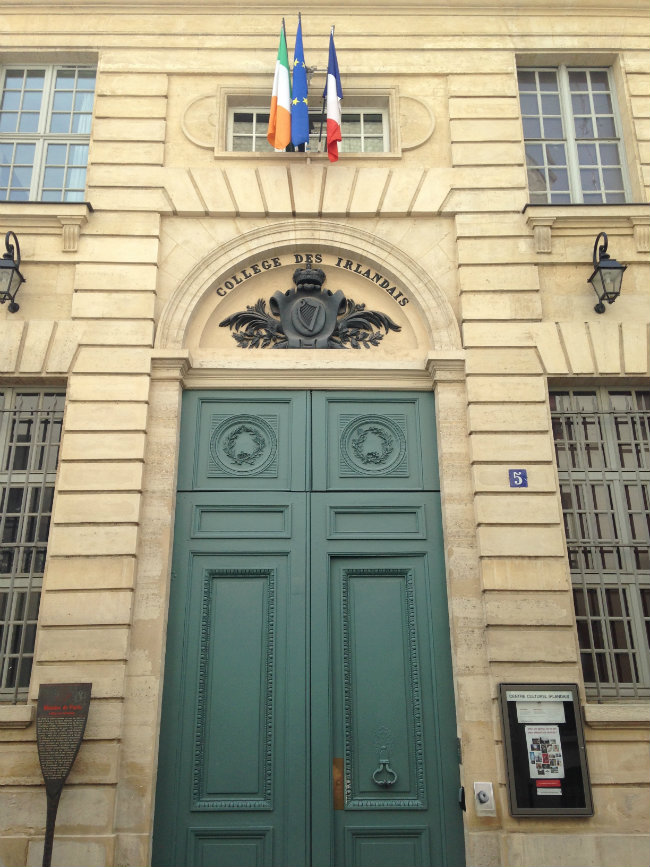 Lead photo credit : The courtyard at the Irish Cultural Centre, courtesy of CCI