Touring Paris with a Teen or a Tween 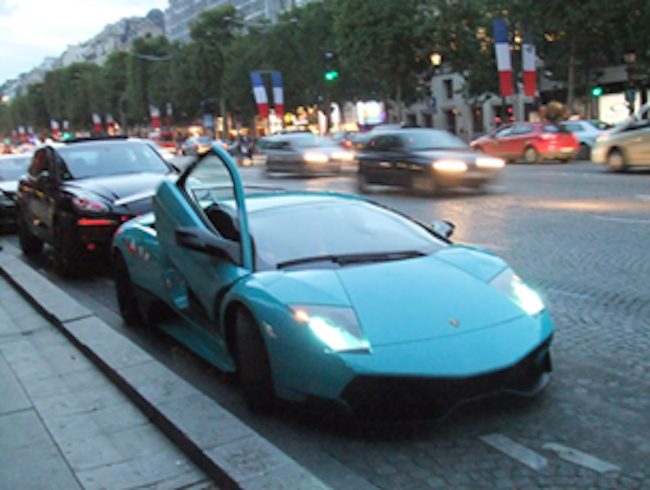 “Holy cow!”, he gasped, as we approached Beaubourg from rue Rambuteau at the corner at Rue du Renard. Eyes wide, he pointed to the back of Centre Pompidou. “What IS that? It looks like a rainbow that threw up!” After five days in Paris, his eye had become attuned to surprises and his sense of astonishment awakened. We had systematically exposed another 12-year-old grandchild to the wonders of our favorite city. In our travels across Paris, we had identified activities that could build on what these kids already knew, introduce them to uniquely Parisian pleasures, create cultural opportunities, offer insights on how to master a foreign city, and provide memories of joy and discovery that have lasted for years. We did it through tuning in to transportation, heights, art, learning opportunities, and pleasures. 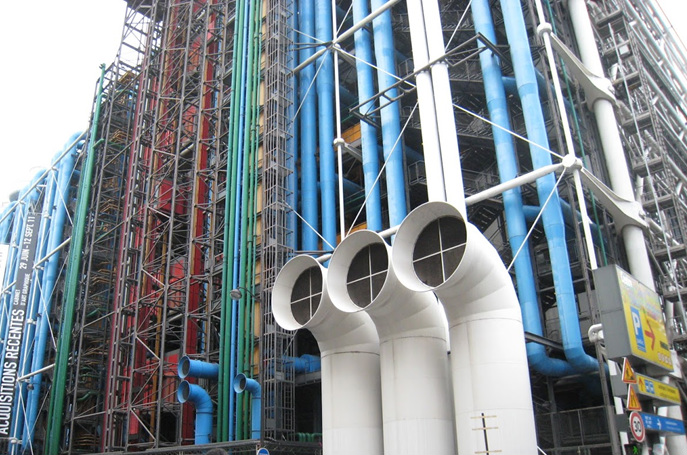 Nothing helps a child become oriented in space as quickly or as well as mastery of modes of transportation, including their own two feet, in order to move between destinations. In Paris, identifying routes on the maps at bus stops, metro or RER stations (as well as on a phone or paper map), helps them practice understanding how the snail design of the 20 arrondissements of Paris works and introduces them to the city’s neighborhoods. 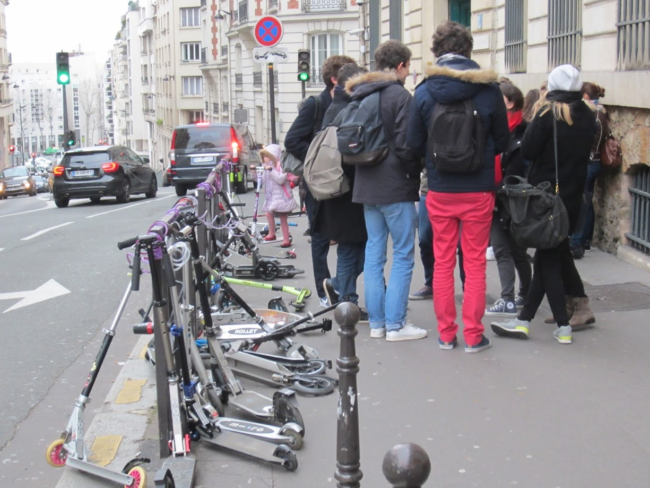 In Paris, scooters in front of a school. Photo: David Griff

Watching people make their way on scooters, skates, and segways; on personal and public bicycles; on traditional and three-wheeled motorcycles; in cars, buses, taxis and trains; and on boats that carry tourists up and down the Seine, they appreciate the range of ways people connect to Paris’s unique physical world.

They notice the lines of electric cars that rent by the hour, count the number of Smart cars or other two-seaters that challenge the limits of parking spaces along curbs, or stare as a Lamborghini lowers its top or a Twizzy reveals a single seat behind the driver. The options and opportunities of transportation can broaden perspective and transform a feeling of being lost into one of knowing how to make one’s way where so much seems so new. 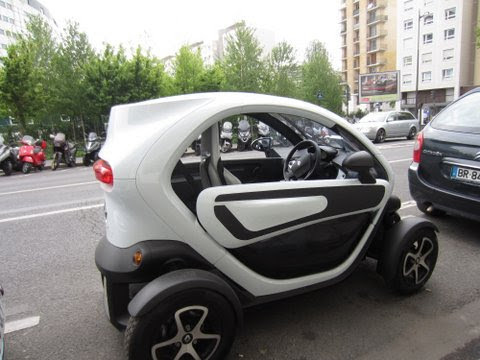 Looking down on Paris monuments and rooftops from a variety of heights and locations also helps integrate an internal map of the city. Identifying landmarks from many points of view fosters familiarity and, with it, a sense of mastery. The greater the physical effort used in reaching the heights, the greater the sense of connection to them. Waiting in the queue at the southwest pillar of the Eiffel Tower means you can purchase a same-day ticket to scramble up 328 steps to the first level, registering landscape changes through the scaffolding as you go, as well as allowing you to pick a day with the good visibility and weather you want for your visit to Paris’s universally recognized attraction. 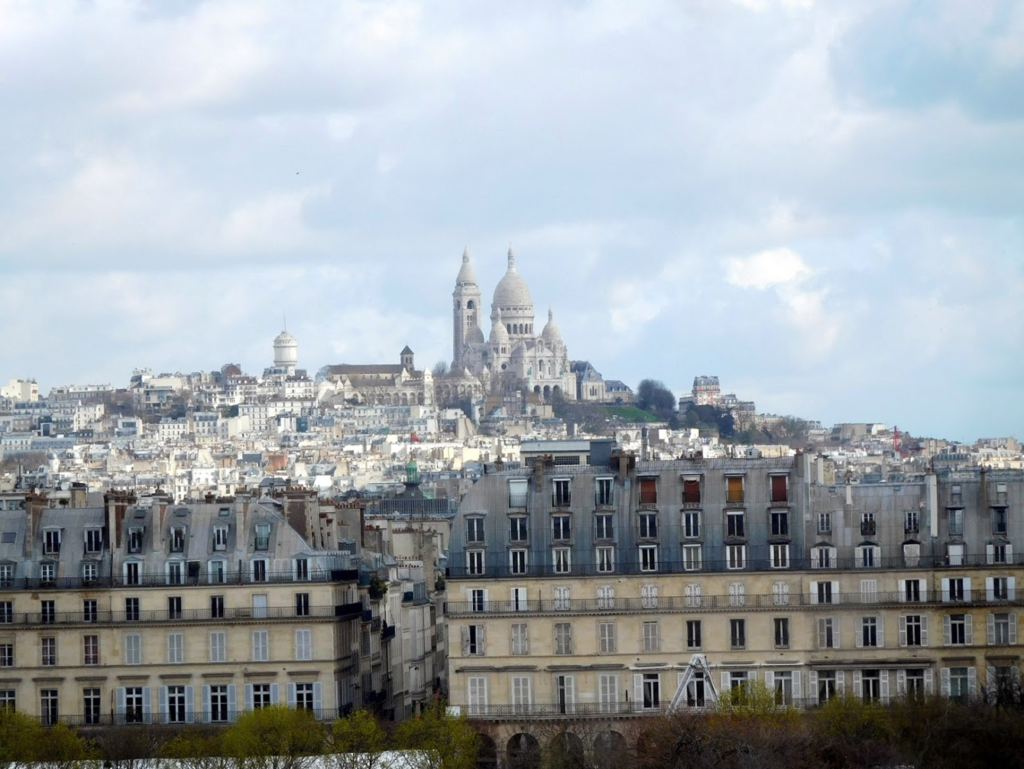 Enduring the long line to climb the towers of Notre Dame not only rewards hardy visitors with close-ups of gargoyles, statues of saints, and the enormous church bell, but also offers orientation from the original center of the city. Trudging up the stairs of l’Arc de Triomphe terminates with spectacular 360 degree views from l’Etoile, 12 boulevards radiating out symmetrically, traffic seemingly chaotic (unless you understand le code de la route), and a new appreciation of the design of the city from the Louvre to La Défense, a medieval palace on one side and a futuristic landscape of 21st century skyscrapers on the other. 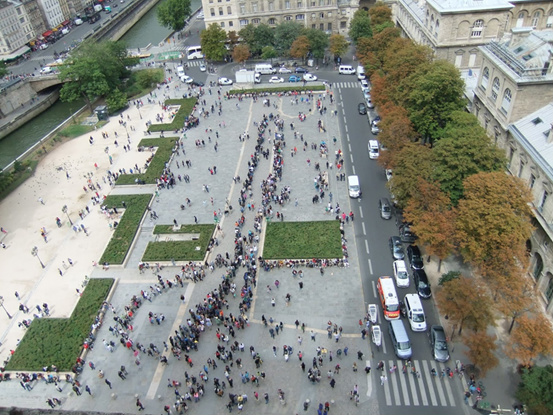 As seen from the towers of Notre Dame cathedral, lines down below. Photo: David Griff

Add a trip up the connecting escalators that diagonally cross Centre Pompidou, watching as rooftops slowly appear; catch the view from the top of the Boulevard Haussmann buildings of Galeries Lafayette or Printemps; take a ride in the funicular alongside the steps going up to Sacré Coeur, or a lift in the hot-air balloon at Parc André Citroën that hovers over the western edge of Paris, and the sense of the city begins to expand rather than overwhelm as perspectives literally change. 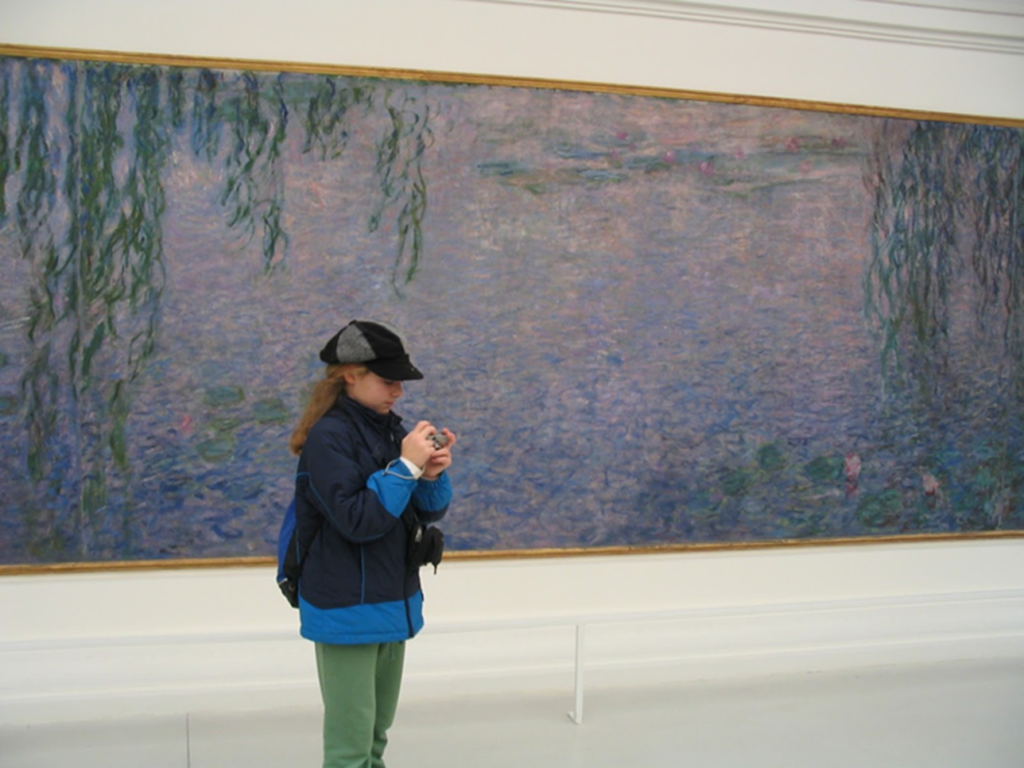 Many children and teens have heard of de Vinci’s Mona Lisa, but the art museums of Paris and their collections include far more than the Louvre, with its more than 35,000 pieces of art. The child, tween, or teen who already has an interest in art can follow whatever styles, periods, mediums or artists they prefer, selecting museums or galleries that feature them. Special exhibits can be extraordinary: a social history seen through a Barbie retrospective at Musée de la Mode; the evolution of children’s literature through Babar at Musée des Arts Decoratifs; an analysis of expressions in the Burghers du Calais at Musée Rodin; trying on a hoop skirt at Palais Galliera; making art along with French children during les vacances scolaires. 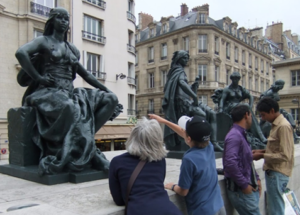 That said, fun can definitely be had in navigating challenges of the largest museum in the world. I love to start on the lower ground floor at the Medieval Louvre, where the walls and pillars of the original palace were unearthed during excavation to provide for underground parking. The area ends with a sphinx silently announcing the Egyptian wing. A left turn leads to an impressive walk through ancient history, arriving eventually, after rows of sarcophagi, at the rare swaddled mummy. In the opposite direction, statues of Greek gods and goddesses charm the child who has read Percy Jackson’s stories of Mount Olympus. They recognize each superhero through its symbols carved into the marble alongside the figure. Not much further, the iconic Victory at Samothrace, Venus de Milo and Mona Lisa are “musts”. Ironically, the main thrill of the latter is to get close enough to take a photo. But with a turn to look behind them, a child sees the enormous “Wedding Feast at Cana” and can engage in all kinds of discussion of a painter’s perspective, interpretation of story, and role in history. 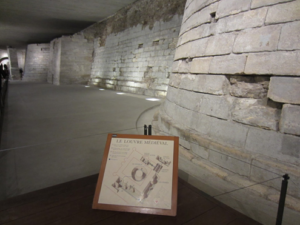 Some children naturally mimic models’ poses; others imagine what the figures in a painting or sculpture are thinking or feeling; and some prefer to search for an artwork that they earlier identified online or in a book before they had ever left home, Treasure Hunt style.

In addition to the Louvre, all six of our grandchildren found Les Nymphéas at the Orangerie mesmerizing and the architectural models of the building’s serial transformations intriguing. At Musée d’Orsay, they walked across the glass floor on top of a model of the neighborhood surrounding Opéra Garnier and peered through the giant clock they recognized from the film “Hugo”. Outside, they paused to puzzle the identities of the six continents represented by the statues that lead to Entrance C, the one dedicated to those with Museum Pass privileges. Our more curious children found the permanent collections at Centre Pompidou sometimes provocative, sometimes playful; the street performers on the Esplanade Georges Pompidou intriguing; and the adjacent Stravinsky fountains amusing. 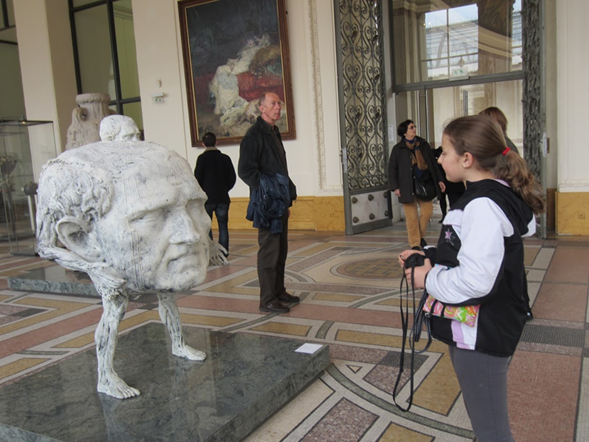 A child learns about itself, its world, and itself as a part of its world from foreign travel. There are all those big lessons, like the ways in which diversity manifests through architecture, apparel, and especially across the population; values like attractiveness and sustainability are expressed through city management; and preferences point people in different directions. One grandchild was intrigued by the people in green uniforms who maintain the city, from replacing bulbs in lamp posts to washing streets and weeding gardens. Another observed that the French had a commitment to the environment when she discovered minuteries that automatically turn lights out and recycling stations that are parked in different neighborhood at regular times. 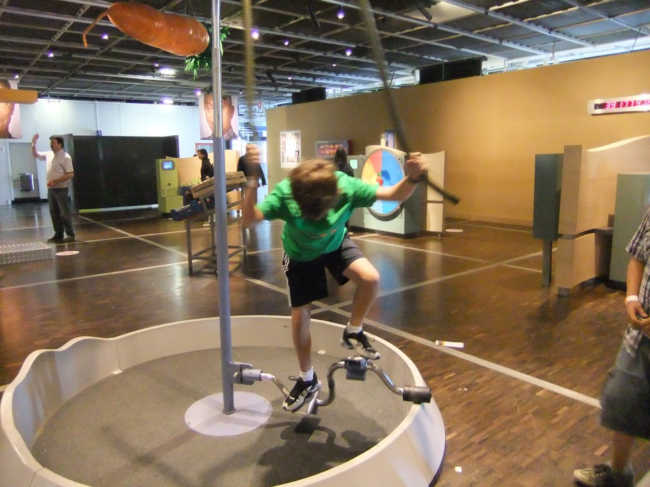 More formally, Paris, with a knack for presentation, offers targeted learning for the child who likes help picking up new information, ways of doing something, or insight into how the world works. All six of our grandchildren rated their day spent at Cité des Sciences et de l’Industrie among the top three experiences in Paris. This enormous structure sits on the edge of Parc de la Villette, with its creative “folies” for climbing and conversation. It houses hands-on activities for those aged two to 102. Most offer English translations or are intuitively clear. 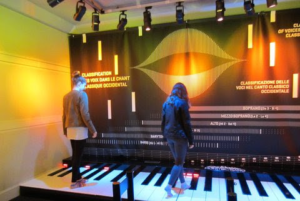 From playing 3-D tic-tac-toe to tossing tennis balls in the Centrifugal Force spinning room to playing percussion on a virtual drum set, the permanent displays rival extraordinary temporary expos for their capacity to engage. In the latter, we have navigated a landscape wearing glasses that simulate the experience of inebriation, explored the worlds of computer games and of special effects for films, and tried to keep a straight face while playing poker, insisting “I have no aces” with three of them in one hand as we gazed into our opponents eyes.

Other opportunities to challenge abilities and expand comprehension of our physical and personal world abound. Visits in central Paris to Palais de la Découverte or Musée de l’Homme, both filled with hands-on explorations, are also likely to nourish curiosity and expand horizons. 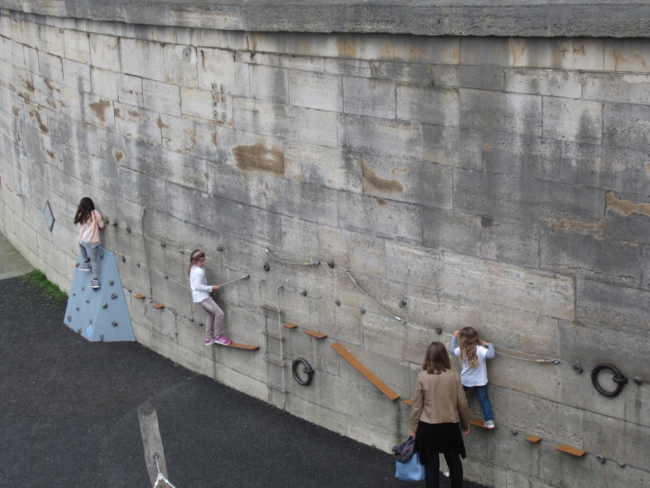 Everywhere, Paris respects “le Plaisir”. If a child can identify and expand this repertoire of pleasures, the City of Light will have worked a good bit of its magic. I have written about discovering the pleasures of French food. Any introduction to Paris should also include the pleasures of movement, sound, play, and shopping. In addition to the transportation options to explore, already described, Paris is a place to walk, climb, run, jump, ride, and dance. Follow the river, especially along the Left Bank between Pont de l’Alma and the Musée d’Orsay, where the quays offer activities from a climbing wall to hopscotch. Run around the edges of a grand parc or across one of the pedestrian bridges. Jump on the trampolines in the Tuileries or on the electric battery charger at the Renault showroom. (One of our favorite evening activities is a visit to the car showrooms along the Champs Elysées, with innovative models and interactive games.) Explore the Jardin d’Acclimatation, a paradise of a playground in the Bois de Boulogne, that was extensively renovated in 2018. 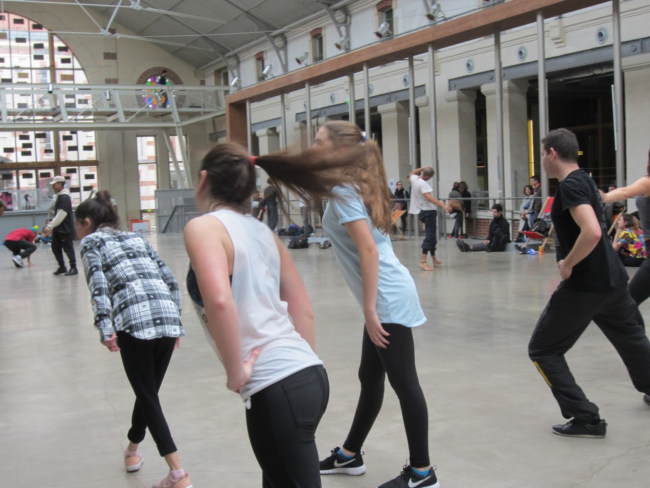 Venture out to Centquatre, where street performers practice their arts in a converted mausoleum. Search for enormous street murals in the XIIIè and smaller pieces in the Upper Marais. Listen to the chimes of the church bells, the concerts that take place across the city, the charm of languages from around the world that are spoken all around you. Combine movement and sound with a ride on a Carousel or taking in the Friday afternoon fashion show at Galeries Lafayette. Practice saying the essential “Bonjour Madame, Bonjour Monsieur” with each encounter. And try out the sporting goods equipment in Décathalon, the gadgets at Pylones, the angle of a camera while capturing images to take home. 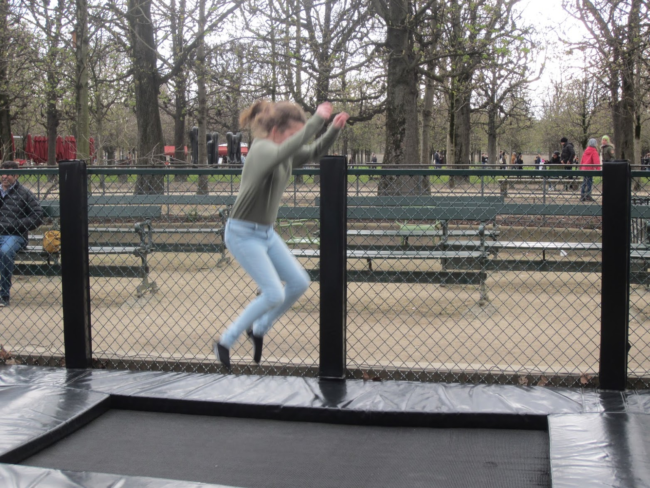 Jumping on the trampolines in the Jardin des Tuileries. Photo: David Griff

Enjoy the rush of buying a souvenir in a foreign language and currency, the delight of attending a special event because you just happen to be in Paris during Bastille Day or the Salon d’Agriculture, the Foire de Paris, the Salon du Chocolat, the biennial auto show, the Paris Marathon, the end of the Tour de France, or the Roland Garros tennis matches. Embrace the surprise, whimsy, delight and beauty that Paris offers all the senses at every turn. And allow the feelings to help you and your teen or tween embrace being fully alive, together.