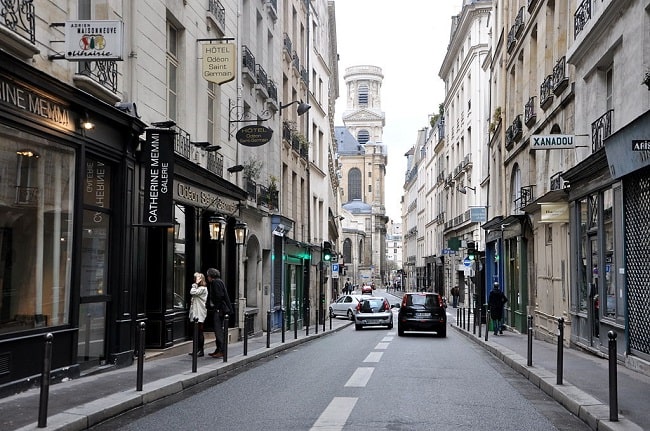 You know what is the best thing about each and every street in Paris? No matter how short, even if it’s just a block, it holds a story waiting to be discovered. The Rue Saint-Sulpice in Saint-Germain-des-Près may have been named for the church that runs alongside it, but it has its own rather racy secrets of its own. At just over 950 feet long, stretching from the heart of Odéon to the Place Saint-Sulpice, the ancient street was once swallowed up by the 16th century church, abbey and cemetery. 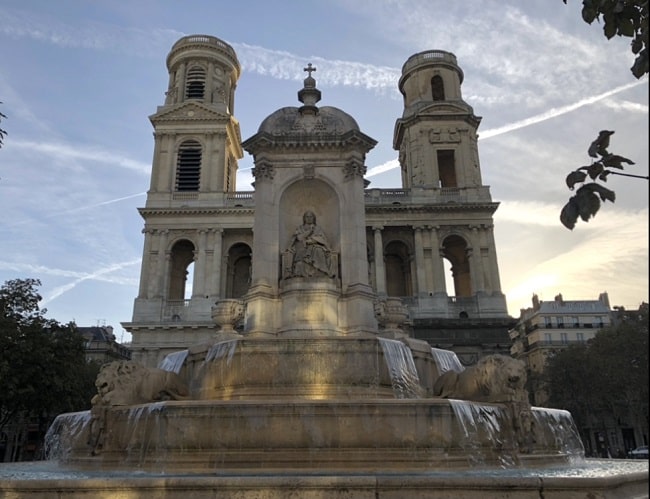 The original church was built during the 13th century and was added onto for more than 350 years. With the nearby Abbaye de Saint-Germain-des-Près, the entire area was dedicated to the faithful and left little room for anything else. In 1641, catholic priest Jean-Jacques Olier heard that the church was falling into disrepair and came to Paris to reform the church and create a seminary. The ancient church was demolished and in 1646, Anne of Austria laid the cornerstone of what would be one of the most stunning churches in Paris. She was the wife of Louis XIII and mother of Louis XIV; the young Sun King was only four years old at the time of his father’s death. Crowned King but too young to serve, his mother was named Queen Regent. To keep herself in the favor of the country, she spent a lot of time visiting churches and religious sites. Being asked to lay the first stone was just what she needed to ingratiate herself with the people. 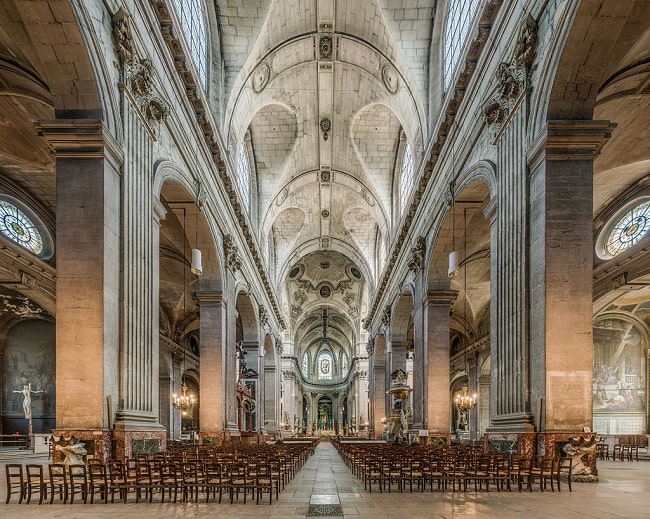 Today the second largest church in Paris after Notre-Dame cathedral, it is the site for the many religious holidays that once took place in Notre Dame de Paris and even the national funeral of Jacques Chirac. While the outside with its mismatched towers didn’t attract much praise from the writers that frequented the district, the beautiful inside will convert even the most cynical tourists.

As soon as you enter, in the Chapelle des Saints-Anges you will discover three frescos by Eugène Delacroix: Heliodorus Driven from the Temple, Jacob Wrestling the Angel, and above your head, Saint Michael Slaying the Dragon. Spending eight years on these paintings towards the end of his life, he would walk over everyday from his nearby home on Rue de Furstemberg until they were completed in 1861. Telling a friend in a letter that the project might kill him, he would live just under two years more before taking his last breath. The frescoes are stunning but the treasures of Saint Sulpice do not end there. 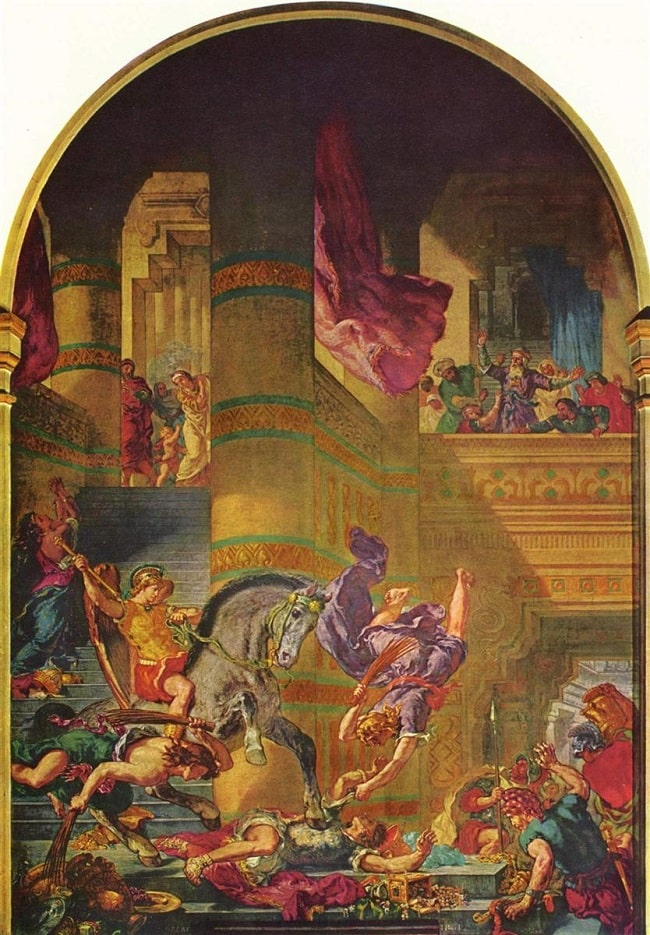 Near the entrance, against two pillars at the end of the nave, are two holy water fonts, topped with a large shells. But these aren’t just any old shells. This pair was given to François I, King of France from 1515 to 1547, by the Republic of Venice. They were kept within the Crown treasures until 1745 when Louis XV gave them to Jean-Baptiste Languet de Gergy, the parish priest of Saint Sulpice. In 1774, French sculptor Jean-Baptiste Pigalle would create a base for each of the Conchata Imbricata shells that would keep the maritime theme. Sea life can be seen carved on the marble base that hold up these exquisite shells. Luckily they were removed in 1793 during the French Revolution and survived the destruction that was seen all over Paris. Since 1802, they have stood at the entrance of the nave. There are so many great treasures in Paris hidden behind glass, but these two dating back more than 450 years are right there for you to reach out and touch. (And you can even get a spiritual cleansing at the same time.) 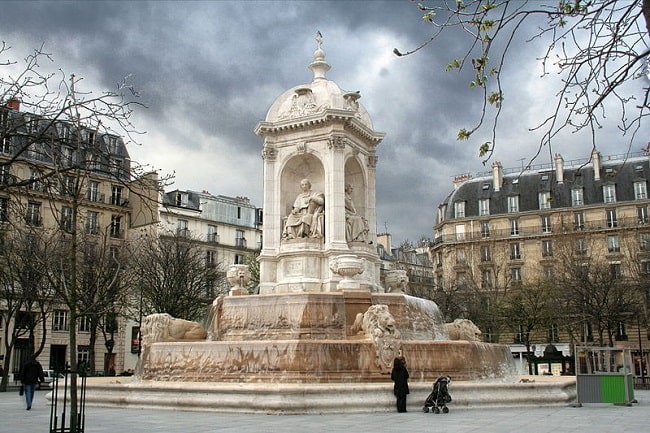 Just outside the door on the Place Saint-Sulpice it is hard to miss the large fountain surrounded by the “angriest lions in Paris” as Ernest Hemingway called them. The Fontaine of the Four Cardinals by Louis Visconti was built in 1843 and on a sunny day the sun sparkles off the water making the surrounding benches one of the best seats in Paris. Visconti created the fountain with four statues of French bishops, none of which became Cardinals, but let’s not nitpick, shall we? Hemingway would sit at the nearby Café de la Mairie after walking a short distance from his home on Rue Férou with second wife Pauline Pfeiffer. With notebook in hand he would sit on the terrace overlooking Saint-Sulpice and note the pigeons that would spend their morning sitting on the bishops’ heads before moving down to the angry lions that clearly didn’t scare them.

The Café de la Mairie with its prime location is a wonderful spot for a coffee in the morning and even better for the late afternoon glass of wine on a sunny day. While it is just a few blocks from Les Deux Magots and Café de Flore, on any given day you could have found one of the many expatriate writers that called the area their home. Besides Hemingway, F. Scott Fitzgerald, Samuel Beckett and William Faulkner would all count the Café de la Mairie as one of their favorites. In 1951 Jean-Paul Sartre and Albert Camus had been working on Combat, the radical left-wing paper, when they got into an argument at the café and the two would never speak again. 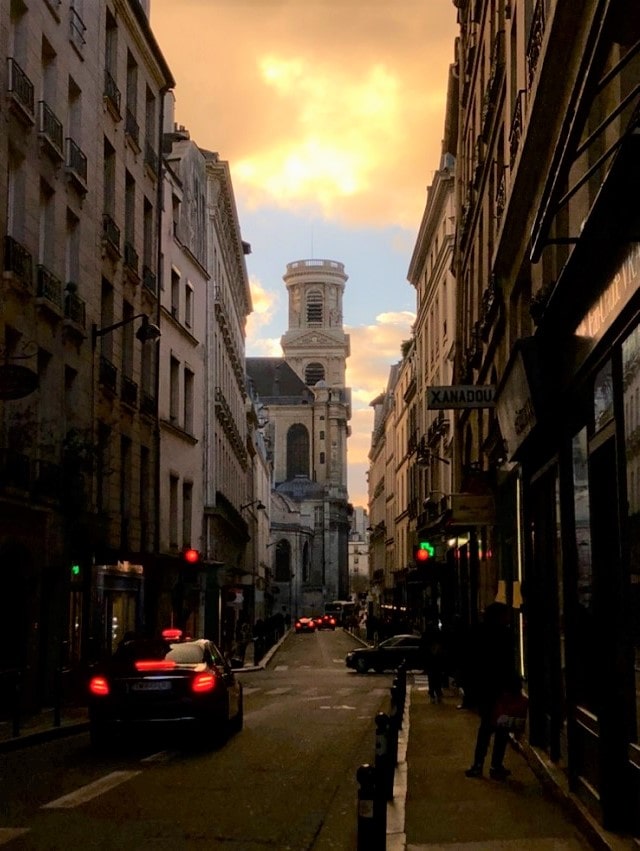 After you have had your fill of coffee or Bordeaux, head back down Rue Saint-Sulpice and step back in time to a slightly more scandalous past. During the Belle Époque and after World War I, more than 180 maisons closes dotted the Paris vista. Legal and controlled by the state, they could be found all over Paris and especially on Rue Saint-Sulpice. These brothels operated by women would cater to every kind of clientele including the priests of the nearby church. One just needed to pick up a copy of La Guide Rose to find the addresses of these hidden establishments and what they specialized in. Four establishments could be found within a few blocks of each other and each had their faithful followers. At no 7, the Abbey catered to the clergy of Saint-Sulpice and each room had its own specific theme. The cross of Saint-André hung over the torture room, filled with chains, hooks and ropes. A confessional covered in red velvet would reverse the role of the priest and the parishioner looking for some absolvance.

Chez Christiane at no 26 was for those looking for an even more torturous good time: fetishes and special passions as listed in La Guide Rose. Nothing was left out of the imagination here or frowned upon. At no 15, located in a former hamman on the 2nd floor, Alys whose name is still emblazoned in tiles at the entrance, ran a small brothel with a few but very popular girls. 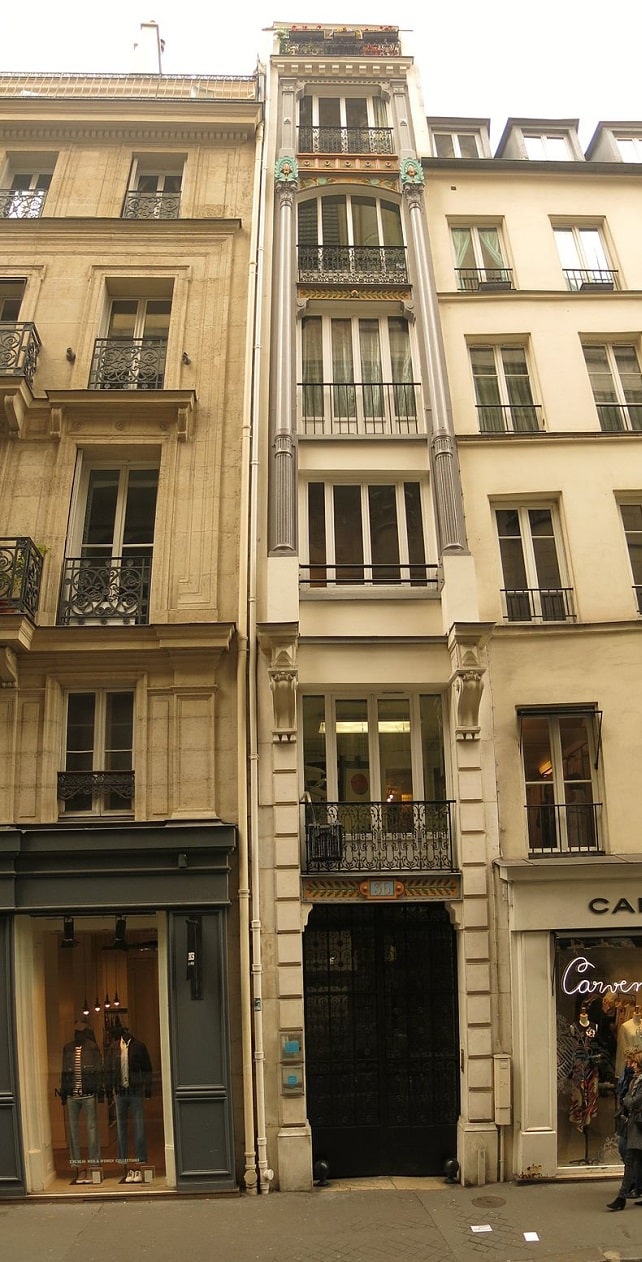 However there is one lady that ruled the roost on Rue Saint Sulpice. At no 36, Miss Betty was located in the very narrow building just opposite the north side door of the church. Miss Betty and her ladies would only service the priests of the two nearby parishes. The quick walk from one to the other up to the 2nd floor where they could take part in any fantasy they wanted just in time to return to the church, say a quick prayer and some holy water to wash their sins away. Still to this day, her name is on the floor at the entrance where, if timed just right, you may walk right in to catch a peak, but don’t venture too high up; Miss Betty isn’t there anymore. Remaining all these many years later is the small clue that would tip off the keen observer to find these establishments. It was decreed that they had to note in a discreet way exactly what they were and most would choose a simple way to do it. On the exterior of the building, the number of their address was normally just a little larger than any others and some, like Miss Betty, chose to fancy hers up just a bit. Look up at no 36 and see the light blue and gold number that the many owners since have kept as a little nod to the past of Rue Saint-Sulpice.

Rue Saint-Sulpice always holds a special place in my heart as I have stayed on this street many times. Starting or ending any day in the Saint-Sulpice church, catching the changing light of the day dance across the walls, is one of my favorite things to do. I have been incredibly lucky to have taken guided tours up the facade and down into the ancient crypt below the church. Check my Instagram @claudinebleublonderouge for all the inside secrets.

For more articles in our “Streets and Stories” series about Paris, click here 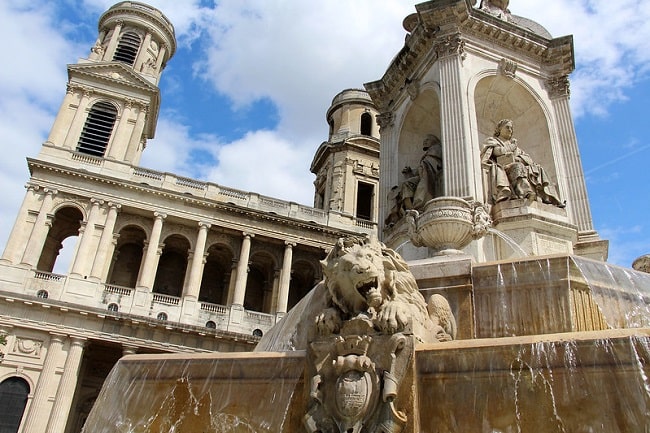