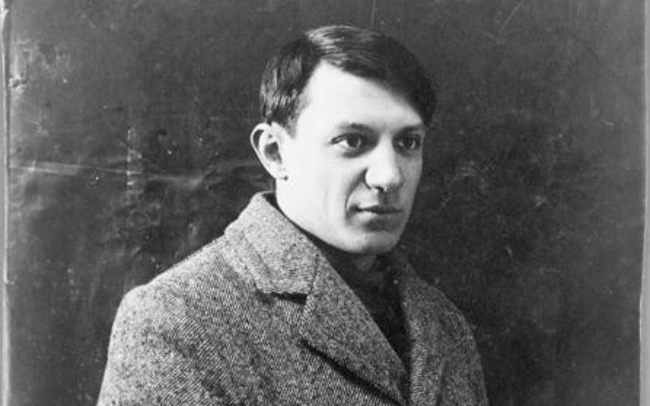 If you will be spending the first weeks of January in Paris, escape the winter chill and make sure you catch these two amazing Picasso exhibits before they close.

Picasso arrived with his friend and fellow painter Carlos Casagemas at the gare d’Orsay on his first trip to Paris in October 1900. With his painting The Last Moment under his arm to represent Spain at the Paris International Exhibition, he walked out of the gare and into history. Today that train station is now one of the best museums in the world, the Musée d’Orsay, and until the 6th of January it’s holding a retrospective of his blue and rose periods.

At the start of the exhibit, you see many self-portraits he painted in 1901, at the age of 19. They carry the influence Paris had on him from the first day he arrived. In Paris, Picasso discovered the romantic paintings of Eugène Delacroix and Jacques-Louis David and works by Gustave Courbet, Edward Manet, the Impressionists, Toulouse-Lautrec and Van Gogh. Yo Picasso– painted in the spring of 1901 with its layers of thick paint and bright orange scarf– looks more like a Van Gogh then a Picasso. Only a few months later in the winter of 1901 his self-portrait became darker and more subdued with hallowed cheeks, dark coat and piercing gaze, which also signaled the start of what would be known as his Blue Period. 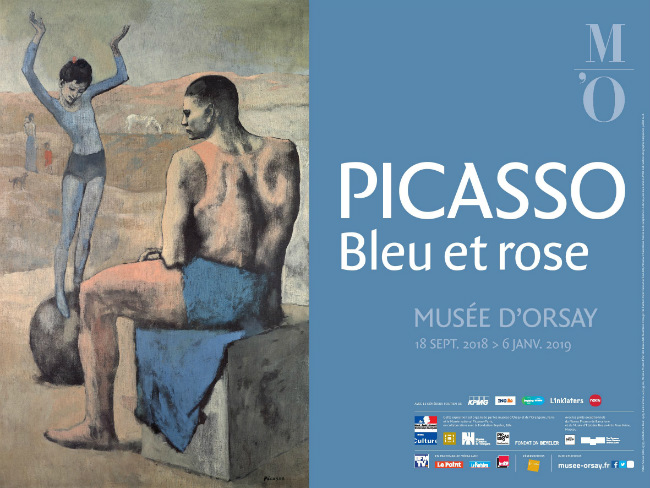 This period with its sad and depressing colors was a reaction to the death of his friend Carlos Casagemas who killed himself in a Montmartre restaurant on February 17, 1901. A tale of unrequited love that left a lasting sadness with Picasso, that some say he never was able to get past. I first came across the story when researching the Picasso sculpture by Église St Germain de Près and was struck with how sad the story of Carlos Casagemas was. Following his death Picasso had returned to Paris and stayed in the studio of Casagemas; it is here he prepared for an upcoming show while in the depths of depression. The room dedicated to these paintings is stunning and the sadness oozes from the canvases. Le Mort de Casagema was the departure from the dark colors. The face of his friend, with the bullet wound visible on his temple, surrounded by bright color of yellow, red and orange could be seen as a nod to Van Gogh who had also committed suicide. Évocation (L’enterrement de Casagemas) painted in 1901 is an amazing piece reminiscent of a floating dreamlike Chagall painting. As they lay Carlos to rest, the sky above is filled with images of nude women and a sense of lightness.

Affecting Picasso for years, it showed in his paintings from such an early period in his career. That may be most visible in his 1903 painting, La Vie. A young man and woman standing nude, gesturing towards a painting of a naked couple holding each other while a woman holding a baby looks at them. The figure of the man was at first a self-portrait of Picasso, but he later changed it to the face of Carlos. In his arms, the woman is the source of his heartache and suicide, Germaine Pichot. However, it is what is under this painting that is truly remarkable. An x-ray of the painting in 2012 revealed that Picasso had painted over his Le Dernier Moment, the painting that first brought him to Paris. The painting was inspired by the death of his sister Conchita who died at the age of 7 in 1895 of diphtheria. Picasso was known to have painted over many of his works over the years, but to pick the subject of La Vie, to be layered of Le Dernier Moment, is rather sad and poetic. 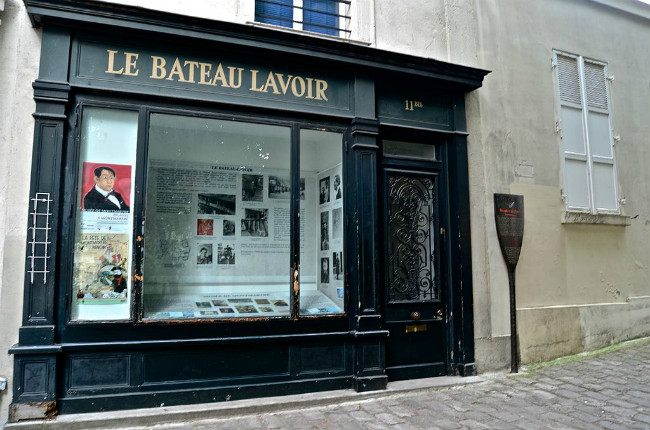 By 1904 he had moved back to Paris and was staying at the now iconic Bateau-Lavoir in Montmartre living among the artists, writers and poet. It was here he began to dig himself out of his depression and the Rose Period was born. Inspired by the Medrano Circus on the Rue des Martyrs, he began to paint in pink hues. Depicting the images of families and circus life was a more uplifting subject. It was his first foray into painting Harlequins that you will see later at the next museum.

The exhibit concludes with his Ochre Period. Inspired by Jean-Auguste-Dominique Ingres, Picasso would take on a large scale painting but later deserted the idea. What would come of it is a series based on the theme The Watering Place. Boy Leading a Horse is one in the series; at over seven feet tall with just the figure of a horse and a boy against a vast desert, the ochre colors and simplicity is a change from his darker years. It is in this period he began to discover the female nude through the eyes of Gauguin. The final paintings, La Toilette and La Coiffure both are based on the theme of hairdressing and inspired by The Turkish Bath, by Ingres, that Picasso saw at the Salon d’Automne in 1905. The theme will be seen again in a grand piece seen at the next exhibit.

The Musée d’Orsay did an amazing job with this exhibition and there is so much more to it than mentioned here. If you can’t make it to Paris by January 6th, download the special exhibition app. It’s a fantastic way to learn of some of the details on some of these amazing works of art.

Now let us head on over to the Marais and the Musée Picasso Paris to see Picasso. Chefs-D’oeuvre!, on display until the 13th of January. The collection of  masterpieces includes everything from sculptures, paintings, objects, lithographs and drawings. Giving the moniker of “masterpiece” to a large handful of pieces when Pablo Picasso created so many is a task few would want to take on.
At the age of 16, while studying in Barcelona at the Llotja school of art and design, Picasso painted Science et Charité. What can be seen as his closest work to that of classical art painting and theme, and one he would rarely return to. The subject of the ill lying in bed dying mirrors the personal loss he had of his sister in 1895. His father served as the model for the doctor. Presenting this work at the Provincial Exhibition of Malaga he would receive a gold medal and also the appreciation of his father who was an art teacher and painter. This work clearly meant something to Picasso as he held onto it most of his life and brought it with him as he moved from house to house. It was not until 1970, three years before his death that he finally parted with it, donating it to the Musée Picasso Barcelona. Through this exhibit, it is the first time it has publicly been on view in Paris.

The subject of Harlequins was first seen in 1904 and in 1923 he would revisit it again. Still fascinated by the circus and the Commedia dell’arte he would create a series of paintings with the single subject in the same pose repeatedly. Picasso used the face of his friend and Spanish artist, Jacinto Salvadó, for each painting, dressing him as an acrobat. In the Arlequin, he is seen in what appears to be unfinished, but in fact, Picasso intended it to only have a small spot of color. Arlequin assis shows him in his argyle clothing that was inspired from a costume he had seen in the studio of Jean Cocteau. The subject is seated in a chair that he had also painted his first wife Olga Koklova in for Olga in a Chair in 1917. 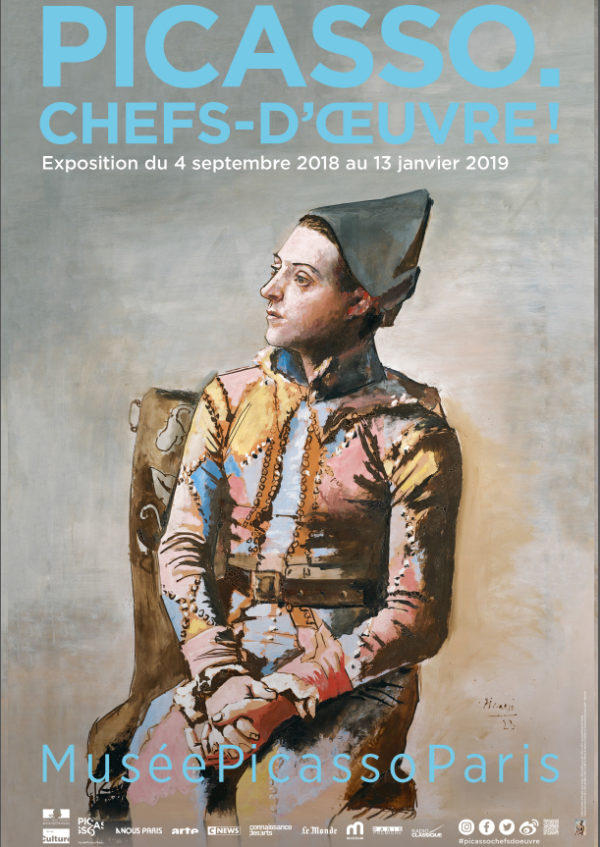 The exhibit also shows a wide range of objects that Picasso would turn into art. Sketching on menus, back of cards and cardboards, bending wire and bottle caps, all part of a vast collection held by his former lover Dora Maar. Photographed by request of Picasso, they would largely go unseen until included in the 1949 Les Sculptures de Picasso by art dealer Daniel-Henry Kahnweiler. By 1998 and the public auction of the Collection of Dora Maar, these pieces had garnered much notoriety.

One of the most striking pieces in the entire collection is Femmes á Leur Toilette. Created from 1937 to 1938 at his studio at 7 Rue des Grands Augustins in Paris, Picasso comes back to the theme of hairdressing. This time a combination of painting and cut colored paper. The three women shown are his loves and muses, Olga Koklova Picasso, Marie-Thérèse Walter and Dora Maar. They are gathered together in what would appear to be a sisterhood, after all they did share one thing over the years: the affection and infatuation of Pablo Picasso. He kept this painting to himself until he drew his last breath and in some ways, it defines much of what moved him his entire life.

Sculptures, personal belongings and photos round out this exhibit. The permanent collection housed here includes more of his works and his private collection of paintings from some of his friends and masters of art. Following your visit, stroll back to the left bank and down Rue des Grand Augustins in your striped shirt, breathe in the air, and feel the cobblestones he once walked down. Just make sure you end up on a terrace of a café with a glass of wine to reflect on the amazing things you were able to see that day.

Related articles:
Introducing Picasso’s Gang with a Tour of their Favorite Haunts
Picasso and the Women’s Prison of Saint-Lazare

Previous Article Les Bains: Discover a Legendary Nightclub within a Luxury Hotel
Next Article Who is Gwendal Poullennec? News from the Michelin Guides