Popcorn in Paris: Scarlett Johansson Opens Shop in the Marais 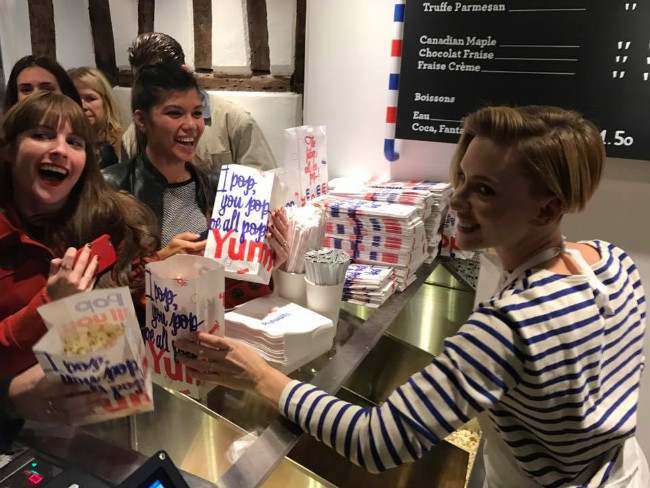 These days, it seems, everyone has a side hustle.

Etsy boutiques, dog walking services, babysitting wee ones, and hocking collectibles on eBay…the options are endless. And even celebrities know the art of the side hustle (though one must wonder if it’s done out of necessity, or purely passion), just ask actress Scarlett Johansson.

Johansson – who is known for her soul-stirring performances in films like Lost in Translation (Sofia Coppola), Ghost World (Terry Zwigoff), Vicky Cristina Barcelona (Woody Allen), The Horse Whisperer (Robert Redford), and many more – has been in the public eye since her film debut at age ten, when she played opposite a young Elijah Wood in North.

And now, she’ll also be known for her popcorn shop in Paris, which she is opening with her husband.

The film star is married to Frenchman Romain Dauriac, the owner of an independent ad agency. They were married in 2014 in Montana, and now split their time between New York and Paris. The couple has a child together, Rose Dorothy Dauriac. Johansson was chosen to be a brand ambassador for Moët & Chandon, and has done ads for French companies like Louis Vuitton and L’Oréal, so suffice to say her honorary French-ness is not an act, but a long time coming.


Their shop, Yummy Pop, had its soft opening over the weekend in the Marais (35 bis rue du Roi de Sicile). Like a crepe stand, the shop will feature both sweet and savory options, from a menu created by Will Horowitz of Ducks Eatery and Harry & Ida’s in New York City.

Johansson and Dauric were on-hand to serve eager customers popcorn over the weekend. And if the shop does well, the couple has stated that they plan to open additional locations.

Interestingly, the actress is not the only American-led popcorn game in town. Native Californian Kirstin Frederick, the American entrepreneur behind Le Camion qui Fume food truck, opened a popcorn place, Le Popcorn Bar, at Mk2 Bibliothèque. Frederick is known for having opened the first food truck in Paris.

Previous Article Enter an Arctic Fantasy this Christmas at Galeries Lafayette
Next Article Photo Essay: Paris is Paradise for Kids