A Guide to the Best 100% Gluten-Free Pastries in Paris 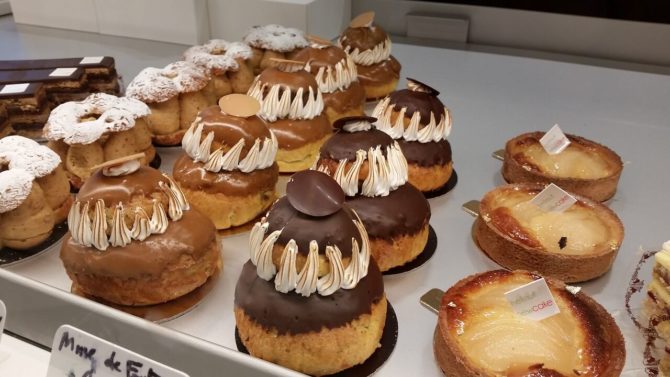 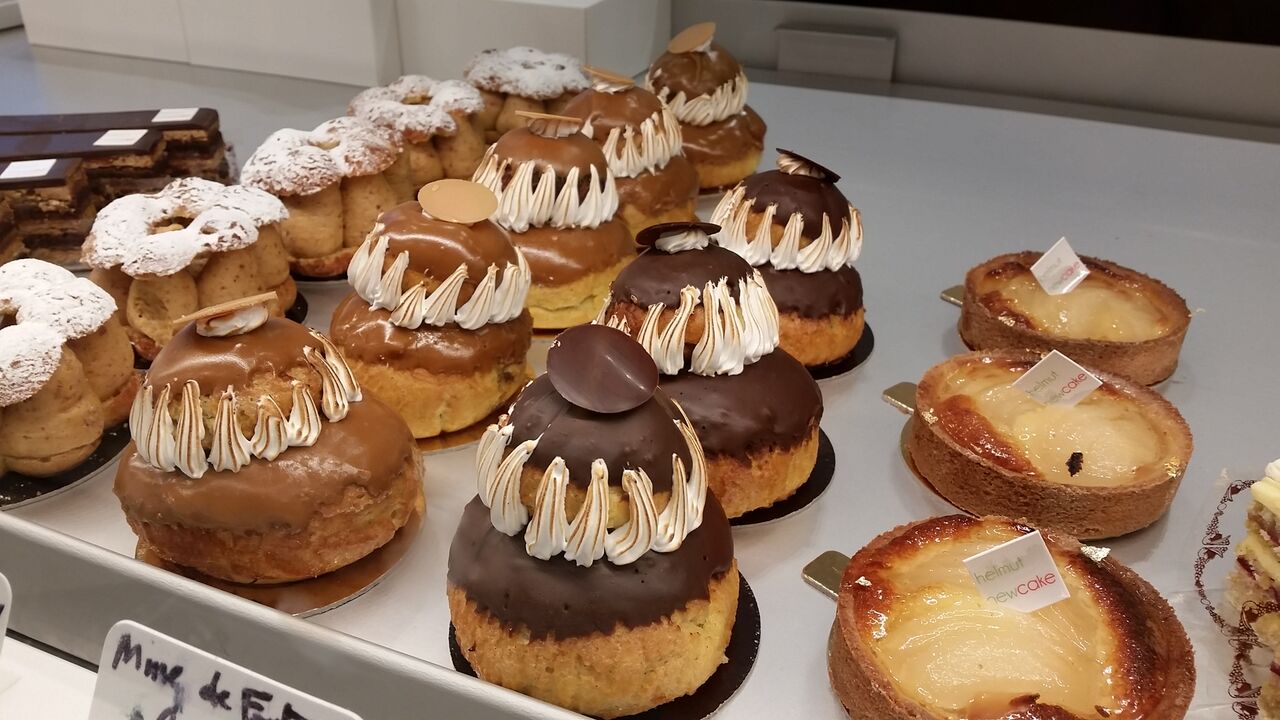 As a lover of Parisian macarons that are naturally gluten-free, I’ve never given much thought to the emerging world of sans gluten in Paris. As I love wheat in all forms, from bread to pastries, avec modération, it hasn’t yet been an issue to bar gluten from my diet.

In the space of just a few months, however, chalked signs of “ask for our gluten-free versions” are becoming quite the norm in Paris, from crêperies using 100% buckwheat flour to frozen food stores. Gluten-free bread is not just designated to health food markets these days: traditional boulangeries offering alternatives are also on the rise (couldn’t resist that one), as are a growing number of top patisseries.

But for those who are completely intolerant to gluten, it’s important that there is no risk of cross-contamination with products’ gluten counterparts.

The options are boundless in Paris where you can take away or sit and enjoy food in a growing number of 100% gluten-free restaurants, bistros, cafés, and grocery stores – out of which many sandwich, salad, and rice bars are jumping on the gluten-free bandwagon. Now bakeries and patisseries are joining in at an even faster rate – and taking it seriously at that.

Whether you’re intolerant to gluten or not, these five high-end 100% gluten-free patisseries will have you curious to taste something not just new, but with ingredients that will fascinate the taste-buds. 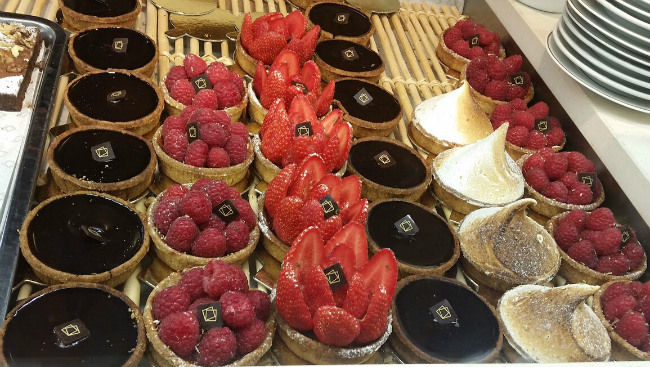 Walking into the Chambelland bakery it isn’t immediately apparent that the complete range of breads, cakes, cookies, chouquettes, and pastries are 100% gluten free and organic.

Nathaniel Doboin and Thomas Teffri-Chambelland did indeed rise to the challenge in 2014 when they set up this emerging segment specializing in 100% gluten free breads. To ensure their flours are entirely gluten-free, they even built their own mill (in the Haute-Provence region); flours are made from organic rice, buckwheat, sorghum and millet.

Although essentially a boulangerie, this bakery also offers pastries such as cheesecakes, lemon meringue and chocolate tartlets. I pounced on a chocolate lava cake, thinking that it would be like the flourless chocolate cakes we often make in France. Curiously, the molten chocolate was as expected but there was a hint of something different – was it buckwheat flour or rice flour? It can open up a new gluten-free tasting sense.

Chouquettes are labeled as “gourmands et légèeeeeeres”, along with muffins, brownies, and cookies. This poppy cookie made with rice flour, poppy seeds, sunflower and lemon zest was so packed with poppy seeds that it gave the flavors a whole new healthy tasting experience. 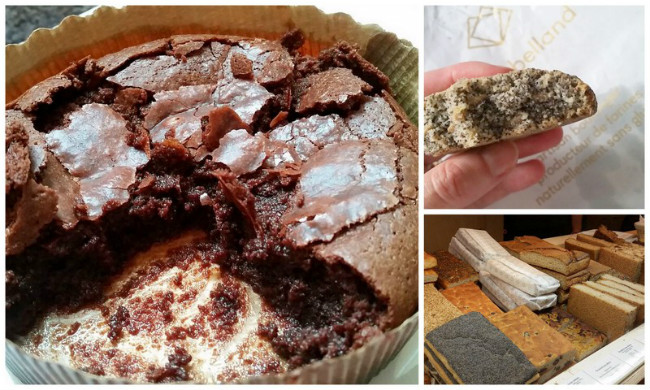 Following a flourishing opening of the first 100% gluten-free patisserie in Paris’s Canal Saint Martin area 5 years ago, this popular pastry shop and café recently moved to a new prestigious address near La Madeleine. Now it has opened its doors to a pop-up summer boutique located at the trendy Grand Train, centered around the railways in a converted locomotive depot in Paris’s 18th. With around 200,000 visitors expected until October, a whole new curious clientele will be put on track to the pastry world of sans gluten.

All the flour at Helmut Newcake is certified organic and 100% gluten free. As they add on their framed certificate, “It’s Gluten Free Paradise”.

Pastry chef Marie Tagliaferro – herself discovering she was a Celiac sufferer when she was 20 while working at Lenôtre – and husband François create and revisit the French pastry classics, many including sans lactose (dairy-free), such as Tartelette Normande, a pistachio tartlet with red currants, Paris-Brest (praline choux rings), éclairs and canelés.

Quiches, pizzas, burgers to risottos are proposed for lunch and reservations for Sunday brunch are recommended. 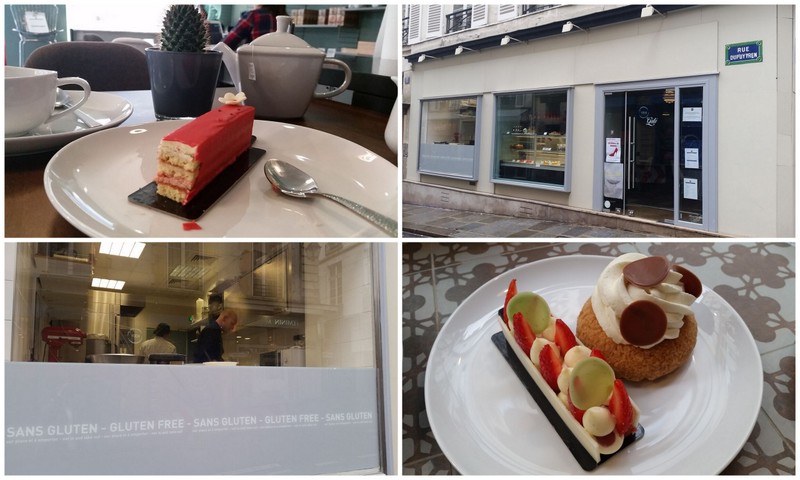 If you’re looking for a patisserie sans gluten then, like its French name Gâté, you’ll be spoiled. Open since September 2015, this completely gluten-free patisserie is just a couple of minutes walk from Odeon in Saint Germain-des-Prés. Founded by Emmanuel Grenier for his wife who is completely intolerant to gluten, the message is clear: for those allergic to gluten, there’s no cutting back on taste and variety for pastry lovers.

Pastry chef Anthony Denis and his team can be seen in the gluten-free lab from rue Dupuytren, preparing light pastries – with at least one option of dairy free and vegan – from ChouChou Fraises or Vanilla: choux buns with crunchy craquelin (crumble) toppings, strawberry tarts, chocolate opera cakes, and “Onde de Choc”, a sophisticated chocolate mousse encased with creamy and crunchy praline.

As the lounge’s décor had a cacti theme, I succumbed to their bright red “Crock Cactus”. If you particularly love white chocolate this is completely covered in it, encasing a lighter than light sponge interspersed with rhubarb and cactus compote. 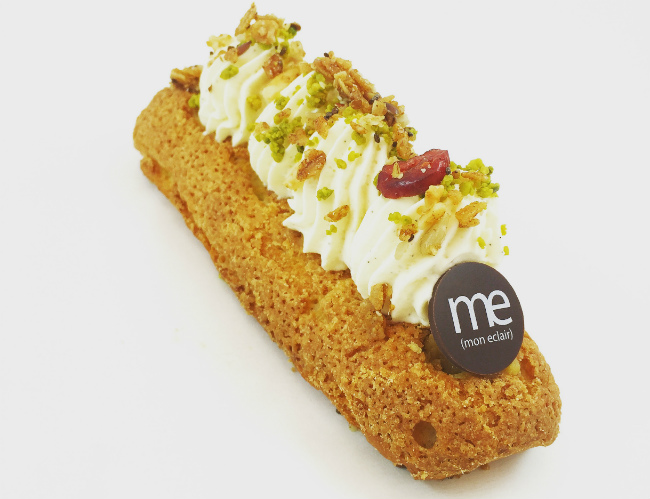 Since October 2015, chefs Grégory Cohen and Johanna Le Pape have been serving a deliciously unique gluten-free product and concept in Paris: by offering top quality fresh ingredients, customers design their own éclair on the spot. The éclair and all the bell-and-whistle fillings and toppings are entirely gluten-free: the éclair’s choux pastry base is made of both rice and corn flours, as an alternative to the classic.

There must be around 200 possibilities, as there are three stages to pick and choose to create your personalized éclair.

First off, choose your base filling: from candied lemon, praline, caramelized apples with almond, or passion fruit and mango. Next step, choose your cream: from lemon, vanilla ganache or cheesecake cream to caramel ganache; then finish it off with a gourmet topping such as lime meringue, marshmallow, coconut chips, caramelized almonds, to chocolate and caramel tuiles. 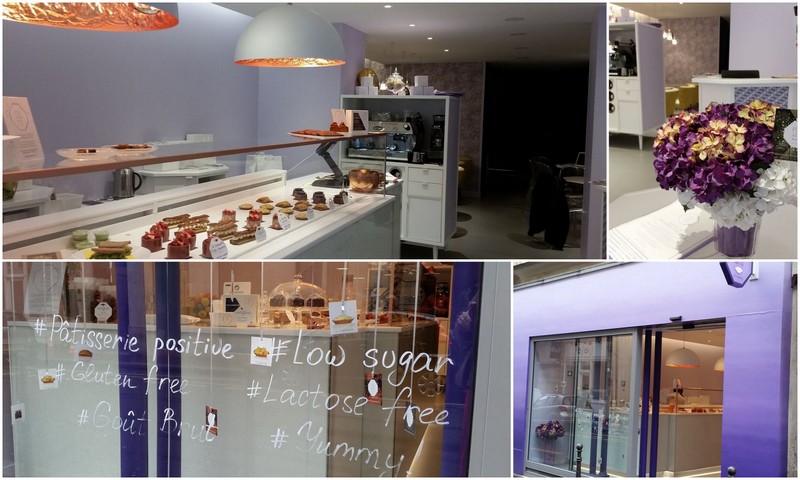 Newly opened in December 2015 between the Madeleine church and Rue Saint Honoré, this stylish, bright violet boutique oozes chic. From the inviting entrance with violet hydrangeas, healthy #hashtags and intriguing pastry postcards splashed on the window, the pastry counter leads through to a quiet and secluded tea salon.

I met the boutique’s founder, Marjorie Fourcade, who explained the concept behind Foucade. Discovering she was intolerant to wheat and dairy (lactose) plus problems related to sugar, she worked together with nutritionists for three years to create a healthy “Patisserie Positive”.

The result is a focus on top quality products for an all gluten-free cast with many pastries also dairy-free. Marjorie insists on using natural ingredients with contents both low in fat and sugars – without forgetting the utmost detail to taste and flavor. Emphasis is on fresh fruit and vegetables – yes, vegetables. No colorings are used: to achieve the vibrant crimson red on a Fraisier, for example, Japanese pastry chef Saori adds beetroot juice, its subtle presence can even be detected. 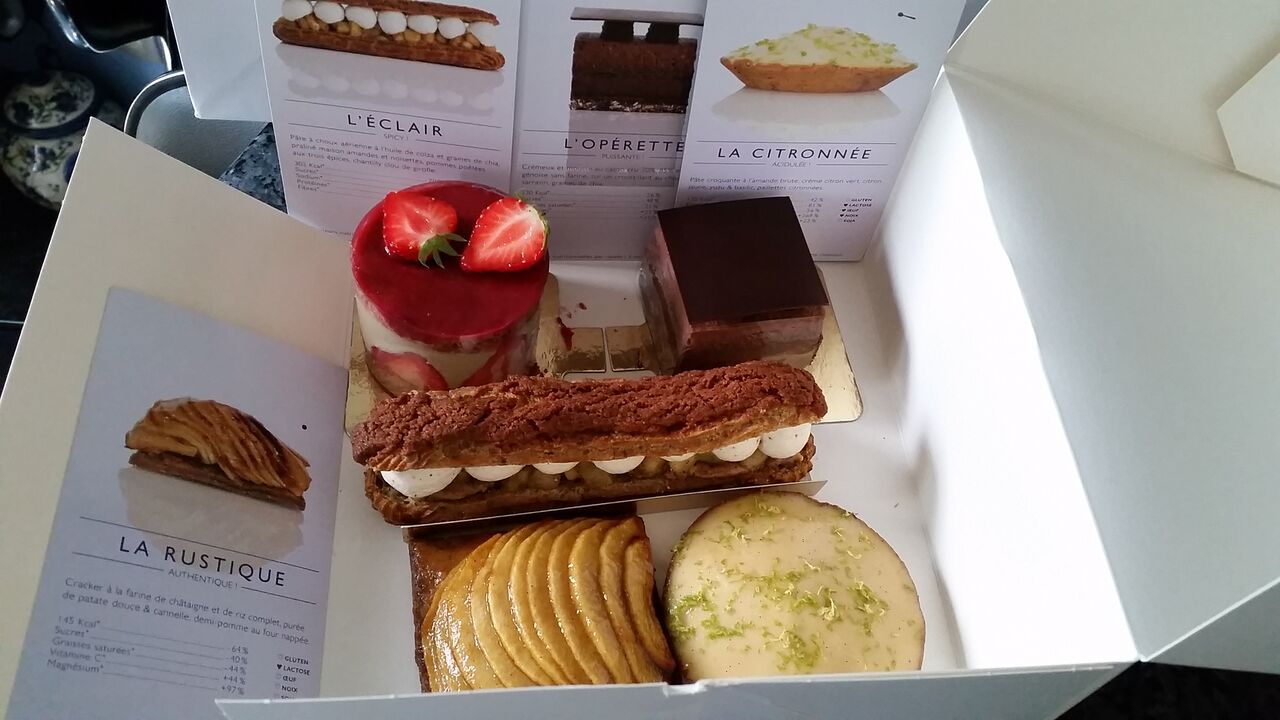 Each pastry comes with its corresponding postcard, detailing the nutritional facts – a touch that is no doubt greatly appreciated by any sensitive Celiac sufferer.

All pastries are very much reduced in sugar, allowing each ingredient to shine. A particular personal favorite to give you an example is La Rustique – crunchy base of chestnut flour and brown rice, sweet potato and cinnamon purée and topped with baked apple. I loved the different textures and although not powerful, the hint of sweet potato is a clever touch. At 145 calories, it’s apparently 64% less than its traditional pastry, with 40% less sugar and has 97% more Magnesium and 44% more vitamin C! No gluten, no egg, no nuts and no soya.

If you’re a real dark chocolate fan, then try the (also dairy-free) powerful l’Opérette, with a mixture of 70%, 85% and 100% raw cocoa for the most deliciously healthy protein boost.

For the more casual sweet-toothed pastry lover who is looking for gluten-free but not worried if near other traditional pastry versions, here are a couple of my favorite patisseries in Paris offering regular gluten-free alternatives.

Just around the corner from Gaté, Pierre Cluizel’s concept boutique centering round chocolate includes at least one gluten-free pastry. Pastry chef, Nicolas Bacheyre dreams up seasonal treats using an almond and hazelnut shortbread base for tarts such as Pear and Almond, Lime and Basil, and lately Wild Strawberry and Verbena. For the past year, savory gluten-free tarts are also featured, using a cheesy Parmesan crust dough, for example. 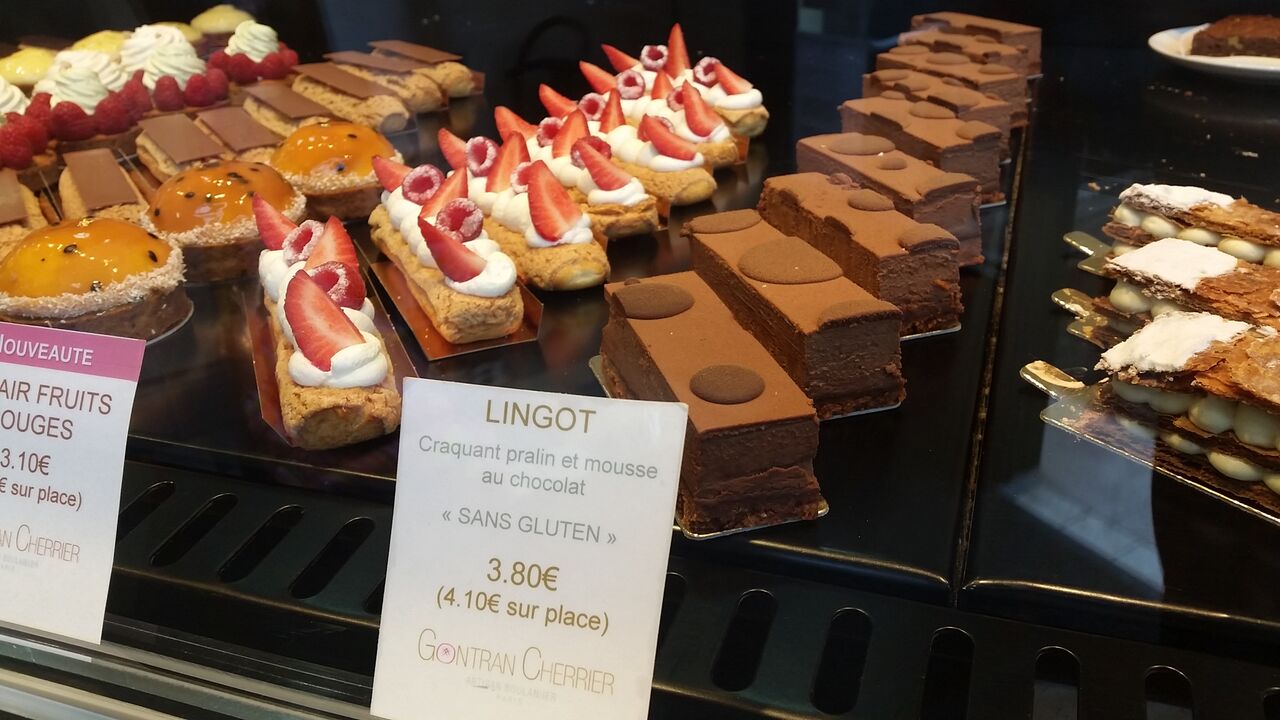 At least one gluten-free pastry is featured in Gontran Cherrier’s boutiques. This Lingot chocolate mousse with crunchy hazelnut praline was particularly popular the last time I popped in – I’m sure customers didn’t even notice its bonus of being gluten-free.

Don’t forget that Parisian macarons are gluten-free. There are plenty of macaron boutiques to choose from in Paris that sell just macarons and chocolate under the one roof – such as Ladurée, Pierre Hermé, Pierre Marcolini, Christophe Roussel, and Jean-Paul Hévin, to name a few. Remember when you’re next looking for gluten-free on the pastry trolley in a few Parisian tearooms, there’s surely a most light but decadent giant macaron too – and, dare I say it, you can always make your own from my books! 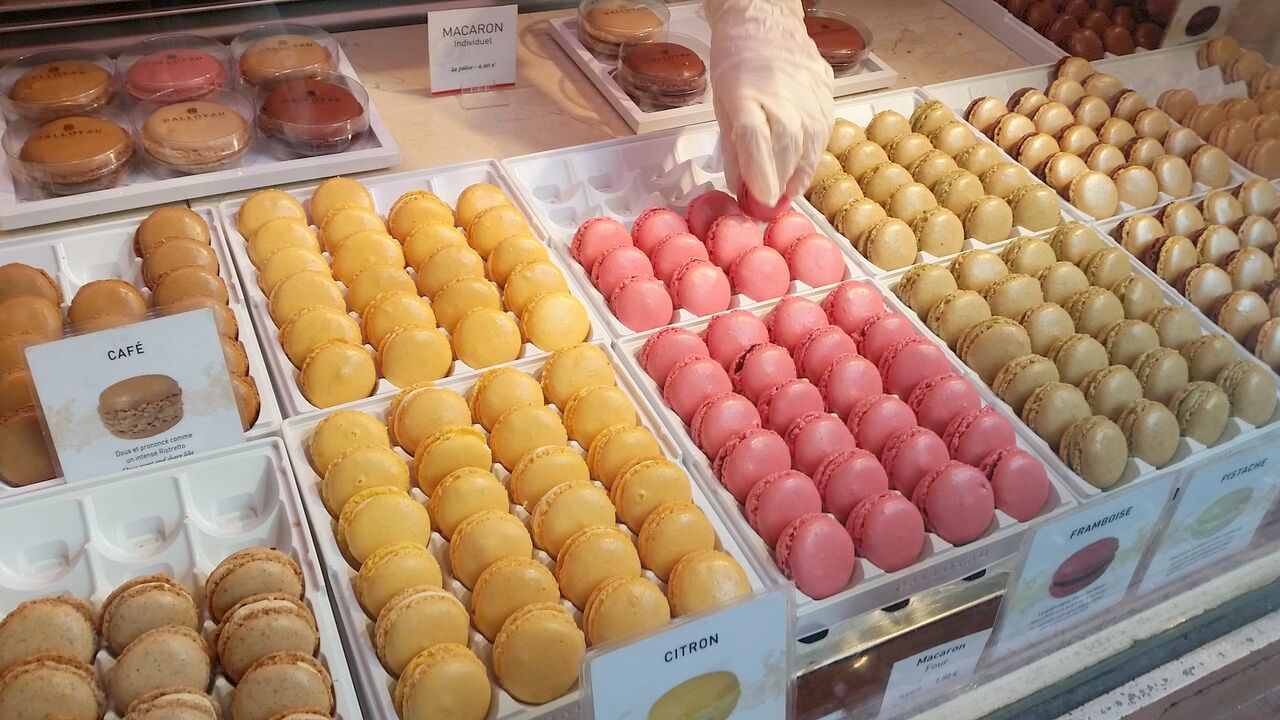 Previous Article Picasso Sculptures: The Latest Exhibit at Musée Picasso Paris
Next Article Sempé, the Celebrated Cartoonist, and His Love for Paris