Paris museums are now offering more than coffee and cake; they’re showcasing a taste of French and international gastronomy, combined with awesome art.

On the roof of the Jean Nouvel-designed museum, with Patrick Blanc’s awesome vertical garden cladding the outside walls, the terrace/lounge restaurant has the best view of the Eiffel Tower in town. The food and world wines by chef Fréderic Claudel reflect the different ethnic cultures showcased in the various exhibitions presented by the Musée de Quai Branly, opened in 2006. Nice touch, one perfect cheese is served, Normandy Camembert, from cheesemaker Marie-Anne Cantin, served whole in its box; what you don’t eat, you take home. And, at street level, under the same management, is the more casual Café Branly, without the fabulous “Eiffel” views of Les Ombres, of course. 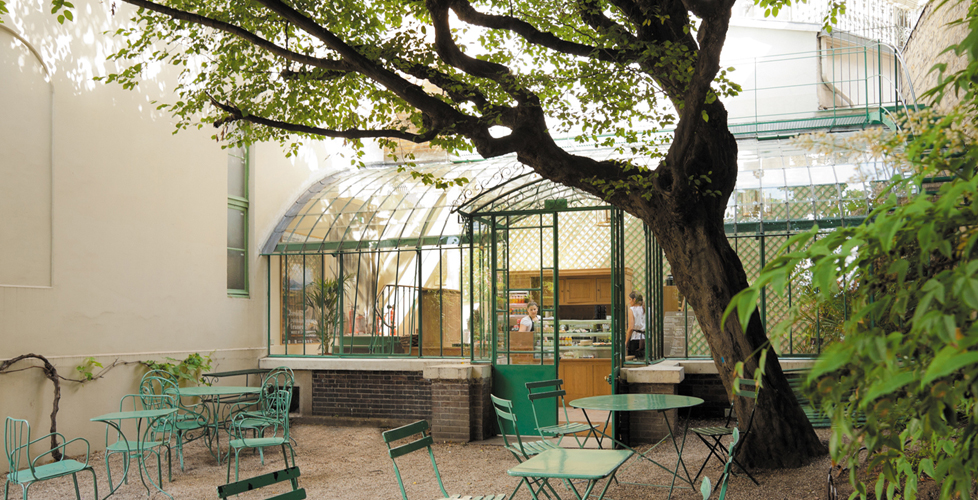 The pretty Pigalle villa and studios of Franco-Dutch artist Ary Scheffer was built in 1830. George Sand and Fréderic Chopin were neighbours and Delacroix, Listz and Rossini were regular visitors! Vie Romantique recreates a harmonious historical setting evoking the 1830’s “romantic era”. The ground floor is dedicated to George Sand as well as portraits, furniture, and jewellery from the 18th and 19th centuries. On the first floor, Scheffer’s paintings are surrounded by contemporary works. Two annual temporary exhibitions are organized as well as concerts, readings and activities for children. The museum’s peaceful courtyard garden serves simple but good soups, toasted sandwiches, quiches and pastry. 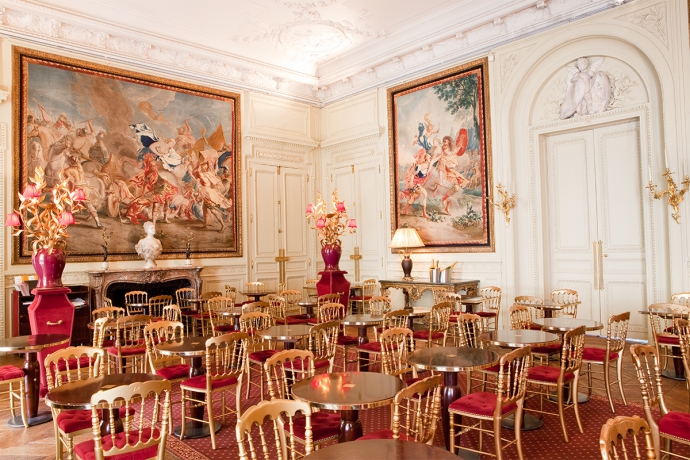 In 1872, banker Edouard André commissioned Nélie Jacquemart, a pretty young artist, to paint his portrait. They fell in love, married, and Nélie came to live in the magnificent 19th century mansion on Boulevard Haussmann where the couple, who lived happily ever after, devoted their lives to travelling the world collecting works of art. Today, run by the Institute of France, the Andrés’ former dining room is an excellent café and, during exhibitions, menus reflect the zeitgeist of the subject. Delicious pastry by Pâtisserie Stohrer and Michel Fenet’s Petite Marquise. This is a secret address, where savvy Parisians pop in for a snack and end up staying the afternoon, because it’s worth it.

Until July 20th, see the exhibition: From Giotto to Caravaggio. 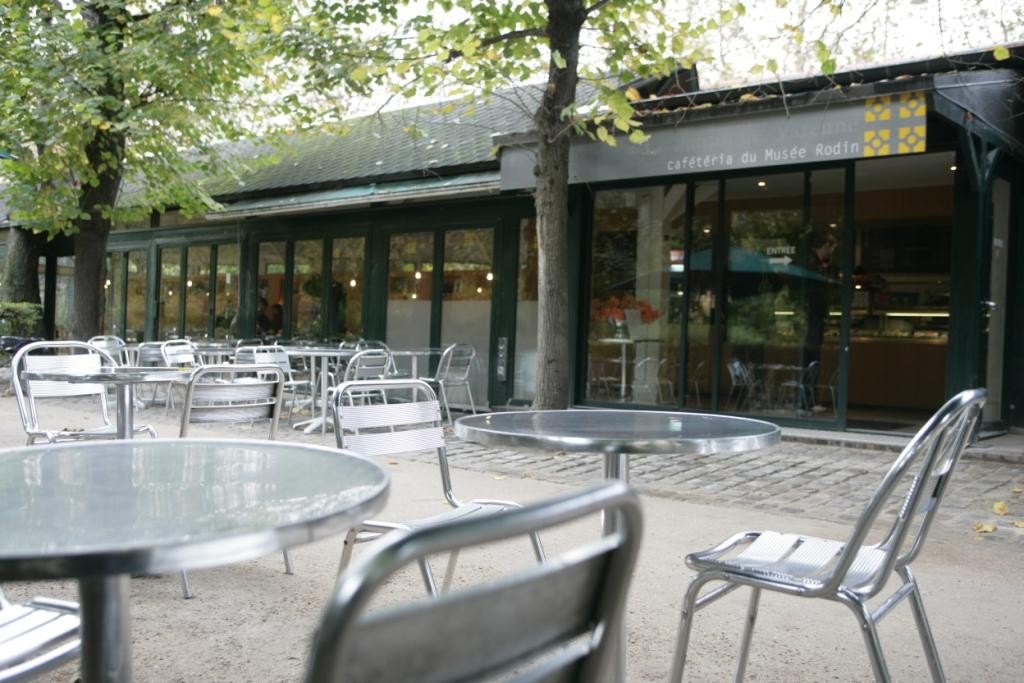 In the middle of acres of lush gardens where Rodin once lived and created, a delightful, discreet, shady café space with terrace. The self-service menu includes healthy salads, quiches, sandwiches. There’s a daily soup and dish of the day as well as excellent desserts and, being France, plenty of wine options, as well as a tea and infusion menu. Exactly what you need to rest feet and mind while visiting this incredible museum. From the gardens, you can spot Les Invalides and La Tour Eiffel. Pure magic! 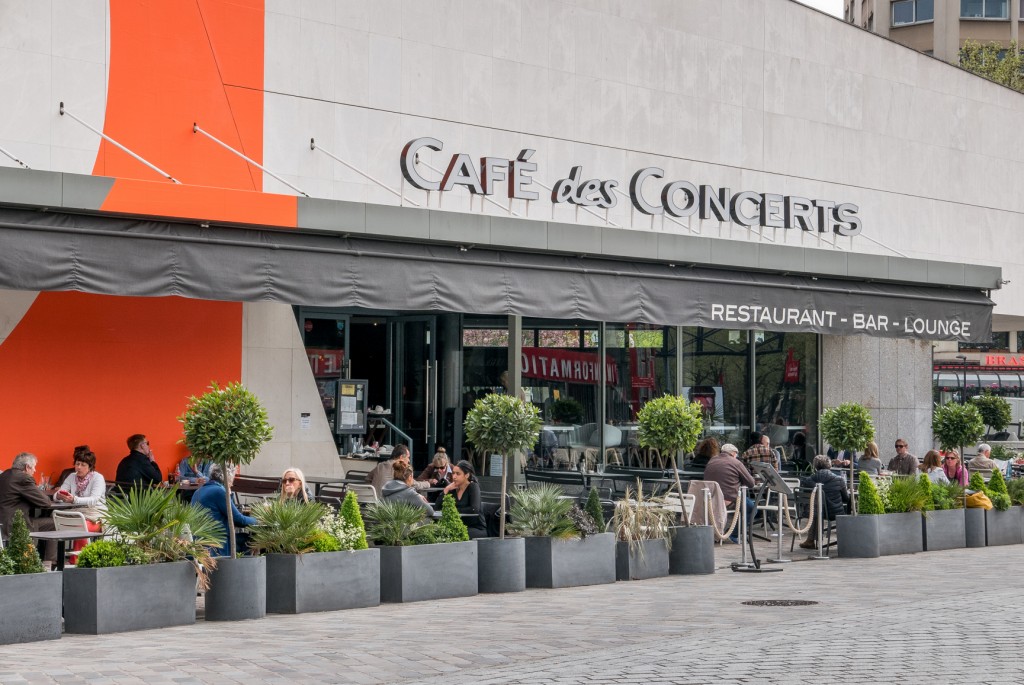 Located in Parc de la Villette, the Jean Nouvel-designed Philharmonie de Paris Concert Hall (2,400seats) opened on January 14th, 2015, with a performance by the Orchestre de Paris of Faure’s Requiem, honouring victims of the Charlie Hebdo shootings which took place in the city a week earlier. President Hollande attended the concert; however, it hasn’t been revealed if he dined on the terrace and tasted the delicious “Grill and Barbecue” dinner menu created by chef Sébastien Prenot. During the day there’s an extensive brasserie menu including Club Sandwiches, Cheese on Toast, Salads, Burgers and fries.

Editor’s Note: Newly opened in Autumn 2015, Le Balcon at the Philharmonie is getting rave reviews.

Housed in the former left-bank Railway Station, which became a museum in 1986, showcasing mainly French art dating from 1848 to 1915. Paintings, sculptures, furniture, photography and the largest collection of impressionist and post-impressionist masterpieces in the world, include: Monet, Degas, Renoir etc. On the first floor just after the Impressionist Gallery, near Manet’s Dejeuner sur l’Herbe, stop for lunch at Café Campana named after the Brazilian brothers who designed the contemporary canteen. The food’s delicious, quiche Lorraine, chicken and mushroom Pie, beef satay noodles and coriander, good wines and Alain Milliat juices. Don’t ignore dessert Café Liégeois or Maxi Eclair. Alternatively, on the ground floor, at the far end of the Nave by François Pompom’s sculpture, the Café de l’Ours (Bear Café) serves snacks, salads and sandwiches, cakes, ice creams and pastries, as well as hot and cold drinks. 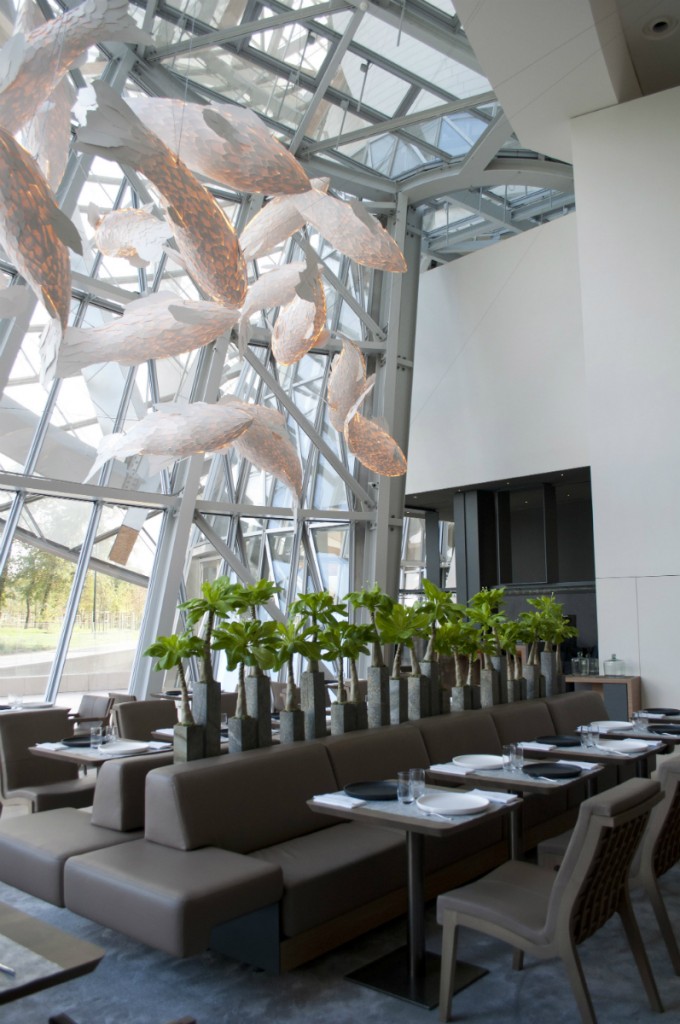 Jean-Louis Nomicos is the chef at the recently launched “billowing sails” museum. An astute choice by LVMH’s chairman Bernard Arnault as Nomicos is not only a talented chef, he also owns Les Tablettes, a contemporary art-themed restaurant in the 16th arrondissement. The restaurant, with terrace, is named in hommage to Frank Gehry, the museum’s architect. On the ground floor the minimal, acquarium-style brasserie has whimsical Gehry fish lamp sculptures hanging from the glass roof. Chef Nomicos proposes different dishes throughout the day and continuous service, with occasional themed dinners, before and after exhibitions and concerts. No telephone reservations, but you can book online!

Located inside the Musée des Art Décoratifs, architect Philippe Boisselier uses amusing play on mirrors and perspectives. The Eiffel Tower is omnipresent, exciting at night when it sparkles, majestic by day. Book on the outside terrace and choose a warm salad of forgotten vegetables: carrot and cumin soup: scrambled eggs with truffles, caviar and rattes potatoes, Bellota ham. Follow with a posh hamburger, a cornet of thick chips, roast chicken and purée or the Dish of the Day. Club sandwiches, pastas and penne then Riz au Lait, Apple crumble, sorbets and ice-cream Coupes such as Cappuccino & Expresso, plus Ladurée pâtissserie. “Le Saut du Loup”, what does it mean? “C’est the frontiere invisible, le fosse protecteur, qui permet la parfait continuité des jardins du Carrousel au restaurant”. It’s the gravel strip just before you get to the Carrousel Gardens. Voila! Eat and learn French at the same time: your two favourite pastimes.

A million and one flavours are served on the 9th floor at the panoramic restaurant on top of IMA. Mezzes, tajines, desserts washed down with excellent Lebanese wines. At Level 0 Café Littéraire hosts conferences every Wednesday. And, eat in or take away from the 9th floor self-service “Les Moucharabié.” 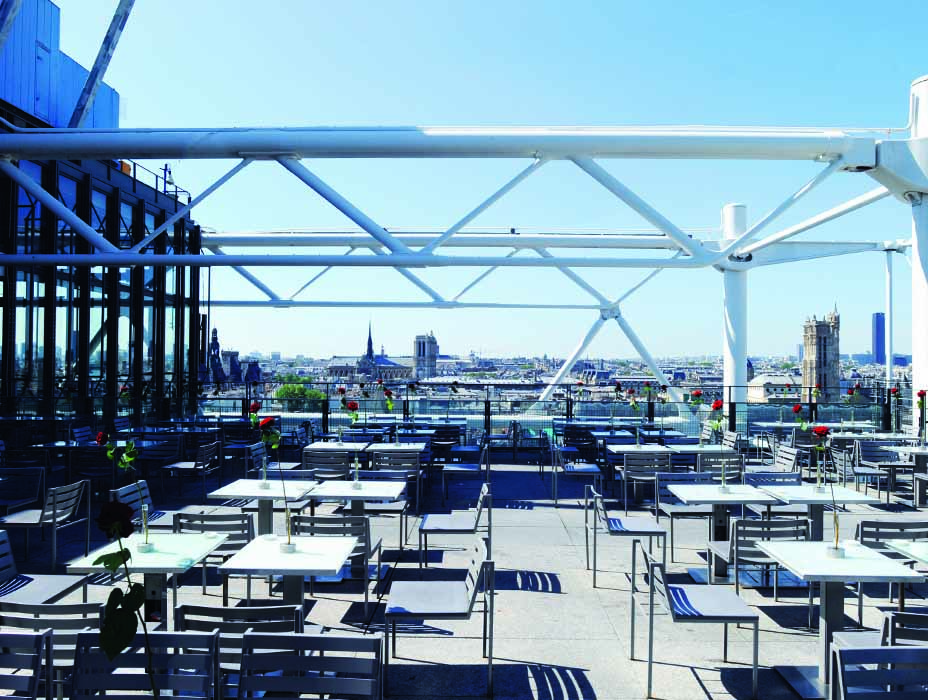 Le Georges at the Centre Pompidou

Accessed by its own lift near the main entrance, the brasserie on the 6th floor was designed by Jakob+ McFarlane in an industrial chic style. From here, Paris is at your feet! Lobster salad, Silver Cod Alan Yau, coriander spiced beef fillet, and Red Fruit Millefeuilles are included in the eclectic menu by chef Claude Demontcuit. Sip cocktails at the bar, or on the vast terrace, book ahead because it’s always crowded and service may be slow, but nobody cares, everyone’s “pipole watching” !