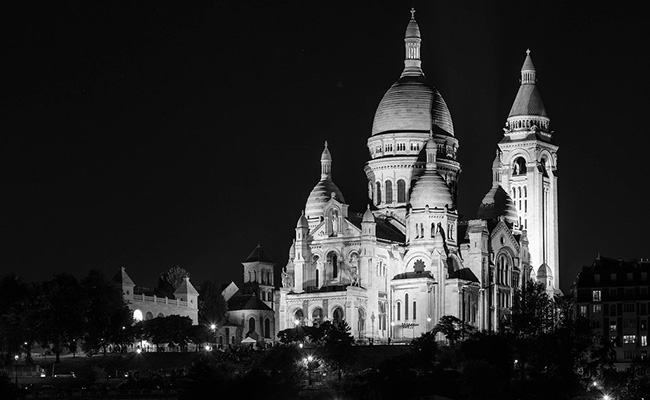 It’s official. Sacré-Cœur is now classified as a historical monument. Reportedly the second visited site in Paris after Notre-Dame cathedral, with 11 million visitors per year, the gleaming white-domed basilica is visible all across Paris from its perch atop the hill of Montmartre. But this new decision — a vote last week by Paris’s City Council — is not without controversy. As explained by The New York Times, “The classification had long been delayed partly because of Sacré-Coeur’s history. The building was erected in the late 19th century at the behest of conservative political forces, on the spot where they had previously crushed in blood the Paris Commune revolution of 1871. Since then, the Basilica’s egg-shaped domes and Romanesque-Byzantine architecture have symbolized to the left the repression of the Commune, a short-lived revolution that shook Paris from March to May 1871 before being suppressed by the French Army. Its building has regularly been the subject of controversies and heated debates…” With the decision, Sacré-Cœur will now be privy to the same subsidies afforded other historical monuments.

Art Basel has arrived in Paris for the first time. Taking place at the Grand Palais Ephémère from October 20-23, the inaugural event will also include open-air sculptures set up in the Jardin des Tuileries and Place Vendome. (This complementary show is called “Sites.”) As reported by The Financial Times, “the rise of Paris as an art market center is crowned this week as the prestigious Art Basel fair opens its first event in France.” Officially called Paris+ par Art Basel, the event “controversially took the calendar slot at the prestigious Grand Palais from Fiac, France’s leading art fair since 1974.”

The strikes and demonstrations continue in France. Over the weekend, tens of thousands marched in Paris to protest high prices, rising living costs, and the climate crisis. This was on the heels of a refinery strike (operated by Total Energies) that’s caused fuel shortages across the Hexagon. The government has ordered fuel depot staff back to work. And then on Tuesday, more massive strikes hit the country, including railway workers, in a real test for President Macron.

France is commemorating the centennial of Marcel Proust’s death (did you see our recent article following in the great author’s footsteps?) and an exhibit has opened at the Bibliothèque nationale de France (BNF- François-Mitterrand) tracing the meticulous process through which Proust produced his enormous novel, À la Recherche du Temps Perdu (In Search of Lost Time). Writing in The Guardian, correspondent Kim Willsher explains that “previous versions of the French novel featured stale bread, toast and biscuit as trigger for author’s childhood memories” instead of the now iconic madeleine. To quote: “In 1907 when he was working on the first volume, Swann’s Way, it was the dunking of pain rassis, a piece of stale bread, into tea that provoked his elation. In the next version, it had become pain grillé, or toast, then some time around 1908 it was a biscotte, a kind of hard biscuit. The rest, of course, is literary history.” Read the full article here.

Ukraine’s Defense Ministry is winning social media. In a recent Twitter video, Ukraine asked France “to prove its love with weapons,” to quote Reuters. “France has delivered Caesar howitzers, portable air defense systems and heavy armored vehicles primarily. However, a wave of attacks on Ukrainian cities has raised the stakes, with Kyiv demanding its partners provide more supplies, including air defense systems…” The 41-second clip is awash in romantic France-inspired images, played against a soundtrack of  “Je t’aime moi non plus” (I love you … me neither), the song by Serge Gainsbourg and Jane Birkin that was once censored. Check it out below.

Craving a cocktail in Paris? We’ve got a handy guide to bars by arrondissement — speakeasies, drinking dens, swanky haunts — which you can access here. In news from the world of trendy libations, the Little Red Door, located at 60 rue Charlot in the third arrondissement, recently won World’s Best Cocktail Menu at the Tales of the Cocktail Foundation’s 2022 Spirited Awards. In the below video by Forbes, Bar Manager Alex Francis explains what distinguishes the bar: a unique menu with ingredients sourced from local farms.