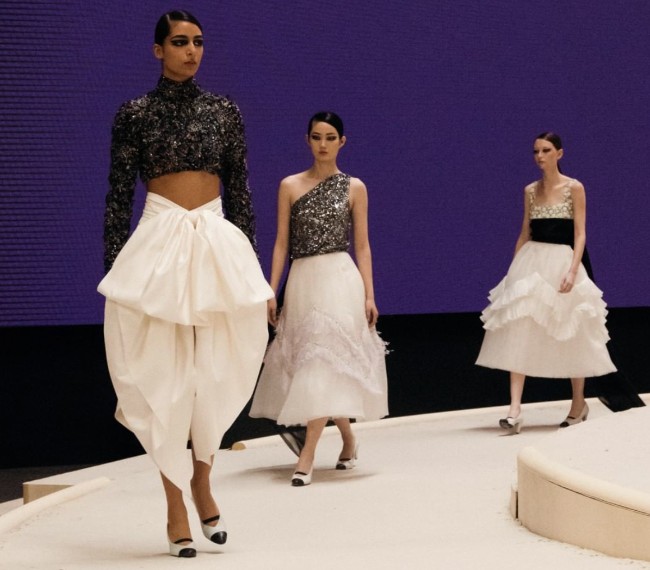 Fashion was alive in Paris last week as the menswear shows concluded and the runways prepared for the stunning Spring/Summer 2022 haute couture looks.

Menswear Fashion Week in Paris enjoyed a mix of playful newness plus sticking with the classics. It was somewhat somber due to recent losses of titans of the fashion world like France’s Thierry Mugler, Vogue’s André Leon Talley, and Off-White founder Virgil Abloh, who passed last fall from a rare cancer.

Haute Couture Week in Paris ran immediately after Menswear — from Monday, January 24, to Thursday, January 27, 2022 — and fashionistas and celebrities flocked to the fantastical scenes on the runways. Here are three of our favorite shows from couture week.

Well, that’s a horse of a different color! Chanel went bold this year, and the famous French fashion house was clearly operating under the maxim of: Go big or go home. The fashion house had a real-life horse trot down the runway. The show opened with Charlotte Casiraghi, Grace Kelly’s accomplished equestrian granddaughter, who also happens to be a Chanel ambassador, riding down the runway on a horse inside the Grand Palais Éphémère.

On social media, Chanel unpacked the show for its followers. Chanel writes, “Charlotte Casiraghi’s arrival on a horseback to the bride and the finale of the Spring-Summer 2022 Haute Couture Show – discover the highlights of Virginie Viard’s collection for CHANEL in a set designed by Xavier Veilhan, as a tale of friendship and creativity dedicated to the magic of the Haute Couture.”

Viard, the creative director of Chanel and a fashion designer herself, wowed audiences with the epic couture looks. Stars like Margot Robbie, Vanessa Paradis, and Pharrell Williams were on-hand to fete the occasion. Anna Wintour was there, too. And, in keeping with tradition, Chanel included a gorgeous bridal look as well. It was a long dress in white satin; the top part of the dress was embellished with feathers, and the over-dress layer was made of tulle and appeared to sparkle.

Pride and Prejudice actress Rosamund Pike arrived at the Dior couture show in a gorgeous, floor-length black ensemble and wore a white button-up and men’s tie on top. This look felt fitting as Dior is known for being a boundary-pushing house.

Dior’s couture show featured a collection from Maria Grazia Chiuri, the Italian fashion designer and creative director of Dior. Chiuri’s looks involved collaborations between the storied French house and international embroidery houses. Looks like embellish chiffon dresses, which were no doubt painstaking to create, stole the show. Along with beaded pieces from ateliers in India, and a twinkling bodysuit.

Model Cara Delevinge was on hand at the show, wearing a patent leather loafer with a low heel, and a large Dior nylon jacket with a glittered design on the back. The Dior beauty fan has ties with the house, so it’s no wonder the model made time for the show. And The Crown’s Claire Foy also made an appearance, wearing shin-high platformed combat boots, a long white coat, and a long black dress, giving Matrix-like vibes.

In the house’s first physical show since the onset of Covid-19, Schiaparelli’s couture stunned audiences with gorgeous, bold looks. Daniel Roseberry has been at the house’s helm since 2019, and the brand has seen its popularity skyrocket during the pandemic, thanks to the clothing’s notable appearances on celebrities, like Lady Gaga at President Biden’s inauguration. Bella Hadid and Cardi B are also fans of the brand.

At the Schiaparelli show during haute couture week, Kanye West and his new girlfriend Julia Fox were in attendance. Elle reports how “Schiaparelli’s spring/summer 2022 show was all about discipline, with sharp silhouettes and a toned-down palette of black, ecru and gold.” Rosebury told Women’s Wear Daily that he’d wanted to surprise people at the couture show, and not deliver the show-stopping, “larger than like” looks that were expected. The Schiaparelli show was all about shapes; models’ dresses were adorned with sci-fi fantasy-like creations and feather-dripping headdresses, all of which appeared otherworldly.