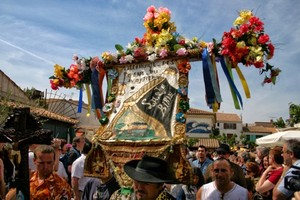 The Camargue region is one of the most unique areas in France, a vast salt delta and marshland nestled in between the two arms of the Rhone River. The Gypsy Festival and pilgrimage to Saintes Maries de la Mer, in the Camargue region of Provence, has been formally taking place since 1448, though the date varies according to one’s historical point of view, with some accounts as early as the 6th century.  According to legend, Sara, queen of the Gypsies, was already in the Camargue region as early as the first century, when a boat full of Marys arrived.  Sara waded into the Mediterranean to help them. Sara, a small black woman, or Sara la Kali, as she is known to the Gypsies, is the one who rests in the crypt of the ancient church by the sea. In the original language of the Gypsies, which was derived from an old Indian language, Kali means Gypsy woman and the black one.  Black Sara is the Patron Saint of the Gypsies. 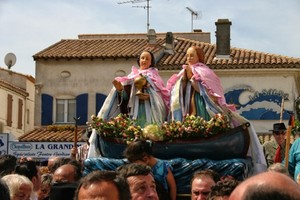 Most of the stories center around three Marys: Mary Jacobe, Mary Salome and Mary Magdalene, though there are usually only 2 Marys depicted standing in a boat without sails.  Mary Jacobe and Mary Salome are considered jesus’s aunts, sisters of his mother, Mary, though many versions exist and are equally fascinating.  One in particular, which persists to this day, is that Sara, known as Sara of Egypt, arrived as a servant with the three Marys on a boat having fled persecution and there is some evidence to support this thesis. Historically, there was worship of the Egyptian sun god, Ra, in the Camargue well before the first century. The side altar on the left in the church is pre-Christian and dates back to the 4th century before Christ.  Relics have been found from this time as well as women’s skulls which originated from the Middle East  As in such cases, mysteries abound.  Was Sara, the queen of the Gypsies, the same Sara who was with Mary at Christs’ tomb the morning of the resurrection? Did Mary come ashore in the Camargue to bring Christs’ child to France? 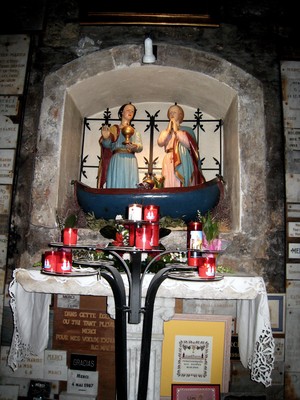 I have arrived three weeks before the pilgrimage and already there are Gypsy women waiting at the entrance to the church begging for money in exchange for a pin depicting Saint Sara.  I walk past them and into the church.  The light inside is dim.  Over the past six years I have attended the festival twice, but have never been able to get inside the church on the night of the 24th because the throngs of chanting, praying people was impenetrable. I was told that seated in the best pews are the cattle ranchers, the manadiersof the Camargue.  Gypsy women and Arlesian women carry bunches of long tapered candles, like flowers, through the aisles and children are carried down to the crypt to kiss the black face of Sara for good luck. Today, there are but a handful of worshippers.  Off to the left is the wooden boat carrying the two Marys that will be used in the ceremony on the 25th. It is surrounded by hundreds of prayer letters from past years asking for miracles. A few pairs of crutches and some canes lean against the wall, testaments to healing powers. Steps lead down into the crypt and I hold my breath as I venture forth into the low ceilinged room. There are no windows and the room is blackened by hundreds of years of candle smoke.  Rows of three foot high burning tapers are the only light.  I breath deeply. The air is warm and smells of wax. To the right of the altar is a painted statue of Sara. She stands about five feet tall and is wearing a blue and gold brocade dress. She has a lovely deep brown complexion and black hair. I buy a candle for 2 euros to leave by the altar, but decide to take it with me instead of lighting it. It is quiet as I leave. 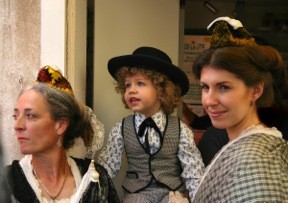 Early on the morning of May 25th, the town of Saintes Maries de la Mer, begins to fill with people.  Musicians play traditional traditional Gypsy music in the many squares. The manadiers, dressed in their traditional outfits, sit astride beautiful white horses.  Arlesian women and children, also dressed in their traditional costumes, mill through the amassing crowds.  By 10:30 the clergy from the church make their appearance holding the boat with the two saints aloft.  A procession of over 3,000 begins forming, headed by the king of the Gypsies and the archbishop, weaving its way through the village streets, singing a repetitive chant until everyone reaches the sea.  Wading into the Mediterranean with the crowd, the priests return the boat to the sacred waters and for one brief moment history is again, repeated.

Afterwards, there are bullfights, singing and dancing in the streets and parties that last for days.  Restaurants in the village open and miraculously, everyone who is hungry, is fed.  This festival and pilgrimage, which has morphed into an oddly unholy celebration is, however, a once in a lifetime event for those seeking a truly unique adventure off the well beaten path.