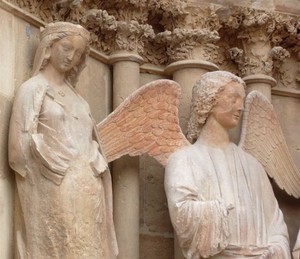 Paris is a multi-layered feast from any of numerous perspectives.  My own preferred ‘lens’ on Paris has always been culinary and cultural. I long have reveled in the markets, focused on all manner of foodie shops, explored the menus of cozy bistros, and thrilled to the wealth of the city’s museums, galleries and extraordinary architecture. And while that has all been enough for several lifetimes, an unusually provocative sermon about the Virgin Mary inspired me to think about the multitude of magnificent gothic and other en-spirited spaces in and around Paris that are so foundational to contemporary Christian beliefs.

So with fresh eyes I have been seeking out places like St. Chapelle, with its ancient and gloriously illumined vitrail telling the story of the entire Bible.  I have re-visited with a renewed sense of wonder the Basilica of St. Denis, St. Etienne du Mont, the church of St. Sulpice with its remarkable Delacroix murals, and of course Notre Dame de Paris. 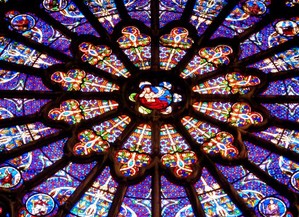 One learns to ‘read’ the stained glass and sculptures in these places, dating to an era when most seekers and believers were not literate.   And these stunning relics of the mind of the Middle Ages engage my modernized soul with that potent medieval spirituality that has helped believers find peace with their Higher Power.

St. Chapelle’s glories are no secret.  Built in the 13th century for King Louis IX, also known as Louis the Pious, this glorious chapel, surrounded today by the Law Courts on the Ile de la Cité, remains an absolute paragon of medieval architecture.  And it contains perhaps the most magnificent stained glass in the world, crowned by a superb rose window detailing the Book of Revelation.  Helpful laminated informational panels are available in St. Chapelle to help decode the order and the rich content of the windows depicting the entirety of the Old and new Testaments.   On a sunlit day the reds and blues of the glass have the luminosity of fine gemstones. Remarkably, the windows were removed and hidden during the French Revolution.   In fact, the nearby Cluny museum has several original small panels from St. Chapelle’s windows in its displays of historic stained glass affording a close-up view of remarkable art.

In addition, the Cluny contains the gorgeously enigmatic “Lady and the Unicorn” tapestries, and a rare Vierge Ouvrant.  The tapestries, thought to date back to the 14th century, tell the tale of a noblewoman who gradually rejects the sensate pleasures of sight, smell, hearing, touch and taste to enter into a life of simplicity and purity. Whatever one’s religious belief or lack thereof, these works are compelling and magically beautiful. 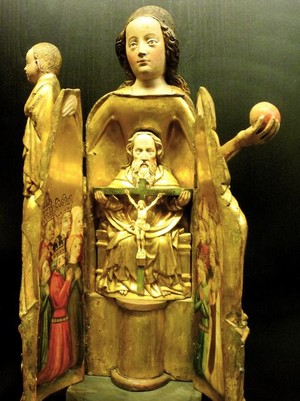 The Cluny’s Vierge Ouvrant, a genre of which less than 50 examples remain in the world, is a gilded statue of the Virgen Mary that is hinged so that it literally opens up to reveal God the Father, Christ the Son, and the dove representing the Holy Spirt, all sheltered inside her cloak! For those who ponder the nature of the Mary figure as an expression of the feminine in the Godhead, this piece, German and dating to 1400, is an extraordinary object.  Such Queen-of-Heaven adoration was also the impetus to the construction of Chartres Cathedral, one of the greatest of all Gothic edifices.

Indeed it is easy to visit St. Chapelle, Notre Dame and the Musee de Cluny in one easy day, as they are all within a few minutes’ walk of each other.  Plus, St. Etienne du Mont sits a bit further up the hill in the Latin Quarter, adjacent to the Pantheon, allowing for a fourth venue in an “Eyes-of-Faith” day.  The Renaissance-era lightness of the intricately carved stone interior of St. Etienne du Mont never fails to refresh me.

St. Sulpice, a later-era church built in the Baroque style between 1646 and 1745, sits on a lovely square in the heart of St. Germain des Prés.  Its impressive twin spires can be seen from the Luxembourg Gardens situated just a few blocks away. St. Sulpice is notable for its ‘Grand Orgue’ and for its history of famous musicians and composers who have directed its music, as well as for the Meridian Line that passes through the church (thought to orient monks toward the Holy Grail).  But all of that aside, I rank this church as a must-see because of the remarkable Delacroix murals in a side chapel near the massive front doors.

Delacroix, among others, was instrumental in restoring the interior of the church following the French Revolution during which the church was used as a ‘Temple of Reason’. The mural of Jacob Wrestling With the Angel was indeed Delacroix’ final masterwork.  The painting is compelling.  Jacob, with muscles straining, is wrestling with a mysterious figure who appears to be engaged in an effortless dance instead of hand-to-hand combat.  The painting freezes the moment when the ‘angel’ is placing his hand on Jacob’s hip to dislocate it, which will forever cause Jacob to walk with a limp.  Jacob’s life-changing experience leads to his receiving a new name, “Israel”, and alters his fear-filled attitude towards his long-estranged brother Esau. Delacroix captures the archetype of the spiritual hinge-point brilliantly.

Slightly out of Paris’ center, the important and lesser-known Basilica of St. Denis is regarded as the ‘birthplace of French Gothic’. So very worth the metro ride, this normally un-crowded Basilica is notable for its ancient and luminous blue and green vitrail, as well as for its brilliantly rendered windows telling foundational stories of the Bible.  It is furthermore a wondrous example of early Gothic architecture, not to mention possessing of the historic crypt where the Kings and Queens of France are buried (accessible by paid entry).   When exploring the crypt, one can see remnants of an even earlier Carolingian church.   The community of St. Denis itself is delightfully multi-cultural. The large square in front of the Cathedral has numerous cafes and bistros, and restaurants serving couscous and tagines can be found within a few blocks. There is also a well-equipped tourist office on the square.

Finally, an “eyes-of-faith” traveler should not miss La Cité de l’Architecture et du Patrimoine, a museum perched on the Trocadero from which exquisite views can be had of the Eiffel Tower.  The exhibitions of French sacred architectural treasures in the form of perfectly reproduced plaster maquettes from the atelier of the 19th-century French architect and preservationist, Violet le Duc, are not to be missed, and afford a “quick” tour of further-flung sites and pieces of note. 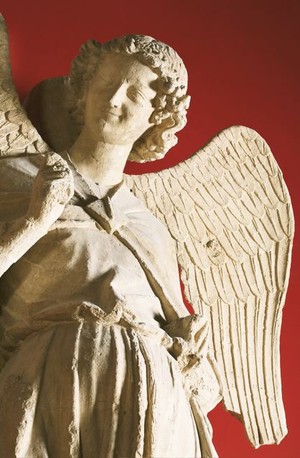 Le Duc had become convinced that efforts had to be undertaken to document and preserve his nation’s civil and religious architectural patrimony.   As a result, he oversaw the production of more than one hundred finely detailed casts of the most noteworthy sculptural and architectural treasures.  One notable fruit of that prescient effort has been the restoration of the renowned Smiling Angel of Reims, the beloved symbol of the magnificent Notre Dame Cathedral in that city.  Notre Dame in Reims is not only a gorgeous Gothic Cathedral, but for centuries it was the site of the crowning of the Kings of France.  Virtually destroyed during World War I, this imposing edifice was restored and rebuilt with substantial international assistance.  And thanks to the detail of Le Duc’s casts, the Smiling Angel sits again in all her glory just above the massive front doors,  restored perfectly.

Sally Peabody is a Paris Specialist, advising savvy travelers on how to experience what they most love during their sojourns in Paris, whether on their own or in the company of expert guides.  She and her husband, the Rev. Dr. Rand Peabody, offer a “FRANCE THROUGH EYES OF FAITH” tour each March.  She also leads intimately scaled culinary tours in Paris, in the Pays Basque, and also in Istanbul, her other favorite city in the world.      Visit http://www.yourgreatdaysinparis.com for details.