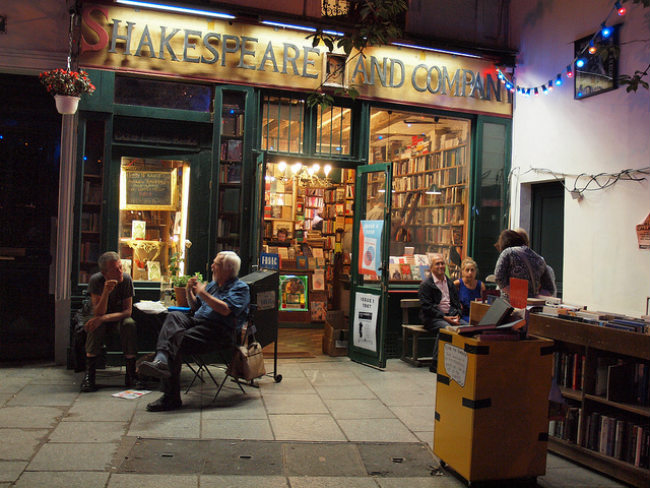 Shakespeare and Company by Zoetnet/Flickr.

Just about everybody has a story to tell. Whether it came in a dream, through life experience, or personal passion, these tales are constant companions until some day, some of us decide it is time to write them down for posterity.

After years of research and study, I have finally come to the point where I need to tell my tale. As a copywriter and a journalist, I know that I am a good writer, but being a writer is not the same thing as being a good story teller and writing a book is a well honed craft that must be learned and then practiced. 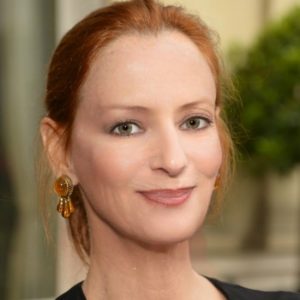 Suddenly I was in need of a writer’s workshop and since I am not the first person to ever consider writing a book in Paris, I found myself with a lot of options. Donning my journalist’s cap, I started searching for the best in Paris, asking everyone I knew in the literary world for their opinion. Italian author and book critic Livia Manera Sambuy recommended I look into the Paris Writer’s Retreat, run by New York Times best-selling author and literary agent, Wendy Goldman Rohm. Three more recommendations confirmed this was a course I needed to follow, then I received her newsletter advising me that there was a last minute opening in the May workshop.

I showed up on Monday morning, feeling very much like I had when I was online dating. Would the workshop be everything it had promised? Was my writing good enough? What would the others think of me? Wendy begins the workshop creating a safe place, as participants introduce themselves, their work and their goals. By the end of the first morning, it was pretty clear that what she had warned was true, many of us were going to be making lasting friendships and important connections in the days to come. 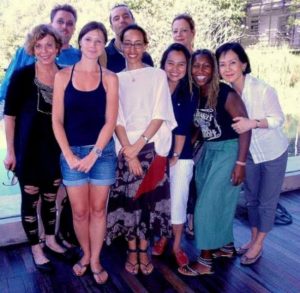 And who were our future friends? South Africans, Americans and a Canadian participated. Some lived in Paris, others had taken trans-continental flights. Some arrived with complete manuscripts, others had been working on a specific project for years. Everyone had a serious professional background and there were no procrastinators. It was a serious group of bright people ready to work.

We worked on setting, style and narration. We followed guided meditations, reading the results for critic at the end of the day. We stretched our minds as our stories took unexpected twists. There was collective joy when someone finally nailed a difficult passage, supportive camaraderie when another struggled. Our projects were diverse: memoir, fantasy, young adult, literary fiction, psychological thriller, romance but we were united in our respect for one another’s dedication. 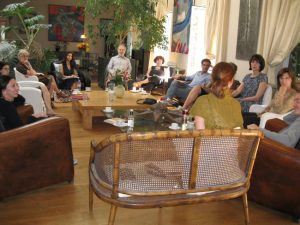 Courtesy of The Paris Writer’s Retreat.

The first few days we’d take a lunch break to share a meal at a local restaurant; recommending the literature that had influenced our work, discussing world events that preoccupied our minds, but by the end of the week, we were all too busy learning and producing, so we agreed on working lunches over sandwiches from a bakery that was just steps away. By evening we were intellectually spent and ready to enjoy a relaxing wine together. Sometimes that would mean some rosé by the Seine. One night we splurged on cocktails in the inn where Oscar Wilde had died then dined with a setting sun in the nostalgic Place Dauphine. Another night Wendy threw a soirée inviting Parisian authors and intellectuals. A pop star showed up with his guitar, women danced, others sang. Conversations about photography, Arabic gardens, healing stones, and cinema careened around the room and out the French windows, spilling into the night sky.

I suppose there are more serious places for a Writer’s Retreat, but the beauty of Paris inspires, and there is something potent about settling into a corner at the Café de Flore, knowing that Sartre, de Beauvoir, Hemingway and Fitzgerald had been there and done just that. 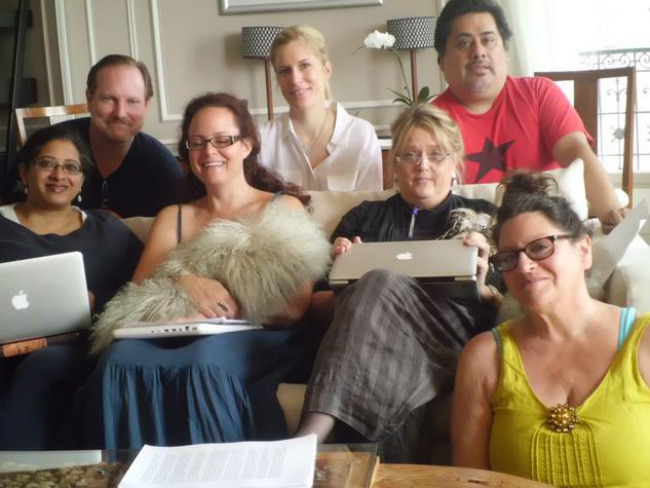 Courtesy of The Paris Writer’s Retreat.

As for the lasting friendships and important contacts Wendy had threatened, I now have an active writer’s group for support throughout the year and a literary agent ready to work with me once my manuscript is done.

The Paris Writer’s Retreat is held in central Paris every May and September. There are still spots available for the September 5th event. Check the website.

Image Credits: Shakespeare and Company by Zoetnet/Flickr, all other images courtesy of Paris Writer’s Retreat