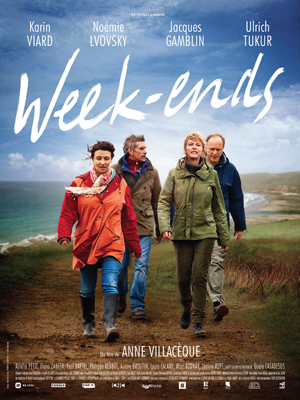 Week Ends, directed by Anne Villacèque, serves up not just a slice of French life, but several of them, during one married couple’s trials and tribulations and another’s bemused continuity. Both couples own weekend houses on the Normandy coast, a popular destination for Parisians to get away from it all for a few days. They see each other regularly, become friends, and their children become bosom companions. Their daughters are both named Charlotte and were born within days of one another. This implies that the two families are opposite numbers on parallel tracks. For reasons that are never made clear, but that we can guess, one of the couples gets derailed.

Christine’s husband decides to end their marriage, and then gets together with a woman named Pascale. Pascale isn’t all that different from Christine physically, with her strawberry blonde hair and pale skin. But she’s more willowy and intellectual, perhaps more suitable to the musician Jean (Jacques Gamblin). Both women are sensual in their own way, but Christine is earthier (and supremely played by Karine Viard, an actress who excels at earthy).

But there’s a clue to a different perspective on the situation. Early in the film Christine gets into a ridiculous but nasty dispute with another woman over a parking place at a supermarket. They continue to argue in the store, until Christine winds up screaming abuse at the woman. Later on, discussing the incident, her friend Sylvette (Noémie Lvovsky) suggests the woman might have been having difficulties. Christine stares blankly as she considers the possibility. It’s chilling to consider how solipsistic we can all be. (As for the other woman, she comes back later on in a funny, ironic sequence, underlining that we’re all guilty of being solipsists.) 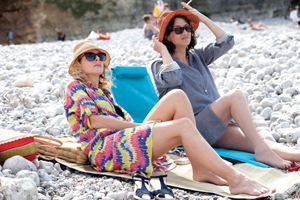 Maybe Christine was just as inattentive to her husband, taking him for granted? Be that as it may, Villacèque is scathing about Jean’s insensitivity to the consequences of his actions. Despite making a new life for himself, he can’t resist the old middle-class lifestyle, the weekends in Normandy—with his new girlfriend. Hilariously (sort of) he proves just as insensitive to Pascale, thinking nothing of foisting his seething daughter on her. As Christine and Jean continue to come to the house (alternating weekends), they spiral unhappily, especially Christine.

Sylvette and her husband Ulrich (Ulrich Tukur) seem to be a much happier, even ideal couple. But they seem rather fuddy-duddy. The director’s take may be that couples are most likely to succeed when they submerge their egos, even to the point of dullness. The lively Christine and self-absorbed Jean insist on being themselves, but pay a heavy price. Ulrich also happens to be German. Maybe there’s an idea that a bi-cultural couple is stronger by virtue of its differences, like a metal alloy. But there’s no exploration of the intercultural dimension, and Ulrich doesn’t even come across as all that German. 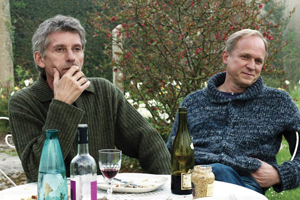 Whatever the character type, this intimiste tragi-comedy is convincingly acted by the principals. Credit must be given to Ms. Villacèque, but the actors are among France’s finest. Karine Viard is always excellent playing women who are strong and exuberant, yet nonplussed by life’s vicissitudes. She livens up what might have been depressing material. Jacques Gamblin incarnates the artsy Parisian narcissist to perfection. Noémie Lvovsky gives weighty but soft gravitas to her role, while Ulrich Tukur brings unpretentious, good-natured charm (if only he’d change his tee-shirt).

The idea of Week Ends is clever—following the two couples over a series of weekends. But it’s theatrical, like Same Time Next Year (the play about an adulterous couple who meet in a hotel room once yearly). The dialogue is often too pat, theatre talk. As good as the actors are, they sometimes sound as if they’re on stage rather than in real life. And the story is ultimately tied up in a neat, contrived way that makes us think of a Broadway play. The director compensates by making the couples as dowdy-looking as she can. Even Jean’s perpetual three-day growth of beard seems more slobbo than bobo. This effort at Kmart realism isn’t very plausible—families who can afford weekend homes near the spectacular Etretat cliffs are generally upscale. 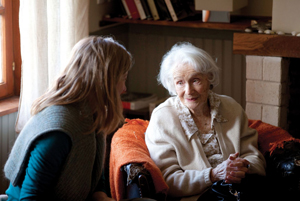 At least Ms. Villacèque knows how to shoot her Norman locales in an evocative way. The waves breaking on the beach have an emotional charge, the lowing cows grazing by the sea are eerie, the changes of weather have an archetypal feel. She isn’t a masterly director yet (this is only her third feature), but she’s the real deal. The emotional minuet portrayed in Week Ends is a bit like Eric Rohmer, but a mangy, petit bourgeois Rohmer, less stylized and elegant. But mangy Rohmer ain’t bad.