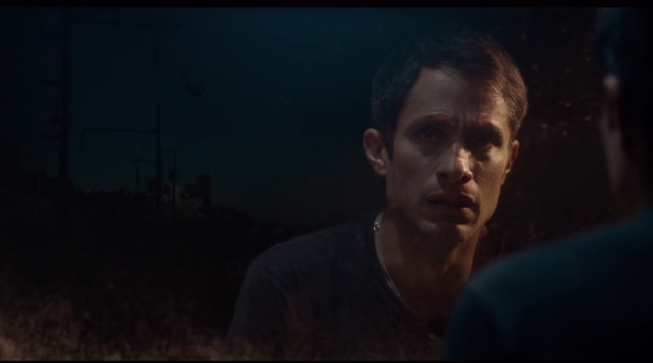 Perhaps the most telling quality of Joan Chemla’s Si Tu Voyais Son Coeur (literally If You Saw His Heart) is that it leaves you a little off balance from the get-go: Is this a French or Spanish movie? And does it make any difference? In fact the film is about gypsies who straddle the border between Spain and the south of France. The dialogue moves from Spanish to Romany to French, and shows how for certain people borders are invisible, if not meaningless.

This criss-crossing of borders extends to the filmmakers and cast, with its French director, Mexican star and Argentine co-star. In addition, Chemla’s screenplay (co-written with Argentine-born Santiago Amigorena) is based on a work by a Cuban writer, Guillermo Rosales.

Daniel (Gael Garcia Bernal), the film’s protagonist, is caught in a limbo of his own making. He and his friend Costel (Nahuel Pérez Biscayart) are small-time crooks specializing in clever scams. One of them poses as an electric company repairman to gain entrance to a person’s house. The other poses as a police detective and “arrests” his accomplice, then interviews the victim to find out if any money was stolen (a way to find said money’s secret hiding place). A more ambitious scam is to occupy a luxury vacation home, pose as the owners, and sell all the furniture and décor to unsuspecting customers.

Yet another, more banal, proves deadly: stealing the insulation from power cables. It results in Costel being killed in an accident. Thereafter Daniel finds it impossible to stay in the area with his family and clan—however, Costel’s brother Lucho (Mariano Santiago) enjoins him from straying too far, and forces him to pay, and keep paying, compensation to Costel’s family.

We follow Daniel in a series of picaresque adventures in the lower depths of the south, as he remains haunted by his past. He winds up in a hotel called the Metropole, run by a thug (played with malevolent relish by Karim Leklou) and populated by a wide variety of desperate types. Those who are unable to pay must volunteer for shady tasks demanded by Monsieur Ali (Abbes Zahmani), the owner of the hotel.

The film at first seems like a Midi version ofLouis-Ferdinand Céline’s Journey to the End of the Night. As played by Gael Garcia Bernal, Daniel has the somber presence of Céline’s anti-hero Ferdinand, but is more leaden. The other characters, especially the denizens of the hotel, are a gallery of not quite funny grotesques. Monsieur Ali is a Mephistopheles out of a Coen brothers movie, with whom Daniel strikes a grim bargain.

As Daniel faces up to his part of the Faustian deal, the movie leaves the Célinian grotesque realism behind and becomes more surreal, in the Coen brothers-David Lynch manner. The director shoots this in a style which is elegant, austere even, like a Spanish painting—a Goya nightmare. (One feels Goya might have painted a nifty series of Capricios in the Hotel Metropole)

Redemption—or possible redemption—comes in the form of a woman. Francine is a pretty but slatternly woman who becomes the Metropole’s newest resident. Sultry, pugnacious, downbeat, in some ways like Daniel himself. Marine Vacth brings the role a sad-eyed charisma that matches Bernal, though she hasn’t been given loads of dialogue. We now enter Dostoyevsky territory, only not quite. Francine looks like the proverbial prostitute with the heart of gold, but she’s actually a mental patient the government is shunting out of sight. The irony is that to fight for the object of his redemption Daniel must again confront that Faustian bargain. Like the Hotel California, it seems that Daniel’s universe is a place where you can check out, but never leave.

The director gives us a lugubrious vision, but it’s entrancing in its way. This vision has its roots in the work of Guillermo Rosales, a schizophrenic who bounced around institutions before committing suicide in Miami in 1993. But we also recognize ourselves—at least a part of ourselves—struggling in our own private Hotel Metropole. It’s not a comfortable feeling. On the whole I’d rather be in the Hotel California.

Previous Article Paris Moments: Photo of the Month, Notre-Dame in the Snow
Next Article Diamonds of Light: A Limited Edition Souvenir of the Eiffel Tower