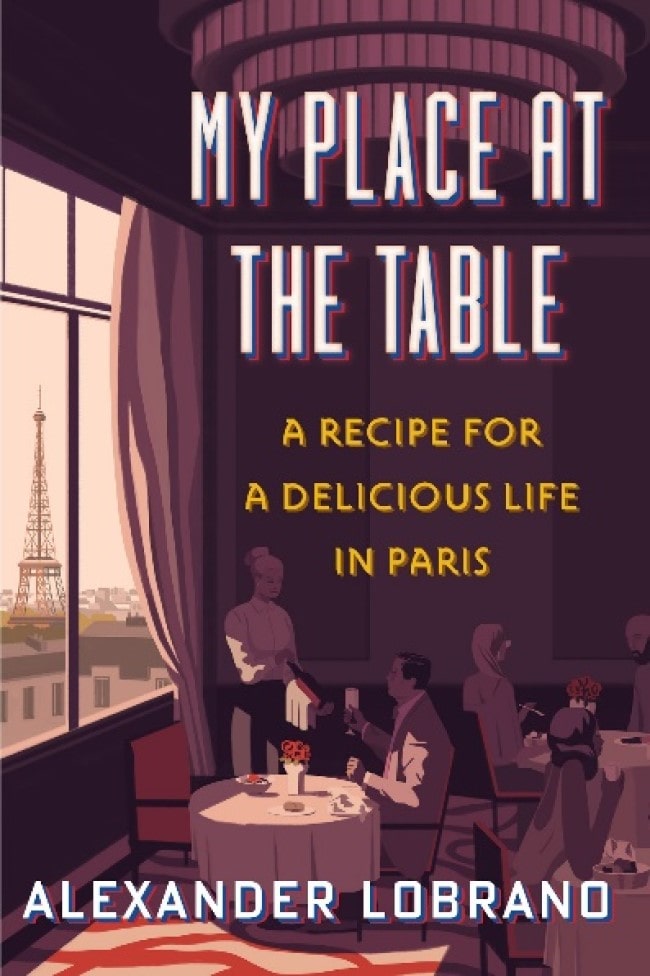 There’s a moment in My Place at the Table when Alexander Lobrano describes peeling onions with chef Iñaki Aizpitarte. At the time Lobrano was the Paris editor for Gourmet magazine, covering the new generation of young chefs who were reinventing the French kitchen. He had tried a funky new place in Montmartre then went back the next day to meet the chef who created such interesting, cosmopolitan flavors in the kitchen. Later Aizpitarte would go on to become one of the city’s most famous chefs at Le Chateaubriand in the 11th arrondissement. But at the time, he was creating a “cuisine de vagabond” at La Famille, and Lobrano sat down with him on the kitchen steps and asked for a second paring knife so he could help out with the onions.

This anecdote is as revealing about Lobrano as it is about the chef he interviewed. Here is a writer who approaches his work with a deep humility and warmth, discerning the human story behind culinary trends and restaurant revolutions. In fact, each of his restaurant reviews (and you can find many of them on our sister site, France Today) reads like a short story.

Francophiles and foodies have followed Lobrano’s culinary coverage years, his restaurant recommendations about the Paris food scene becoming gospel. He’s won multiple James Beard awards for his work and continues to write prolifically for English-language magazines and newspapers. But how did a shy boy from Connecticut who grew up eating Chef Boyardee spaghetti and Kentucky Fried Chicken find his way to Paris?

My Place at the Table: A Recipe for a Delicious Life in Paris, published in June of this year by Houghton Mifflin Harcourt, traces the trajectory of a captivating career, while also sharing a tender coming-of-age tale. Starting with the second-grade essay extolling the virtues of a BLT sandwich, this debut memoir charts the evolution of Lobrano’s palate as he becomes French, exploring the brasseries, bistros, markets and Michelin-starred establishments of Paris. There are some celebrities thrown in (a meal with Giorgio Armani inspires a humanistic article about the man vs. the designer), but it’s the lessons learned along the way that really jive with readers.

For example, when Lobrano penned a damning review of La Coupole, after the iconic brasserie had been acquired and commercialized by the Brasserie Group Flo, a subsequent meal with the owner is eye-opening: “You must always remember your words can do a lot of harm— to waiters, to kitchen workers, to cooks, to everyone who works in a restaurant that you criticize publicly. So be careful— be sure of your judgements because you could get into trouble,” Jean-Paul Bucher said to him.

It’s also fascinating to see how Lobrano ends up at the epicenter of the dining revolution, discovering restaurants like La Régalade, the small restaurant at the edge of the 14th arrondissement that launched the bistronomy movement. In his story for Travel + Leisure, Lobrano announced that “La Régalade was the most important new opening in Paris in a long time because its young chef, Yves Camdeborde, had invented a new type of restaurant, the modern bistro, which was serving a style of French cooking that had never existed before.” Camdeborde was “thumbing his nose at many of the established rules of French gastronomy.

Ultimately, My Place at the Table is a warm and delicious immersion in life in Paris. “Everyone who loves French food will want to read this memoir,” said Ruch Reichl. “Alexander Lobrano’s beautiful memoir about finding himself through writing about food is charming, wise, and often very funny,” said Alice Waters. And chef Daniel Rose said, “Lobrano excels in weaving a full and timeless human story with bits of mouthwatering epicureanism. His writing is a meticulous, generous, and joyful affirmation of life.”

An added bonus for foodophiles is the “Little Black Book” found at the end of the memoir, a selection of 30 all-time favorite Paris restaurants that range from special-occasion splurges to neighborhood haunts.

Purchase a copy for yourself at your favorite independent bookstore, like the Red Wheelbarrow or Shakespeare & Company in Paris. The book is also available through online shops like Indiebound and Bookshop.org.

Lead photo credit : The cover image from My Place at the Table by Alexander Lobrano

Previous Article Cinema: France Is Cracking Up In ‘La Fracture’
Next Article Was Émile Zola Murdered? And the Dreyfus Affair that Never Went Away