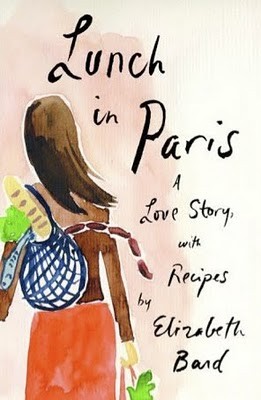 “Red meat and gin,” said Julia Child when asked the secret to her longevity.

The American culinary whiz, credited with mainstreaming French cuisine, died at ninety-one. Following the French Paradox, Child was a longtime smoker and a lover of red meat and heavy French cremes. She defied logic and reason with her longevity and her ability to bring the complexity of French dishes to the Everyman.

Elizabeth Bard’s Lunch in Paris: A Love Story with Recipes, starts off with a bang. Literally. The book’s first sentence reads: “I slept with my French husband halfway through our first date.”

It’s hard not to fall in love with a book that begins with such bluntness and candor.

Gwendal, Bard’s French amour and now-husband, woos her at a restaurant one day. And the rest is history. The two met at a conference in London for Digital Resources in Humanities, “can you think of a less promising place to meet the love of your life?” she wrote, giving me hope for future boring events I’ll be obligated to attend. 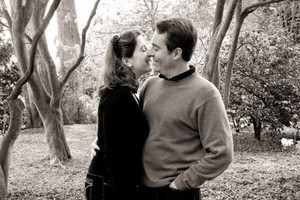 The two quickly begin a Franco-Anglo tryst, traveling back and forth between London and Paris.  “I am leading a double life. By day I read about Victorian insane asylums in the British Library; by night I decipher X-rated e-mails with a French-English dictionary.” Unlike most long distance romances, this one doesn’t fade to black – a feat I’m always impressed by, in life and literature.

Well, if Hanks was in fact a Frenchman, didn’t have a child… and it was a completely different story.  The distance barrier is the same. Instead of the Empire State Building, the inanimate monument to Bard and Gwendal’s love is La Tour Eiffel.

The test of their relationship came one day when a bird overhead at the Bastille market pooped on Gwendal’s arm. He laughed it off, saying “ah, merde,” and Bard knew “right then. A man of grace and humor. A keeper.” Sometimes, that’s all it takes.

There were vexatious elements of the writing: “Jewish. But not too Jewish” or “we could do all the things you can’t do when the boys are around…totally pig out.” But I suppose judging a book on a few ethnocentric or sexist sentences is like judging an entire movie based on the miscasting of Russell Crowe as a musical lead.

The book presents a unique take on the AIP Formula – that’s American in Paris. Of course, the standard cliches are there too: overcoming language barriers, experiencing new foods, committing social faux pas and finding the perfect boulangerie.

Diverting from the AIP Formula, there’s colon cancer. There’s tap dancing at their wedding – by the groom. There’s invocations of Martin Scorsese on a visit to Manhattan. There’s a realness and a sweetness from the author, that jumps from the pages, giving her a pass for exploiting trite topics like French pessimism.

I flew through the book. The only impeder was the French recipes, which peppered the book.  Yes, the book has the word “lunch” in the title, and food is as main a character as the protagonist.  Yet the recipes slowed down the story and felt clunky.

But that’s just one reader’s opinion.

All in all, like any Parisian lunch, the book was a delight to devour: so good it made you laugh, smile and swell with emotion. It held insight, joie de vivre and resourcefulness.

And like a Parisian lunch, it flew by too quickly.

Leaving you satisfied, yet unfulfilled – which is a good thing. Because it makes you jump out of bed, knowing there’s another lunch to be had, another book to read, or another person to meet.

An Interview with Kristin Espinasse, Creator of “French Word a Day”