Home Art 59 Rivoli in Paris: An Art Gallery Like No Other

So, you have done the Louvre, the Musée d’Orsay, L’Orangerie, Musée Marmottan Monet and nearly all the other famous art galleries and museums in Paris, and are satiated with classical, neoclassical and Impressionist art. The Picasso museum has stunned with its beauty, the Luxembourg museum has charmed with its intimate rooms, and you’ve discovered the Delacroix museum quirkily hidden in its little courtyard. You’ve probably wandered around the Rodin museum gardens, visited the inside-out Beaubourg museum (Centre Pompidou) and loved the Musée de Montmartre and Monet’s studio and gardens. So what now?

59 RIVOLI answers that question perfectly, but only if you are prepared for a totally different experience, for 59 RIVOLI is a gallery like no other, with a history like no other.

The renowned art historian Gombrich famously stated that:
‘There is really no such thing as art. There are only artists.’ And at 59 RIVOLI, the one thing there is absolutely no shortage of is artists.

There is something fantastical, not just about the location of number 59, bang in the middle of the Rue de Rivoli, but how it came about. Most visitors to Paris will have walked the long Rue de Rivoli, gazed into its shops, wandered under its arcades and ended up either at the Tuileries at one end or the Hotel de Ville at the other. After the Champs-Élysées, the Rue de Rivoli is probably the most well known shopping street in Paris. So how did number 59 become a squat? How did three artists manage to break in and occupy the premises? But most astonishingly, how did Bertrand Delanoë, then a candidate for the mayor of Paris, keep his promise to legalize the squat if he was elected?

The unlikely story starts in November 1999, when three artists, Kalex, Gaspard and Bruno broke open the cemented-over door of number 59 Rue de Rivoli. (There was also an inevitably of their initials making them known as the KGB.) The building had been abandoned by the Credit Lyonnais bank 15 years previously and the French state had not intervened in its inevitable decline.

Helped by artist friends, the clear up began. After 15 years of neglect, pigeons and drug addicts had left their mark inside the five story building, but the artists had a vision to turn this space into a creative place for artists to live, work and exhibit.

When their work was completed, the building was opened to the public from 1.30-7.30 pm. Concerts, performances and show openings were organized by the three artists, now calling themselves “Chez Robert, Electron Libre.”

Very easy to imagine however that this illegal squat could be ignored by the authorities, and the French state stepped in and ordered their eviction on February 4th, 2000, a little over a year since the ‘KGB’ first broke down the cement door.

The artists were fortunate in their choice of lawyer, Florence Diffre, who with the help of a sympathetic and fascinated media, got the eviction a six-month delay. It was no doubt the publicity from the media that persuaded the government to simply let the matter slide for a few years, and the forced eviction did not materialize.

While this inactivity from the government was welcomed, number 59’s position still remained precariously uncertain. Then in stepped the mayoral candidate for Paris, Bertrand Delanoë, who not just visited the ‘squat’ or ‘squart’ as it was often called, but loved it and promised that if he became mayor, he would legalize it. And Mayor Delanoë kept his promise!

With the certainty that the squat was no longer an illegal building the artists could be evicted from at any time, number 59 became simply 59 RIVOLI, and an organized, if always unorthodox, art gallery was born.

There are now 30 artists studios in the building. Fifteen of which are permanent and the other 15 occupied on a three- or six-month basis by differing artists on application. (The artists no longer can live in the building.)

As a gallery conceived by free-spirited artists whose aim was to present a cultural alternative of art allowing for a more democratic access to both the artist and the public, it would be fair to say that 59 RIVOLI, is as far from a typical art gallery as is possible. From the outside to the inside, the building is an assault to the senses with more than a nod to psychedelia.

The ground floor gallery hosts artists not included in the 30 work spaces and holds two week cohesive exhibitions, as well as performance art and all genres of music concerts at weekends.

Unlike other galleries, every artist’s studio is open to the public to wander around, peruse their work, and should something catch your eye, it is possible to purchase. The artists welcome questions and most allow photos but it is always politic to ask first. Each artist can decorate their studio as they like. The walls of the circular staircase would not shame a Pink Floyd album cover, and the ‘colorful’ ( a really inappropriate description!) facade is changed every few months.

The success of 59 RIVOLI is nothing short of phenomenon. From a pigeon- and syringe-filled, derelict building to an illegal ‘squart’ the subject of numerous complaints, number 59 now enjoys up to 4,000 visitors a week and is one of the most visited contemporary art galleries in Paris and is known throughout the whole of France. But I may have forgotten to tell you the best part: Entrance is free.

59 RIVOLI may well still look like the ‘elephant in the room’ of the Rue de Rivoli amidst its more conservative, salubrious neighbors, but what a splendidly, vibrant elephant it is.

A living and breathing ever changing gallery celebrating modern art and artists at their most diverse and free. 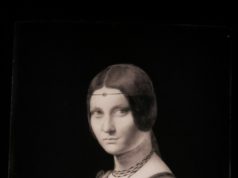