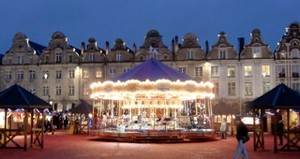 My intent was to visit one of France’s more renown Christmas Markets and ended up discovering a perfect destination spot. I choose Arras because it was getting well into the last minute shopping crunch and I could not imagine being buried in a large town with tons of tourists. Arras is one of the best known markets and it is described as being smaller and more doable for a day’s excursion. Even more enticing is that Arras is only a forty minute direct train ride from the Gare de Nord train station in Paris.

The centre ville of Arras is just a few minutes walk from the train station. Calling a small city adorable may sound corny, but adorable it is and most definitely the charm of Arras was enhanced by the Christmas lights, decorations, music and its lovely marché de Noël.

Arras is the capital of the Pas-de-Calais department in the north of France and it is the heart of the Artois region with strong influences from its neighbor, Belgium. You will be smitten by the architecture which is unique to this area. In the square named the Grand’Place there are 155 building facades in the style of Flemish baroque. These buildings date primarily from the eighteenth century and although some were destroyed during the first World War they have been meticulously reconstructed. The result is a sense of being transported into a magical miniature fantasy land and what an ideal location for the annual marché de Noël. 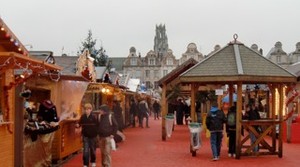 The Christmas Market is host to handmade crafts and regional specialties. It is well organized with red carpet pathways, covered walkways and periodic kiosks providing counters and heaters. Among the stalls you can sip on hot mulled wine, sample the roasting chestnuts and fluffy Flemish waffles while stocking up on gifts. In addition to the festive atmosphere, decorations, wooden carousel, activities for children, music and Santa, there is a large skating ring for all those young at heart. The market opens in the beginning of December with Santa descending a full 75 meters from the top of the Belfry. An exploit to impress just about anyone and a grand way to kick off the holiday season. 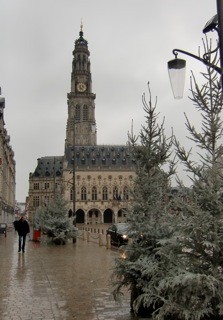 The Tourist Information Office is located on the ground floor of the Town Hall on the Place des Héros and it is a perfect starting point to explore Arras. In the Tourist Office you will find the entrance to make the climb to the Belfry and it is where the tour begins of des Boves. (The Boves are an underground circuit of cellars and passages.)

Construction of the Belfry began in 1463 and was completed in 1554. It had the primary purpose of serving as a watch tower for enemy invasion. The Belfry suffered severe damage during the first World War and underwent complete reconstruction from 1924 to 1932. It has been listed as a Unesco World Heritage Site since 2005 and ascending to the top offers beautiful views of the surrounding countryside.

Beneath the paving stones of Arras are the Boves. These were limestone quarries which were dug in the tenth century and continued to serve as a source of building blocks for Arras and the surrounding area. Place des Héros is directly above a section of the Boves and the underground tunnels provided storage for the market vendors. The quarries became very instrumental in World War One and exactly 95 years ago the British soldiers used this network of passageways for a surprise attack on the Germans in the Battle of Arras. The tour of des Boves leaves from the Tourist Office and takes about forty minutes. 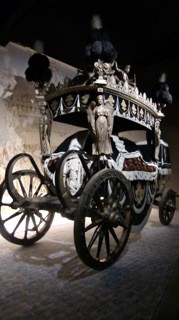 From now until next November, the exhibit Roulez carrosses (Go carriages) will be at the Musée des Beaux-Arts d’Arras and the Saint-Vaast Abbey. The exhibit features a collection of horse-drawn carriages from Versailles. Highlights include those carriages in the marriage procession of Napoleon Bonaparte and Marie-Louise in 1810, the coronation coach of Charles X from 1825 and the very impressive funeral coach of Louis XVIII. Included in the exhibit are a variety of paintings, sculptures and accessories. The museum is open every day except Tuesday from 9:30 am to noon and from 2:00 pm to 5:30 pm. This is an extraordinary exhibit and well worth the trip to Arras.

Within Arras you can explore the cathedral, view Art Deco buildings, visit the gothic Town Hall and Robspierre’s house. For 1000 years markets have been an integral part of life in Arras and they continue to be a colorful event throughout the year. I urge you make this a part of your visit with the town markets being held every Wednesday and Saturday morning. 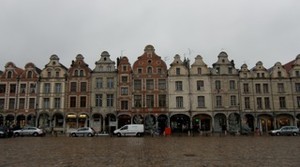 Artisanal specialties include textiles, chocolate, cheese and numerous products of the terroir. Arras hosts a diversity of events and provides a rich cultural heritage. Look for their annual music and theatre festivals, their literary fair and their trotter races held on a magnificent grass race course.

I went in search of a typical French Christmas Market. What I found was not only a picture perfect holiday market but a real destination spot to visit and enjoy all year long.

Loui Franke is the author of Parisian Postcards.