Home Archives Why I Miss Paris

The adage that absence makes the heart grow fonder is absolutely true when it comes to Paris.  How do I love Paris.  Let me count the ways.

First, the quality of daily life

This is not something you can reduce to numerical values or grade like a test or a corporate bond. Attempts in the States to identify the best places to live inevitably give prizes to places with low taxes, bad food, and no culture; Paris would flunk. What I mean by the quality of life are the small things that make simply being alive and going about your business better and more often than not a pleasure.

The pace of life is also part of what I mean. A baguette or a croissant still warm from the oven is an understandably universal delight of living in Paris. The French seem to learn from the time they are old enough to be perched in a high chair that sitting down for a meal is only partly about food. It’s also about taking time to enjoy the food and the wine, to enjoy the company, whether the topic is gossip or something more serious.

Parisians spend a lot of time over food and they take breaking bread with someone seriously. The French compagnon and the English companion derive from eating bread together, the height of human friendship. Parisians like to make the pleasure last as long as possible.

How they find the time for a real lunch and still manage to get some work done is sometimes questioned. Ironically, the French are much more productive than people from most other countries. The stereotype of a French person who needs a day off to recover from a day off is a bad rap. 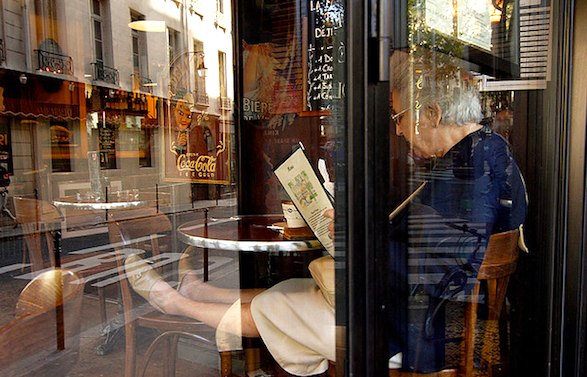 It’s also okay to sit alone over a meal in a café or bistro. People take time with themselves, usually with a book or newspaper, though you will also see people writing and drawing. Though Paris has lost many of its cafés in the last couple of generations, thousands still exist because they improve the quality of life for people living in small apartments, as most Parisians do. Considering apartment prices, a two-bedroom apartment of 60 meters2 borders on the luxurious, though that’s still less than 650 square feet of living space. The café down the street becomes part of an expanded home.

This may be compensation, but how we compensate for the lesser things in our life is part of maintaining its quality. Lingering in a café is not escaping from home, but broadening it, and it’s obvious how many regulars make themselves at home and are made to feel at home by the staff. 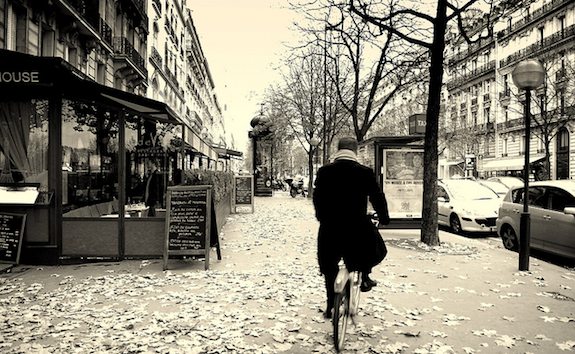 Second, the architecture and the rhythms of the streets

All major cities have monumental buildings that amaze visitors as symbols of the power and glory of the city. Notre Dame, le Grand Palais, Les Invalides, and le Palais Bourbon, among many others, are splendid and do exactly what they were intended to do as they make the French proud of being French and the Parisians proud that the greatest buildings in France are in Paris.

But it’s the ordinary buildings on ordinary streets that keep me thinking about and missing Paris. The height of the buildings helps.  On the edges of the city, there are high-rises, which are awful without exception. But in central Paris, and by that I mean in all twenty arrondissements, the scale of the buildings at eight or nine stories at most is built to a human measure. You don’t feel dwarfed walking down the street nor do you experience the canyon effect of New York and other American cities where the streets get barely any sun and the wind is funneled into gales that can knock you down.

Paris has also not segregated its commerce from its dormitories. Few streets in Paris are endless rows of apartments with no stores or restaurants on the ground floor. Rue Montorgueil may be cheesy because it caters to tourists with cash in their pockets. But look at rue d’Alésia in the Paris 14th, rue de la Folie-Méricourt in the Paris 11th, rue Saint-Dominique in the Paris 7th, or rue Delambre in the Paris 14th with their wall-to-wall, street-level commerce. The businesses depend on local residents who live upstairs.

In the States, this is called “mixed use” and requires some serious urban planning. In Paris, it’s always been organic: the way things were and are and, I hope, will be. It makes life better because the things you want are near where you live. I doubt it’s possible to live in Paris and be more than ten minutes away from a café, a bakery, a pharmacy, a podiatrist (it’s the shoes the women wear), a bus stop, une alimentation, or a Franprix, and other conveniences of life.

The only American equivalent I can think of would be Manhattan, where the density of tall apartment houses is more than enough to support a Korean greengrocer on every block, restaurants, bars, shoe repair shops, drugstores, and on and on. 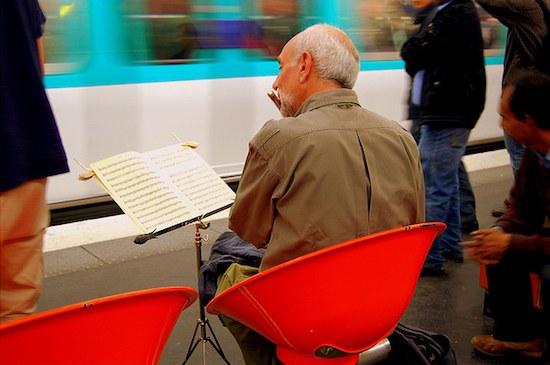 Residents who live and work in central Paris don’t need cars because it’s a walking city. Even better, it’s pleasure to walk in Paris, and the métro and bus systems are very good. Traffic is terrible, so let the bus driver worry about it; parking is worse. You’re not a hostage of the auto industry if you need groceries, flowers or other essentials of living and life. If you crave something unavailable in your neighborhood, for example, food from an ethnic grocery store, it’s only a quick métro ride away. Buying Asian food at specialty shops or restaurants can be done well and inexpensively in Chinatown in the Paris 13th, in the small China blocks in the Paris 4th and 2nd or in Belleville across town on the edge of the Paris 20th, and you can be there in twenty minutes or so. Ditto for Indian food, clothes and more. Paris’s multiethnic mix is another reason for it’s an extraordinarily vibrant city. 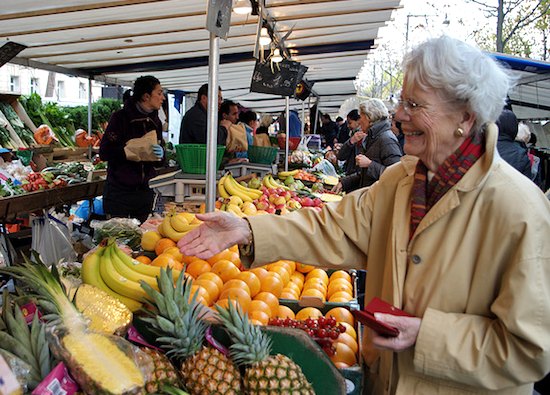 Fourth, stocking the kitchen and the closet

Walking down the street and seeing neighborhood boutiques is a pleasure. Stores are convenient and window-shopping is free. If you’re a regular in a clothing store, which you can soon be, the sales people may very possibly have suggestions about what you’d like. Sure, some are changing hands and even going out of business in the name of progress and consolidation, which is a shame. But the future looks secure for boutiques and favored vendors at open-air markets who sell everything from vegetables, fish, eggs, and cheese to hats, tablecloths, and lamps because so many Parisians insist on shopping there. The French (especially those of a certain age) steer away from fast food and actually care what they consume. They have the idea that a tomato should taste like a tomato and not cotton. In a city where eating is part of the art of living, people are willing to pay extra for produce and meats that were raised on nearby farms rather than shipped by the container-load from the lowest-wage country of the moment. 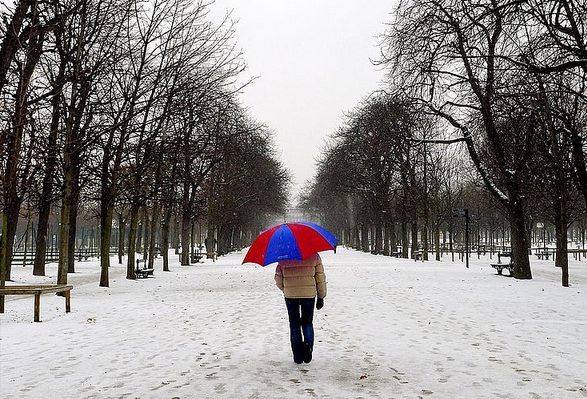 Paris has 118 hectares of parks and gardens used by everyone, no matter their age or socioeconomic status. Talk about the best of both worlds and certainly in my world: it’s such a gift to live a block away from the Luxembourg Garden where gardeners give their all to maximize the jardin’s beauty. My weeding is now confined to the flowerpots on my balcony for two that overlooks the rooftops of Paris.

They say for every wise saying there is a counter-expression.  Thus, for “absence makes the heart grow fonder” there is “out of sight, out of mind.” What they say doesn’t cut it with me. My heart just grows fonder; and when Paris is out of my sight, it’s always on my mind.

Karen Fawcett is the publisher of BonjourParis in year 20-something of her love affair with France. If there’s another online publisher who has devoted decades to sharing information about France, we’ve yet to find them. BonjourParis readers have faithfully subscribed to read her musings about an expat’s life in France and travels on the road. To read any of her hundreds of columns, just click on her name.

Go back to Paris….click on image for details about these books & “Midnight in Paris.”