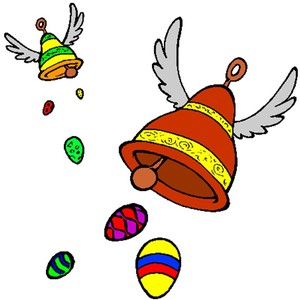 The history of Pâques

This year Easter Monday, a federal holiday in France, falls on April 1st.  On Easter Sunday morning most children won’t be waking up early to catch a glimpse of the Easter Bunny. Their eyes will be glued to the skies. Except in Alsace, on the German border, where the Germanic tradition holds firm and it is a hare, not a rabbit who hides the eggs, in the rest of France little ones will be awaiting the arrival of the Bells.

The French call Easter Pâques.  The French word comes from the Hebrew word hag ha– pessah or pèseh. In Greek the Hebrew word was translated pascha. In French the Jewish celebration of Passover is written in the singular “Pâque”, the Christian holiday is written in the plural form “Pâques” and, of course, both take place on different days. If, in a second time, the Pâque holiday was to become synonymous with the freeing of the Jewish people and the crossing over of the Red Sea, in the older Jewish nomadic tradition, pâque also meant the lamb that was sacrificed in spring. The French have maintained the tradition to this day. A gigot of roasted lamb with flageolets is typically present at tables all over France on Easter Sunday.

As for the bells, the first bell arrived in France from China all the way back to the time of the Gauls.  In the Middle Ages, because people didn’t have any way to tell time, or to find their way back to the village if they got lost in winter, Charles I “Charlemagne” (742-814) decided that monks should ring the bells at certain times of the day. The “salve” told farmers it was time to leave the fields at dusk. Beginning in 817 every village church in France became equipped with two bells and, very quickly, bells grew to be a tool warning villagers of an invasion, a fire or other catastrophe and calling everyone back to the village. The “tocsin” was born.

It was also during the seventh century that the Catholic Church decided that the bells should stop ringing on the Thursday before Easter as a sign of mourning. Church bells would only begin ringing again on Easter morning.  The tradition still holds today.  Parents still tell their children today that all is quiet because the winged bells have left for Rome to be blessed by the Pope. On Easter Sunday they come flying home to France laden with chocolate eggs wrapped in multicolored aluminium foil ready to be dropped to earth as they fly over housetops and gardens. According to French folklorist Arnold Van Gennep (1883-1957) the “winged bells” tradition actually dates all the way back to the twelfth century. 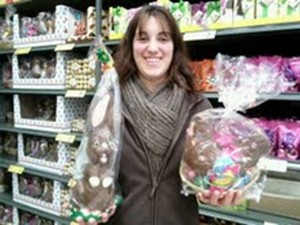 When children become too old to join in the traditional egg hunt they still are not forgotten in France. Another typical gift given to young people of all ages at Easter is a large, hollow, milk chocolate bell with small, speckled eggs of all colors inside. These colorful eggs are little oval shaped pearls are about the size of a jelly bean and crack under your teeth. Note we often find a big egg or a hen in place of the bell. All turn up wrapped around with an eye-catching ribbon. Of course the sadly beautiful moment comes when it is time to break up the milk chocolate chicken in order to eat the chocolate and get to the eggs inside.

Except in shop windows or Parisian confiseries, a holiday like Valentine’s Day goes pretty much unnoticed in France, basically because elementary schools don’t include it in their program and the Catholic Church ignores it as well. Besides, the French offer flowers all year around, especially when you are invited to someone’s home. As for chocolate, if the two really big chocolate seasons in France are still Christmas and Easter, the French consume different forms of chocolate all year around. Guess who is the number one chocolate producer on the French market? You are wrong. It is, not the Swiss Lindt, the Belgian Côte d’Or, or even the powerful American Kraft Foods’ Suchard, Milka or Poulain brands, but an Italian firm called Ferrero. Never heard of them? Well, ever heard of “Nutella”? While adults in France love having a little square of bittersweet chocolate with their espresso, the favourite French after school equivalent of American children’s typical peanut butter and jelly sandwich remains a couple of squares of milk chocolate on a long piece of baguette.

Something “fishy” going on this year. 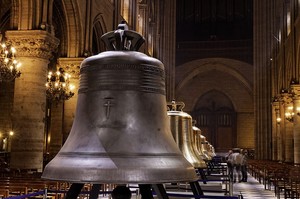 The ringing of Easter bells will be special in Paris this year. Notre Dame Cathedral has just equipped itself with nine new bells. The biggest one, called “a Bourdon” weighs six tons. Until January 2013 there were only five bells in all, four bells dating back to Napoleon III and the huge “Bourdon”; that rings in F sharp; dating back to Louis XIV. There was a second Bourdon bell, but it was destroyed during the Revolution. with modern day technology, it only took fifteen minutes to hoist each of the new bells into the towers. When we think that Louis XIV’s Bourdon weighs thirteen tons and its clapper a thousand pounds, imagine hoisting them by hand? The smaller bells are used most of the year, but it is the Bourdon that rings for holidays like Easter. This year, for the first time since 1789, there will be two of them flying back from Rome!

With today’s global warming, it is increasingly difficult to predict the seasons here in Europe.  Moreover the dates for Easter change from one year to the next. Easter Monday is a State holiday, so nobody works and, school children get two weeks off at Easter. Naturally everyone, especially the children, hopes for sunny weather. Sometimes we are lucky and it can be really warm. I remember one grandmother nearly sobbing as she told me how she had hidden some of her best chocolate Easter eggs in a low metal drain pipe on the back side of the barn. By the time her grandchildren arrived, the sun had been up for some time. I don’t think we need to tell you the rest of the story?

Because fish are a Christian symbol, we find them in the form of candy at Easter, often made from white chocolate. But fish are also the major April Fool’s symbol here in France. The favourite joke among young people is to sneak up behind you and scotch tape a hand drawn fish onto your back, then stand back and shout, “Poisson d’avril !” (April’s fish!). Since fish and water go together, with April Fool’s Day falling on Easter Sunday this year , let’s just hope it won’t be too sunny, too early, but also that the Bells won’t decide to play a mean trick this time, like maybe… making it rain all weekend?