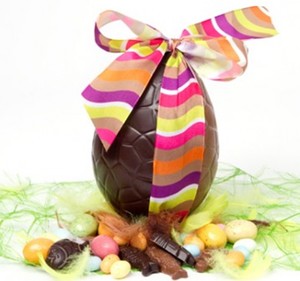 If you seen the Swedish film director Lasse Hallström’s delightful movie or read Joanne Harris’s book Chocolate, you may remember that, as is the case with eggs, it was strictly forbidden for Catholics to eat chocolate during lent, but not at Easter!   I recently asked a small group of  French friends just what “la fête de Pâques” meant to them.  Sometimes it was, of course, bells and chocolate, but, as you will see, there were also other surprises in store.

In 1945 I was five years old.  I come from the Vercors mountain region near Grenoble.  It was a major rallying point for the Resistance fighters during WWII and it is a region that suffered cruelly at the end of the war. I was born in a small village of 150 inhabitants called St Martin le Colonel – the word “colonel” meant farmers in old French We didn’t have Easter egg hunts in St Martin, but I don’t think it was because of the war.  Everything at Pâques centered on the village church.  On the Thursday before Easter our parents always told my older brother and me that the bells had gone to Rome to be blessed by the Pope, but no-one said anything about bells dropping chocolate eggs on the way back home.  You see, Priests did not get a salary at that time.  They depended on their parish to survive.  Maybe it was because the priest sold us all small chocolate eggs at the end of Easter mass?

At Easter the local baker sold sugar crust pastries, something like a gingerbread man, called a “pantin” or puppet. Most of the families in St Martin also made, and still do, a sweet brioche cake in the shape of a wreath for Easter. The recipe has been handed down from the Middle Ages and the cake is called “pogne”. When I was a child we took the cake to the local bakery to be baked in the wood fire oven and I remember that one year our cake was so big, it took four people and a door to carry it!  When I was a child Pâques was also a time for spring house cleaning, a big family dinner and, above all, new spring and summer clothes.  Manufactured children’s clothes didn’t exist after the war. Mothers made their own clothes or had them made.  We were lucky, our mom was a good seamstress, but new fabrics were rationed and very expensive.  She cut our “new” clothes from our father’s or grandparents’ used clothes.  The colors were most often beige or grey and the material frequently striped.  Then one year, when I was around seven, Mother was actually able to buy new fabric for the first time.   That year she made me a pink nightgown with little roses and veils.  I remember I didn’t want to take it off.  I wore the nightgown all day long!

If I didn’t choose to become a landscaper because of Easter and Bells, I’ve always loved changing nature into a surprise.  I was raised in Bordeaux in the southwest of France.  As children, Easter Sunday was like a treasure hunt.  It was also a difficult moment, because we were always told that maybe the Bells would come, if we were good, “sage” in French.  If not they would continue to fly on their way. 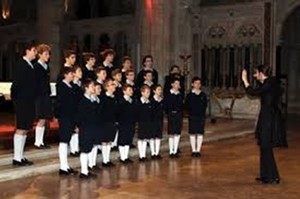 The Bells always ended up bringing their precious cargo until I was eight or nine years old and there was always one big chocolate hen and a big chocolate egg, all under cellophane and full of little colored eggs for me, my brothers and sisters somewhere in the garden. One year we even found little stuffed animal chicks that peeped when you squeezed them.  Our parents hid the smaller eggs everywhere imaginable including in the trees so that it would look like they had really fallen from the sky as the Bells flew over. At that time I was also a part of the national French choir group called Les Petits Chanteurs de la Croix de Bois. As I became an adolescent being a part of that famous choir made holidays like Easter even more special.

I’m from Paris, where we lived in an apartment, but our grandparents lived near Beauvais in the Oise region about an hour north of Paris.  They had a house and garden, so we went there for Easter dinner at noon and there were always lots of smaller eggs in foil and a big one full of colored eggs in the garden.  With our own two children — at 18 and 20,they are nearly adult now –we’ve never celebrated Easter religiously and they have never really been into eating chocolate.  We used to give them toys when they were small.  When they got older we gave them clothes.  Strangely, they never asked us for chocolate instead?

My worst Easter memory dates back about twenty years to when our son was a year and a half and our daughter five years old.  It was a beautiful Easter Sunday.  We were invited to have a drink just before 11am mass at friends who lived in the nearby vineyards here in the Yonne valley.  The friends had a wonderful garden, so we carefully hid the chocolate eggs in the car and, once we arrived, my husband scattered the eggs all around their huge yard.  While we were sipping our aperitifs we invited the children to go out and see if the Bells had left any eggs.  Ten minutes later our daughter showed up in the living-room in tears.  We had dressed both children all in white and they were now standing before us covered with…melted chocolate.  My husband snuck off to the local village boulangerie (baker’s shop) and quickly stocked back up on a new batch of chocolate eggs to hide.  But, having saved the egg hunt, we still all had to trot off to Easter mass “as is”.

I’m from the Alsace region just next to Strasbourg on the German border.  Our region has retained the myth handed down from the goddess of fertility called Ost and her rabbit. We usually spent Easter at my grandmother Lilly’s house.  There were my brothers and sisters, but also all the cousins who joined in.  We always got a chocolate bunny as children and still do.  We also got the usual chocolate eggs as well.  Most important, my great grandmother Marie and my grandmother Lilly made a traditional cake in the shape of a lamb called “lamella”. 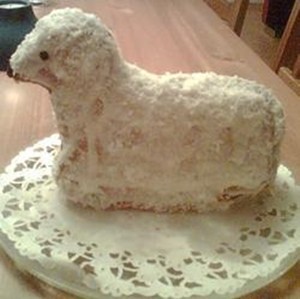 A lamb cake from Alsace

For our readers: You can order the molds on the Internet from Lehman’s.  Read their Lehman family decoration ideas for this cake.  They are precious.

Work the butter and the sugar together until it forms creamy foam.  Add the eggs one by one and mix.  Sift the flour with the baking powder and salt then add to the butter-sugar mixture, alternating with the milk.  Mix well.  THe final whipped mixture must be light.  Butter the mold and pour in the mixture, leaving enough space for it to rise.  Bake in an oven at 300°F for 45 min.  To check if it is done a knife must come out “clean”.  Let it cool, then take out of the mold and sift over with powdered sugar.  (See Lehman’s suggestions for decoration.)  There are various lamb cake molds on the market.  If yours doesn’t have clamps, think to tie it together with string to prevent it from separating as it rises.