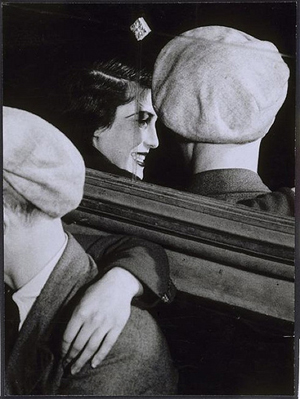 There is a jovial group of youths sitting in the shadows of an ambiguous dance hall. Their expressions show the serenity that only absinthe and rich French wine can provide.

There are dark, mist-filled streets that only the seediest creatures of the world could populate. The whores of Pigalle lurk, like deep-sea creatures with luminescent lures to attract prey on the streets of Paris.

Pablo Picasso creeps like a cat along the walls of his studio, studying his newest sculptures with his calloused hands.

The cafes of Montparnasse in the 30’s are crowded with the highest creative minds of the 20th century. Full of ambition and hunger, men like Jean Cocteau and Ernest Hemingway write opuses and operas. There to capture every sparkling, surreal moment is a heavy browed man, stalking about the filthy rooms. This man is Gyula Halasz, otherwise known as Brassai.

Picasso called him “The terrorist” because of the flash powder Brassai chose to use in capturing his subjects. It caused minor explosions in the dimly light bars and cafes that he frequented.

There have been many books and films dedicated to the les Annees Folles, the Crazy Years, that took place on the left bank of Paris in the 1920’s and 30’s. Although we can use our imaginations to formulate what the characters looked like and how the streets might have looked in Tropic of Cancer, thanks to Brassai, we know.

Born 1899, in Transylvania, which became part of Hungary and is now within Romania, our infamous photographer is from a small town called Brasso. After a brief stint in art school and the army, he finds his way to Paris, France working as a journalist. Though an artistic man by nature, he regrets the natural tool to the journalist: the camera. He works and circulates within the inmate intellectual circles of Montparnasse.

After what he describes as a happy accident, he finally takes up arms with the camera and begins to document his fantastic surroundings.

As is true with many journalists, Brassai was, “…equipped with no ordinary eyes,” as American author and friend Henry Miller described.

He chooses a nom de plume for his new artistic endeavor, Brassai, meaning from Brasso. He begins setting his antiquated camera, a Voigtland-Bergheil, on a trusted tripod to seize the darkness and mystery of Paris at night. 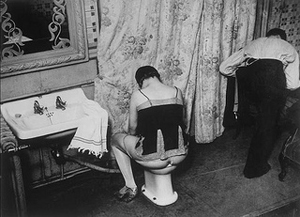 Nearly all of his photographs are taken during the nighttime, either lit by the eerie gas lamps of the boulevards or the interior electric light of cafes and bars.  Because of his choice to photograph at night, he not only portrays the beauty of the nocturnal city streets but the surreal and bizarre people that flourish in those ominous hours.

His classic portrait entitled, “Bijou of Montmartre,” is the perfect example of the types of characters Brassai was photographing. An aging, eccentric woman sits at Suzy’s, a small brothel in the Latin Quarter, adorned with every piece of jewelry she owns. As you gaze at the dusty diamonds and pearls wrapped around her fingers, the grime and filth that coats her hands leads the viewer to a seedy and sad actualization.

These magnificent stories are told truthfully and beautifully through Brassai’s photographs. The surrealist nature of his images is not through camera tricks or posed figures, it is simply because of the time he chose to work in.

Brassai’s social group included such visionaries as Pablo Picasso, Henry Miller, Jean Cocteau, Ernest Hemingway, Henri Matisse, Man Ray, and Salvador Dali.  There certainly was no lack of inspired conversation and scenery. With his unblinking, merciless eye, Brassai captured many intimate portraits of his friends that give future generations a voyeuristic glimpse into the lives of these great artists.

The everlasting importance of a place during a certain time can easily be forgotten in the pages of history. As Virgil Thomas said about Paris in the 30’s, “France was more than just another country…but a miracle spot like ancient Greece.”

Thankfully, Brassai was there to capture this moment in time for posterity. And unlike many history books or accounts of places in time, he chose not to show us the most popular side of Parisian life. Rather than turn his camera away from the penniless artists, winos, prostitutes and crooks, he focused in. He allowed their beauty to resonate in a way that is only done through the attention of a truly great artist.

Pierre-Joseph Redouté: The Raphael of Botanica