Home Archives Vézelay, a pearl from the middle ages in Burgundy 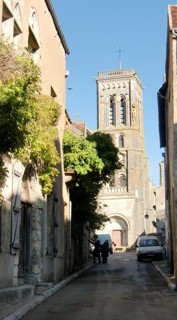 The french countryside is spotted with lovely little villages that offer a lifetime of exploration and learning. Thanks to Monsieur Charles Ceyrac, Mayor of Collonges-la-Rouge, the association called “Les plus beaux villages de France” was established in 1982.

Monsieur Ceyrac was facing the decline of an agricultural based economy and abandonment of these ancient towns along with their heritage. By chance, Ceyrac came upon an edition of Reader’s Digest with an article on “The Most Beautiful Villages of France” and within this article he saw a photo of Collonges. There were about one hundred villages featured in this article and Ceyrac decided to contact the Mayor of each village. From those contacted, 66 villages subsequently joined together to form an association dedicated to protecting, promoting and developing these towns known for their beauty and heritage. Today, the association has grown to include 157 villages in 21 regions and 69 departments of France. The organization is striving to keep these picturesque towns as communities without them being turned into museums. 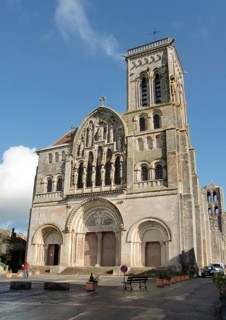 One of these charming villages that is an easy drive from Paris is called Vézelay. The village winds up a hill commanding an expansive view of the neighboring hills and valleys. The town’s crowning glory is its cathedral, Saint Madeleine Basilica, which was constructed in the 11th century and is a starting point for the pilgrimage to Santiago de Compostela. The church is considered a masterpiece of Romanesque art and it along with the village are classified World Heritage sites by UNESCO. In fact, it is the largest Romanesque church in France.

The structure was uniquely build so that every year when the summer solstice arrives and the sun is at its highest, the light coming through the southern clerestorey (the highest) windows forms large luminous circles of light at precise intervals.

According to the local legends, not long before the end of the first millennium a monk, Baudillon, brought relics of Mary Magdalene that were confirmed as genuine by Pope Stephen IX in 1058. Baudillon brought the relics from Saint-Maximin-la Sainte-Baume, in the southeastern part of France, to Vezelay, where they are still on display. There is a long, complex and interesting history concerning the church and historical events that is worth doing some research on especially if you decide to visit this lovely village. For example, Theodore Beza was born here who was John Calvin’s invaluable assistant. 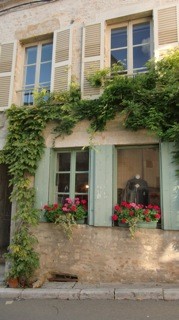 Within the town are narrow, winding streets, lovely views, buildings of architectural interest as well as charming boutiques and restaurants.

One hidden surprise was finding a plaque commemorating Marie Arnol (Sister Leocadie), Soeur Placidie and Soeur Marie for their assistance along with some of the citizens of Vézelay to hide and protect jewish children from 1942 until 1944. Marie Arnol has been recognized as one of the “Righteous among the Nations” by the State of Israel.

Walking around the exterior of the city will provide memorable panoramic views as well as a first hand look at the walled city, ancient gates and five remaining towers build in the twelfth century.

It should not be a surprise that fine local wines can be enjoyed during your sojourn in Vézelay. The vineyards reach to the edge of the town and produce a range of mostly white wines, based mainly on the Chardonnay, Pinot Noir and Melon de Bourgogne grape varieties. As in much of Europe, we have the Monastery to thank for planting the vineyards and establishing wine production in the area.

A lovely nearby town with a well know reputation for its wine is Chablis. If you are fortunate enough to have the time, there are numerous villages well worth your time to explore while trying the local wines and culinary specialties. 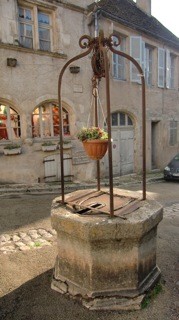 Exploring Vézelay and the neighboring villages will bring you a sense of simplicity of life and peaceful tranquility. Best of all, it can be a day or weekend trip from Paris.