Home Archives Round The World In Stone 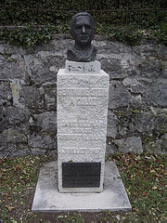 It interested me to know that a number of sculptors worked on busts of American expatriate Gertrude Stein… They are in different place including New York City.

The Lithuania sculptor Jacques Lipchitz had Gertrude sit for him in Paris. While she sat, they talked about art and especially sculpture. They had a certain affection for each other but Jacques was an easy man to like.

“Sculpture takes the trouble of walking around it to understand or truly see it”. She could not be distantly interested in sculpture although she was certainly vain enough to sit for Lipchitz. For him, she looked “Like a Buddha”, he remembered. “Yes, he said, ”I think she liked it. They did become good friends despite their differences. Jacques spent the war years in the United States and died in Capri.

Another featuring her was a seated bust by American Jo Davidson. He lived in New York and was of Russian-Jewish descent. This piece fittingly ended up in New York’s Bryant Park. This park was always associated with women and women’s rights so Gertrude ended up where she would be appreciated. It’s a life-sized sculpture of Gertrude seated. The piece was originally done in terra-cotta. I visited the park recently and was pleased to see people taking their turns having a picture taken with Gertrude.  Here is my addition.

Gertrude was much maligned during her life as were the 1920’s sculpture styles. But today thee works are all museum pieces and her work is taken more seriously by academics who remember her as someone who not only influenced others like Hemingway and Picasso, but set people off in new directions.

In Paris her two homes on Pere Lachaise or Rue Christine still draw visitors. Yet, over the years it was easy to poke fun at her. Here’s one person’s interpretation :

There once was a family named Stein

And nobody understands Ein…

NOT TRUE, BUT fun…

I find Gertrude in the work of Hemingway who said,

“In my lifetime I had two teachers, Ezra Pound and Gertrude Stein. Ezra occasionally right and Gertrude was always right.”

There is a chance to get closer to Gertrude by seeing her portrait done by Picasso that hangs in the Met in New York. You can feel her presence if you visit her grave at The Pere Lachaise Cemetery in Paris or you can visit the small town of Culoz in Ain near Aix Les Bains.

There in front of the Clos Poncet, where Gertrude lived for part of the war years, you can see another bust of Gertrude that was unveiled by Francois Mitterand in conjunction with a conference held in that town in the 1990s. She was feted for the information she passed on to the3 allies during the war.

Her image still interests visitors wherever a reminder of her is shown. Even now almost 60 years after her death, she draws a crowd. Gertrude died in 1946. Prior to her death she asked her partner, Alice B Toklas, “What is the answer.”

Alice was too choked up to reply.

“In that case,” Gertude added,”What is the question?”