Home Archives Pere-Lachaise: The Communards Wall and More at the World’s Most Famous Cemetery 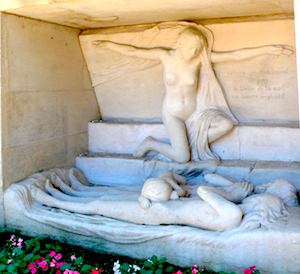 Although Parisian cemeteries are at their most atmospheric under gloomy skies, it is in springtime that le Père Lachaise calls me, more specifically to a section of its wall situated on its southeast corner, le Mur des Fédérés or the Wall of the Communards.

For the record, the Federates (Communards) were the people of Paris who took over the city in 1871 following the debacle to the Prussians. Twenty thousand Communards (some claim many more) were massacred during la semaine sanglante (the bloody week) of May 22-28. The last act of the tragedy was played out among the vaults of the cemetery when 147 men, women and youths picked at random were lined up against the aforementioned wall and shot by a firing squad before being thrown into a common pit with 871 other victims shot in the vicinity. The wall has become the emblematic memorial of The Commune and the shrine of left-wing causes. In the nearby 97th division is the grave of Edith Piaf, a befitting place for this native of Belleville who no doubt would have espoused the ideals of the Commune, proof if need be, of her vibrating rendering of the revolutionary chant, Oh, ça ira! Other monuments to victims of oppression are also situated in this area. 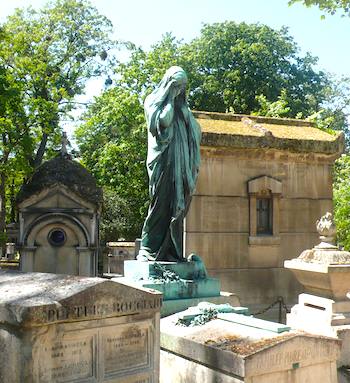 The 105-acre Père Lachaise is the city’s largest open-air space and the world’s most visited cemetery, a hilly stretch filled with old trees situated on the one-time country estate of the Jesuits. Le Mont Louis is named in honor of Louis XIV whose confessor, le Père Lachaize or de la Chaize, on the site of the cemetery’s chapel.

In 1804, however, when le Père Lachaise first opened, it was referred to as le Cimetière de l’Est. It was situated outside the city precincts as required by law, but butting the toll wall that marked the city’s boundary, now the site of the boulevard Ménilmontant and the cemetery’s western boundary. In 1860 the outlying suburbs were incorporated into Paris and the area embracing the cemetery became the 20th arrondissement. In all logic, the historical entrance is situated on boulevard Ménilmontant, facing the city down below, and rue de la Roquette leading up to it, “the sinister way” of funeral processions nearest Métro: Philippe-Auguste. Many visitors use the northern entrance along avenue du Père-Lachaise coming from Place and Métro: Gambetta. This section of the cemetery is more recent, more manicured and you can get free maps here. You will also do more downhill walking if you start here, but the old area down below is more atmospheric. 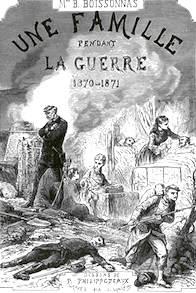 Back in 1804 few Parisians were eager to spend the rest of their eternity in this remote countryside, least of all the bourgeoisie of western Paris. The transfer here of remains mistakenly taken for those of Molière and Jean de La Fontaine was a marketing stunt, as was the transfer of the pseudo-Gothic monument of the medieval lovers, Pierre Abélard and Héloïse, who are whiling their time next to the old Jewish section with a chief rabbi, some Rothschilds and the painter Pissarro for companions! By 1830 the cemetery boasted 33,000 graves. Those who could were happy to pay a fortune for a tiny plot, let alone splurge on statues commissioned from the greatest sculptors of the day. In their vanity, unwittingly, they turned le Père-Lachaise into the world’s largest open-air sculpture museum, shaded by 5,300 trees.

A visit to le Père Lachaise is a journey into the Paris of the last two centuries, but seen “from the wrong side of the spyglass” to quote Balzac, who was disgusted by this “microscopic Paris . . . reduced to larva” and which “has nothing great left but its vanity,” witness the profusion of hollow, abandoned vaults with their rusty wrought-iron doors. Yet Balzac too joined the crowd and now lies in division 48 beneath his forceful bust, the work of the great David d’Angers, who rests here too.

So where does one start? To each his or her own. If you are a first-timer you are likely to follow the “must do” list: Oscar Wilde, Chopin, and Jim Morrison. If you are a savvy traveler, you may prefer to wander off and let chance guide you. How exciting to chance upon a writer you admire, Proust in my case, or Alfred de Musset, one of whose famous poems, memorized in our youth, is carved on his tomb. Or the great violinist Ginette Neveu, who died in the same plane crash as Edith Piaf’s lover, boxer Marcel Cerdan, who typically is less known to the general public. Or Kreutzer, whose studies have been daily nourishment to generations of aspiring violinists and to whom Beethoven dedicated a fabulous sonata. 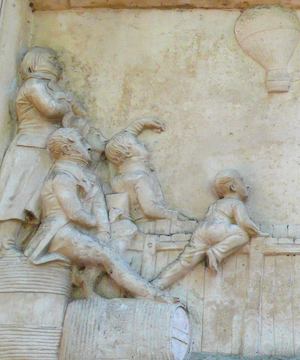 And then there are the endless street names and bus stops, reborn here into one-time fellow Parisians. For le Père Lachaise can be read as a compendium, with thousands of entries carved in the stone. To me in particular it is moving to stumble upon so many of the protagonists that fill my books, the physician Robert for example, who launched from the Champ de Mars the first unmanned hydrogen balloon, as depicted on the bas-relief of his tomb and in the 7th arrondissement of Around and About Paris. That Benjamin Franklin attended the event was no news to me, but what a surprise to see him here at le Père Lachaise, standing on a barrel to get a better view of the balloon! Paradoxically, at Le Père Lachaise the dead are strikingly alive.

Thirza Vallois is a long-time contributor to BonjourParis and is a Paris expert tapped by media like BBC, PBS, NPR and more. She is the author of several books, including Around and About Paris, Romantic Paris, and Aveyron, A Bridge to French Arcadia. You may read more at her website.