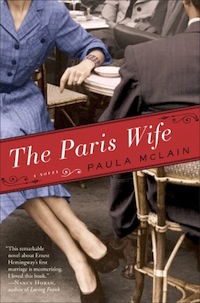 Paula McLain‘s wonderful new book called The Paris Wife is perfect for anyone interested in Paris, Hemingway, Hadley Richardson (Hemingway’s first wife) or the “Lost Generation” of Americans in Paris. (Not to mention anyone who has ever lost at love; that makes for a pretty broad audience, doesn’t it?)

Generally speaking, I approach historical fiction with caution if not outright suspicion. I like to know where nonfiction leaves off and fiction begins. I don’t like wondering about which parts of a book are based on fact and which are invented.

Of course this is an elusive matter in any work of either fiction or nonfiction, a troublesome truth Hemingway himself alluded to in the frontispiece to his memoir of his early years in Paris, A Moveable Feast. (“If the reader prefers,” he wrote, perhaps just a tad defensively, “this book may be regarded as fiction.”)

But for me The Paris Wife is a wonderful exception to the rule. This work of historical fiction tells basically the same story of the Hemingways’ early years in Paris that Hemingway told, this time from Hadley’s point of view. Drawing on extensive research, Paula McLain tells the story of Hemingway’s first marriage, evoking the innocence, tenderness and passion of young love as well as the heartbreak of losing it. She writes in such a way that both Hemingways are treated with respect, sympathy and compassionate understanding.

One of the many wonderful things about this book is that the story of Hemingway’s early years in Paris as told by Hadley are not starkly different than the way Hemingway himself told it. It is more comprehensive: the story begins with the couple’s first meeting in Chicago in 1920 and ends with his death in 1961. Here the relationship between the Hemingways is more fully developed than in A Moveable Feast. 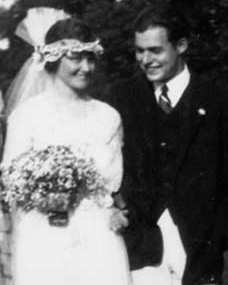 But The Paris Wife is really not “the other side of the story;” rather, it provides additional perspective on the story of a loving marriage that sadly went very wrong somewhere along the way.

And though the story of the marriage is treated more fully than in A Moveable Feast, The Paris Wife is not only about the marriage. McLain has brought Hadley vividly to life, revealing Hadley’s intelligence and belief in her husband’s talent, as well as her insightful and caring way of dealing with a difficult partner. This books sheds a fascinating light on Hemingway’s life and early work.

On the book’s website, McLain explains how she approached this work. “When I began to research my book, beginning with biographies of Hemingway and Hadley, and with their delicious correspondence, I knew the actual story of the Hemingways’ marriage was near perfect . . .. I didn’t have to invent a plot for them, nor did I want to…The most important step for me was getting Hadley’s voice. She has very little dialogue in A Moveable Feast, but what’s there is so evocative.”

I’ve read A Moveable Feast many times and every summer for the past 14 years I have taught it to students in my class, “Paris: A Literary Adventure.” To me it seems McLain has achieved her goal of “getting Hadley’s voice” brilliantly well. Hadley’s character comes through rich and full in The Paris Wife and is absolutely true to the way she is portrayed in A Moveable Feast. And though it’s clear that Hemingway treated Hadley very badly, McLain spares him the harsh judgment often visited upon his character. In The Paris Wife the man who became famous for his machismo is drawn in such a way that you see the bravado and the irascible nature that drove many of his friends away from him. But you also see a tender soul, and the brilliant, yet often insecure, artist underneath. The result is that the reader is able to understand why Hadley fell in love with Hemingway in the first place, and why she maintained fond memories of him in the years that followed their painful breakup. (McLain has taken care to show that Hadley had her flaws as well, though it’s hard to see her ever in a very bad light. Certainly Hemingway never did: about returning to her after being unfaithful, he wrote, “When I saw my wife again . . . I wished I had died before I ever loved anyone but her.”)

McLain has opened up the story of A Moveable Feast in a way that will delight anyone who ever wanted to know “more about Hadley.” And, given the insight provided into the historical details of the period in which Hemingway wrote his early work, it made me want to also go back and reread some of his early novels.

That’s something both Hadley and Ernest Hemingway would have liked, I think.

Janet Hulstrand is a writer, editor and teacher based in Silver Spring, Maryland. She teaches Writing From the Heart at the Essoyes School. Click on her name to more about her and read her essays published by BonjourParis.

The Wines of Margaux