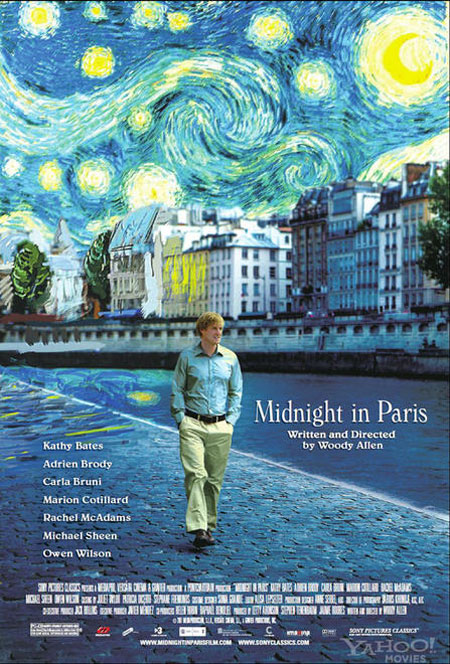 I am sure there are more than a few of the webizens of BonjourParis who wouldn’t mind traveling back in time to a certain era in the history of Paris. And I would bet the majority would choose Paris of the 1920s as their destination. I certainly would. Woody Allen’s latest film, Midnight in Paris, grants us that wish, transporting viewers not just to 21st century Paris, but the Paris of that exciting, wondrous and seminal era. It’s certainly Allen’s funniest, most charming, least anxious film since Bullets Over Broadway.

The opening montage of Midnight in Paris is undoubtedly the finest slideshow tour of Paris in cinema. Allen shows us all the sights of the city that we all have fallen in love with, famous and everyday, night and day, rain or shine, street-level and high above the rooftops. With this montage, we can see that Allen is obviously as in love with Paris as he is with Manhattan. It’s worth the price of admission just to see this. 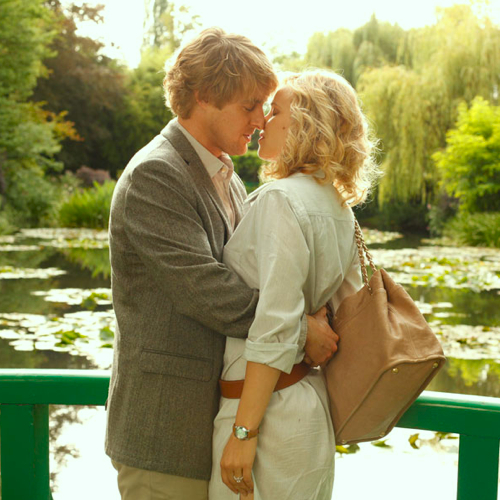 Also like the opening of Allen’s 1979 classic Manhattan, Midnight in Paris starts off with a voice-over, though here it’s a conversation between a man and a woman. The man extols his love of Paris and his regret that he didn’t visit longer when he was there as a young man. The woman scoffs and belittles the man’s feelings and tries to refocus his attention to their impending wedding.

And so we meet the couple, Gil and Inez (Owen Wilson and Rachel McAdams), two blonde Californians walking though Monet’s garden in Giverny. Gil is a screenwriter who considers himself to be a hack who’d rather spend his time in Paris rewriting his novel about a “nostalgia store” owner. Inez is, well… a blonde Californian. They both tagged along on her Tea-Partyish father’s business trip to Paris. Both are happy to be there but Gil is far more appreciative of Paris and the lifestyle, while Inez would rather just tick off the tourist sites. 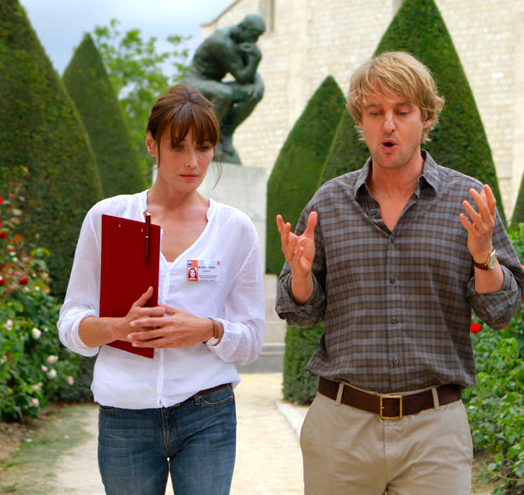 Paris and her famous landmarks star in every scene, present and past

After spending the day with the pedantic academic Paul (Michael Sheen), viewing Monet’s Water Lillies at L’Orangerie and visiting the Rodin Museum (where Paul contradicts the museum guide, played by the First Lady of France, Carla Bruni), Inez wants to go dancing with Paul and his wife. Gil declines, saying he needs to take a walk and clear his head. He ends up in the Latin Quarter where he stops to rest at the foot of some steps. A Duesenberg trucks up the hill and stops in front of Gil. A man dressed in a tuxedo steps out and invites Gil into the car, further encouraged by the man’s companions. And so Gil’s excellente aventure begins. Gil is confused at first, not sure whether he’s dreaming, hallucinating or dead. But eventually he simply go 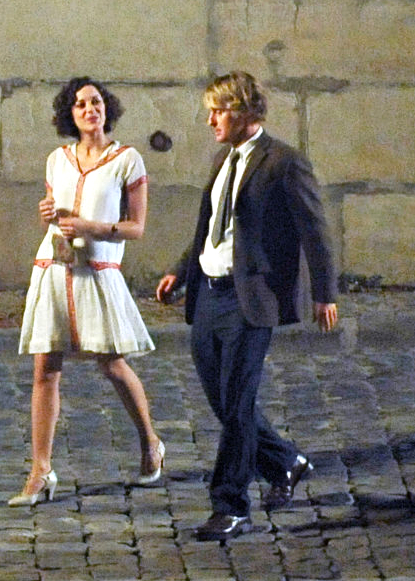 es along with it, and his confusion turns into delight, wonder and excitement as he meets the various writers and artists who populated Paris in that era. Gil doesn’t try to figure out how he’s going back in time or any sort of “butterfly effect” ramifications of his journey; he just has a series of wonderful nights out. Gil eventually falls for an artist’s mistress (Marion Cotillard), with whom he shares a nostalgia for Paris, though hers is for La Belle Époque. When he’s back in the present, he’s dealing with Inez’s infatuation with Paul and her parents’ complaints about him and being in France. It’s no wonder he wants to go back in time every night.

As Gil, Owen Wilson provides a suitable persona for the creatively adrift writer. Wilson smoothes out Allen’s voice, making it less neurotic and thereby more accessible and empathetic. McAdams is pretty enough to make Inez seem less prickly and whiny than a few other blonde actresses would have made her seem. Michael Sheen, too, holds back Paul’s know-it-all demeanor enough to prevent him from becoming intolerably douchey. Marion Cotillard gives Adriana a sexy vulnerability with some nostalgic ennui mixed in to make her fascinating and reason enough for Gil to fall for her. Of the other 1920s characters, Adrien Brody‘s portrayal of a certain Spanish artist is memorably hilarious. 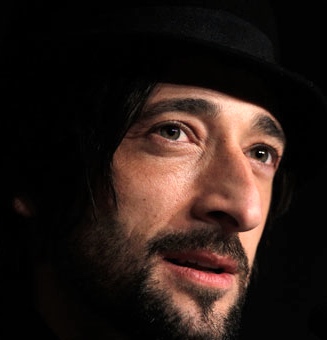 The movie is about nostalgia for an era one has not experienced, only read about or seen in movies or documentaries. I’d just seen a PBS documentary, Paris, the Luminous Years, the week before I saw Midnight in Paris, so this film struck a chord with me. I knew exactly how Gil felt about Paris and Paris of the 1920s. As Allen’s (and our) avatar, Gil is never criticized or demeaned for his nostalgia, though he eventually comes to realize that essentially, there is no time like the present. The epiphany is handled with a light touch, not over-analyzed or pounded into our minds. I was reminded of an episode of The Twilight Zone, “A Stop at Willoughby,” wherein a world-weary modern man is transported to a small town in America at the turn of the century. While that man is almost desperate to escape his troubles in his own life and live during a simpler, less harrowing time, Gil wants to experience the firestorm of creativity and confluence of artistic endeavors that was 1920s Paris. Midnight In Paris takes us along for that wonderful, magical ride. Allez!

Larry Guzman is a longtime Parisphile and movie fan.

Create your own “Midnight in Paris” walking itinerary and add the DVD or Blu-ray to your home library. Click on an image for details.

France in the Central Highlands of Mexico