The Drunk Across the Street

Never saw him before, and I’ve spent hours looking over the rail of this balcony for years, but there he is, doing his dance or just staggering. It’s hard to tell. Is that a tango he’s attempting or limbo dancing, sublime or ridiculous—or is he just trying to keep his balance? Or maybe he’s giving a speech, burying Cæsar, not praising him, or vice versa, depending. At this distance, I can hear that he’s talking, in fact he seems to have a great deal to say, but I can’t make out a word—and I doubt at street level it would make much difference.

Why he’s standing by the rear door of the ratty café makes no sense either… but who expects drunks to make sense? That is simply where he has stopped to dance his dance or give his speech or simply grind to a halt for the time being. He could do worse. A few people walk down this quiet Paris street that leads to nothing in particular. The drunk holds out his hand to shake or to high-five, and most ignore him, except now a stout man stops and does shake his hand. Do they know one another? They could. The drunk reaches into the large plastic bag that he’s been dancing around or perilously near, pulls out a bottle of beer and hands it the stout man. He shakes the drunk’s hand again, gives him a hug, and off he goes, quickly enough, beer in hand. The next few badauds dodge slightly, shrug, look away—ignore him elaborately.

Not at a loss, he heads toward the ratty café’s back door, and doesn’t get far. His head disappears under the overhang, but his left leg and that side of his back are still visible—and after a few seconds so is one of the waiters who is pushing him back more with gestures and words than a shove, then locks the door. The drunk returns, via several circles and tangents, to the big plastic bag on the ground, reaches in, and pulls out a bottle of wine—red by the shape of it—and holds it aloft, displaying, worshipping, admiring, something. Then he turns back toward the locked door, seems to gesture at it, finally retreats, having made no progress or breakthrough there.

Another couple of minutes of tangoing or speechifying with the wine as his prop. He stops. Gently, amazingly gently, he brings the bottom of the bottle down square on the pavement. Not a sound, at least not a sound up here on the fourth floor seventeen metres above the street, but he has broken the bottom off the bottle and the wine pours out on the sidewalk. He drops the broken empty in the gutter, goes back to the big plastic bag, pulls out the beer carton and another identical wine bottle, places them on the ground, balls up the bag, and drops it the street with the broken bottle.

Another man comes toward him—and triumph!—another handshake, but a quick one as he goes to the back door which the waiter opens for him, and shuts right on the drunk’s toes. He retreats again, picks up the broken bottle and the bag and, though there is a poubelle no more than three strides behind him, he weaves and dances his way across the street to my side, goes to the corner, and turns. Two minutes later he is back, empty handed, pooped. He has slid down the side of my building. Though I haven’t seen him drink a drop since I first noticed him, he seems even drunker as he gets to his feet through about seven stages of push, grab, bounce, kneel, and jump, and comes back to his original post. He bends to pick up the wine bottle, but it could be that the rotation of the earth is threatening to throw him off and into orbit. He sticks out his arms for balance, walks up to the parked cars that he has been touching now and then with his palms as if patting a clever little child on the head or maybe a good dog. He squares up, then bends down, trying to unzip his fly with one hand—I’ve tried it: don’t—marshals the other hand, unzips and, sure enough, whips it out.

And nothing. For the better part of a minute, he just stands there, producing nothing at all, looking unbothered by his bashful kidney or whatever the euphemism may be, then he begins to pee, really begins to pee. A woman with a daughter about ten and a little boy of about three approach. The mother gestures, the girl picks up le petit frère, and they all accelerate behind the peeing drunk. He continues to pee, ninety-seven seconds by my sweep hand. No doubt the Guinness Book of Records has a number or two that would put this one to shame, but that is one long and admirable pee where I come from—no pissing contest with him.

Refreshed or freshly inspired, he tangoes to the main street, the front of the café. Right on the corner, I can see the back of a woman and, going by the angle of her head and gestures, she is with someone, sitting to her right, but invisible. The drunk holds out his hand. Ignored. He speaks or declaims. Ignored. He holds out his hand again—and the same waiter appears now from the front of the café, puts his hand in his chest and backs him up three or four steps, talking all the while. So is the drunk who does not resist, but makes his way back to his wine bottle and beer carton, crouches toward or around them, pushes up off the ground once or twice, and finally snags both. He parades them along the side street windows of the ratty café. Is he tempting the patrons inside, inviting them to come out and share a drink with him, demonstrating he gets drunk on a better vintage and brew? Not working.

But he has made his way back to the corner, to the table of the woman and her invisible companion, weaving back and forth, yawing, listing, taking on water, but keeping his balance. He puts the carton and the bottle on the woman’s table and disappears from my sight around the corner. Twenty, thirty seconds pass, the wine and the beer sit on the table. A peace offering? Without a fatted calf handy, he has offered what he has, a classical libation, propitiation. Except he comes back after another half minute or so, gets his hands around the bottle and the carton, and vanishes for good around the corner.

For the first time in forty minutes, I look up from the street and notice the couple across the way, whom I’ve seen from time to time, looking out from their dormer at the same scene. I catch their eyes and shrug with my hands and shoulders and my little twisted smile. They duck in and close the window. I wonder what they think, what they make of this—and why they seem embarrassed by my glance.

The next morning with coffee, I look across the street.  The windows to that apartment are all open, and I can see in. There is no furniture, no pictures on the wall, no curtains on the windows, no one home. I have no idea.

Before you go to France, explore the wine regions of France from your armchair . . 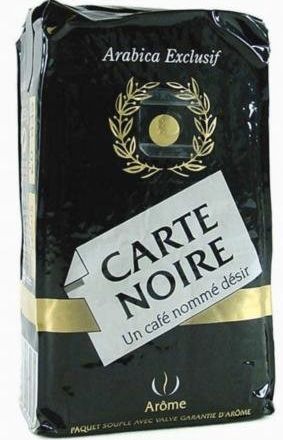 Six 1-pound bags of the very best French coffee some of us cross an ocean to get. Oui, Carte Noire is that good…and now it’s available here at our Amazon.com French Marketplace. Enjoy!