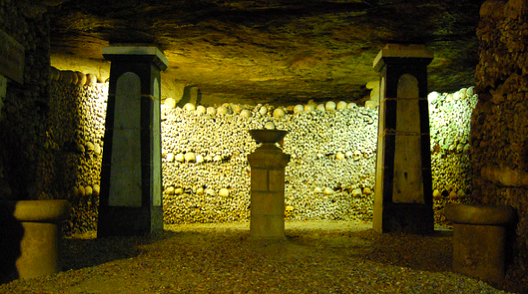 Since the founding of Paris, Parisians were used to burying their dead in cemeteries, often close to churches, according to the Roman Catholic tradition. However, as the population of Paris grew over the centuries, the city’s cemeteries quickly ran out of space. As a result of the unsanitary conditions, Parisians began to complain of the terrible odor and public health risks. In response, the government decided to use Paris’s underground system of tunnels to bury its deceased citizens. This underground burial ground, officially named l’Ossuaire Municipal, became known as The Catacombes and is one of Paris’s most visited attractions.

The idea to use the underground tunnels of Paris to bury corpses came from Police Lieutenant General Alexandre Lenoir, and his successor Thiroux de Crosne was responsible for initiating the burials in the Catacombes beginning in 1786. The tunnels where the burials began to occur were abandoned stone quarries beneath the city. These tunnels were dug during the 12th century and had become prone to collapse, including a deadly incident on Rue d’Enfert in 1774. The decision to use the tunnels for burial was practical for two reasons: it eliminated the contamination of the local air and water by having dead bodies not properly disposed of and it forced the city to shore up the underground passageways as they buried people. 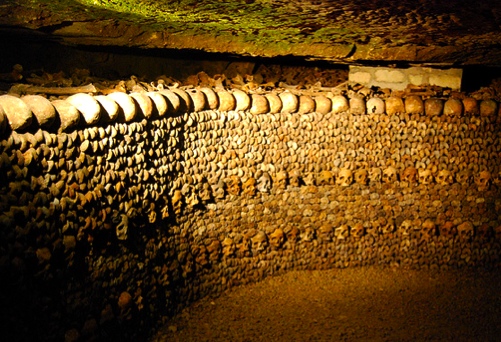 In 1810 Louis-Étienne Héricart de Thury began to lay out the Catacombes into a more museum-like setting. Mr. Thury, a politician and scientist, had a great knowledge of the Catacombes and wrote the Description des Catacombes de Paris in 1815, which became the absolute reference for anyone involved in the history of the Catacombes.

Throughout the history of the Catacombes there have been other uses as well. During World War II, French Resistance soldiers used the tunnels as an underground hiding spot. Eventually the German Soldiers gained the Catacombes and established a bunker of their own right under the Lycée Montaigne, a famous high school in the 6th arrondissement of Paris. 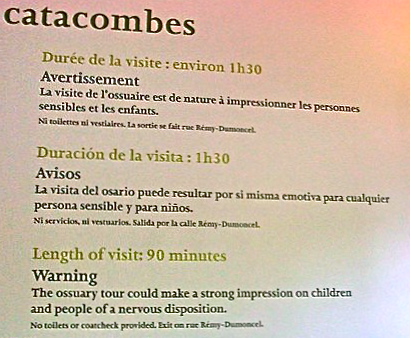 Nowadays, the Catacombes are an amazingly peaceful place to visit that attracts an incredible number of visitors every year. Here are a few things to discover while walking through the dark aisles of the Catacombes.

An adventure in the Catacombes is a unique experience. To get to the burial chambers, descend 20 meters below the surface of Paris’s streets. Suddenly the world will change from light to dark. Every time I have descended into the Catacombes I have felt like I am becoming the hero of a dark movie. You will know what I am talking about once you come out of the Catacombes.

The first exhibit that you will see is a rotating exhibit that is currently displaying photographs of the ossuary (burial room for bones).  After the entry, the catacombes flow into increasingly narrow passages where the temperature begins to drop towards 57 degrees F (which can be a nice reprieve from the heat on a hot and humid French summer day). Remember to bring a sweater or light jacket even in the warm Paris summers to prevent getting a chill under the city. There is no package check and there are no public toilets. 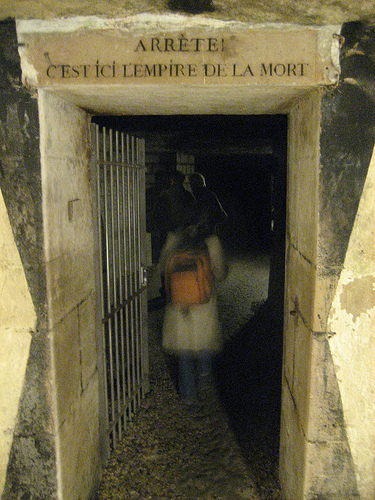 You are now walking under Paris, seeing things you’d never expected to see in such a place including sculptures of Majorca island, a footbath (once used by the quarrymen) and more. Suddenly, you will find the vestibule, a huge room, which is the entrance to the “real” catacombes. If you don’t speak French, I will let you know that Arrête! C’est ici l’empire de la mort (which is written above the catacombs’ entrance) doesn’t mean “Welcome!” but I won’t tell you exactly what it means … or you might run for the exit!

And I hope you won’t, because the show begins now. What you will see is amazing and what you feel unique! I don’t want to spoil it, but you MUST see the Stone Cross, the Samaritaine Fountain, the Sacellum Crypt, the Osteology Office (and its weird bones) and the “charming” Tibia’s Rotunda, also know the Crypt of Passion (I know, tibias are so exciting!…) where a wonderful concert was played in 1897.

You will finally end up in the last gallery, under Dareau Street, once known as the Catacombes street. You’d better look up if you don’t want to miss the highlight of the show: two amazing 11-meter-tall domes.

Now, you can climb the stairs back to the ground and leave the world of the dead behind you. It will take a few minutes for your eyes to adjust to the brightness of the mortal world, but for your mind the recovery process will be much longer.

Going down under Paris in the Catacombes is truly a unique experience. I know there are plenty of things to do when you are in Paris, but you have to visit such a special attraction, no matter how long you are in Paris.

So make a trip to Paris to enjoy this one-of-its-kind museum, the Catacombes, the perfect example of the historic and artistic richness of Paris!

Learn more about Paris and create your own self-guided tours to cover all interests.