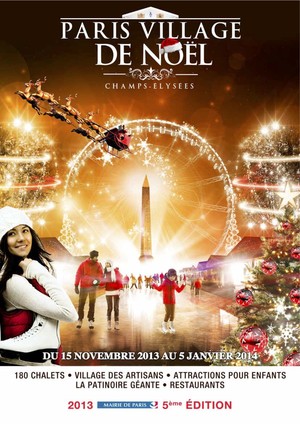 The days after Christmas

In Belgium, the Netherlands, Eastern Europe and Germany the Christmas season begins with Saint Nicolas Day on December 6th.  There’s Christmas and then once again, for the Germans, it’s Saint Stephens Day and for the Brits and the Irish it’s Boxing Day.  Both fall on December 26th, the day after everyone else’s Christmas.  But the great thing about France is that Christmas begins in November only to go on seemingly endlessly right up to the spring solstice.  It’s all about lights, food, get togethers with friends and those seeming innumerable festive holidays.

Just in passing, if you are in Paris until the end of the year, don’t miss the opportunity to attend the free organ concert at Notre Dame Cathedral beginning at 4:00 pm on Saturday, December 28th.  With classics from Bach, Dupré, Franck and the totally modern George Baker – ah, yes, that too is France – this will be the last concert, alas, before the organ falls silent, renovation oblige, until autumn of 2014.

In the East of France, Alsace-Lorraine celebrate St Nicolas Day and, like everyone in the rest of the country, the region  also celebrates January 6th, La Fête des Rois or Three Kings Day, around a twelfth night cake or “galette des rois”.  But don’t think “la fête” ends there.  The person who finds the “feve” or small porcelain figure in his or her slice is crowned King or Queen and given an appropriate gold carton crown to wear, but he or she must then provide a second galette to share the following week!

Hôtel de Ville in Paris, one of the star s in the City of Lights with a free, open air ice rink

Stores and supermarkets continue to abound with tons of tangerines, nuts, cheeses and pâtés, when it’s “crêpe time”.  February 2nd is the “Chandleur” holiday, time to invite family and friends over for a wafer-like pancake making feast.  Mardi Gras follows and builds up to Carnival.  By mid-March the stores are decorated with bunnies and bells and their shelves overflowing with Easter chocolates of every size and shape.  The agenda just seems to go on and on.

The French tendency toward discretion has often given France an unfair reputation abroad as being a callously self-centered and chauvinistic culture.  But there is so much more to the story.  Isn’t that the very reason UNESCO placed the way the French “go about their habit of eating” on its 2010 list of intangible treasures to be safeguarded at all costs?

Whether or not we blame it on the commercial bug, it’s also a fact that France is externalizing more and more its holiday spirit.  Village and towns alike have their multi-lit trees and dazzling street decorations.  Strings of coloured lights and Christmas illuminations increasingly adorn lawns, facades and roofs of private homes.  What’s more, most of them continue to fill the night from December 1st on through to January 31st.  Each neighbourhood in Paris is a village and at Christmas and New Year’s the capital lives ever more up to its reputation for welcoming tourists from around the world.

Where to go on New Year’s Eve?

If you’ve decided to spend New Years in Paris and don’t intend to spend it locked away in a hotel, you may wonder where to go?  Much depends on whether you long for the excitement of Paris adorned to its fullest and don’t mind the tourist crowd or if you crave keeping under wraps in some intimate French style hideaway.  A “tête à tête” New Year’s dinner in Paris will be difficult to find for less than €150 per person, since most of the meals are of gourmet quality and the wines, sparking and other, add up quickly.  There are numerous clubs open all night, but sharing a dance floor with 1800 other dancers is hardly what one would call intimately “romantique”.  In both cases reservations in advance are a near “must”. 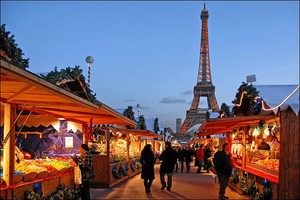 If, on the other hand, you don’t want to empty your pocketbook and still want to experience that French style “Times Square” atmosphere, there’s another solution.  Why not ask the hotel if they wouldn’t mind cooling a bottle of wine for you for New Year’s Eve?  Normally this shouldn’t be a problem.  Then drop by one of the local Monoprix a day or two before and, note, you don’t need to choose a bottle of Dom Perignon at €122.  Some plastic goblets and a bottle of organic Bailly Lapierre Crémant de Bourgogne at €9.26 will do the trick. If you really want Champagne, you’ll find an excellent choice from €20 to €30 labelled J.M Gobillard, Demoiselle or Joseph Perrier.  Choose one of those carry out bags — the ones with French inscriptions on them are also a great souvenir to take home — and you’re all set to ring the twelve strokes of midnight with the crowd at the Arc de Triomphe and on the Champs Elysées.

Contrary to Bastille Day, there are no fireworks displays in Paris on New Year’s, but there are any number of Christmas Markets to hang out in while waiting for midnight to roll around without going hungry. There are restaurants but also stands featuring everything from hot cider, roasted chestnuts or crêpes suzettes, to country hams and sausages, cheeses, a myriad of breads, decorative candles, aprons, jewellery and every idea for souvenirs to please friends and family back home.  If you haven’t had enough by midnight, many of them are open through January 5th.  After the numerous “bises” (pecks on the cheek) to wish in the Frenchiest of New Years, a hot chocolate in one of the many cafés is a great way to end the night of nights before heading back home. 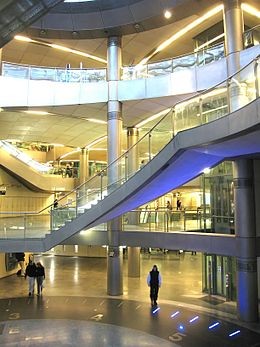 And for the younger generation

If you’re in Paris with your family, one of the smallest markets, but not the least, you’ll find Blvd St Germain.  As for the market along the Champs Elysées, it includes rides for the children and a free skating rink (skate rental €5).  The Christmas Village, across from the Eiffel Tower in the Trocadéro Gardens also provides a free skating rink (skate rental 5€), as does the Hôtel de Ville and, if you start early enough,  the Charléty Stadium, even offers a 300m² snow garden and tons of games for young people 3 to 16.  In all, eighteen arrondissements offer merry-go-round rides for free from December 21st to January 5th from 10:00 am to 7:00 pm.  You can see a list here: http://www.evous.fr/Carrousels-et-chevaux-de-bois-pour,1116626.html and you’ll find a full list of all of the Paris Christmas markets with their locations and dates plus a ton of other ideas on where to go and what to do thanks to the English version of the Paris Visitors and Convention Bureau’s site here: http://en.parisinfo.com/#

Be assured, the choices are limitless, and the metro, the RER and Paris buses will run all night from 5:00 pm on New Year’s Eve ‘til noon on New Year’s Day.  Best news of all, no ticket necessary during this time period.  You can ride them all free of cost.  So however you choose to welcome in the New Year, no-one will hold it against you if you decide on buying a second bottle of that sparkling French vintage.  You can have fun and let the RATP do the driving for you.