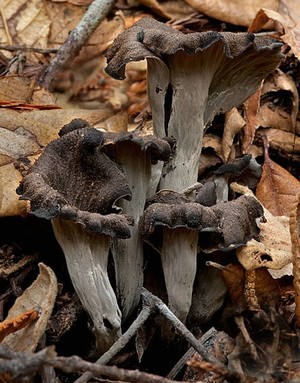 Each season in France is a time of gathering.  For those lucky enough to live in the country, when fall rolls around and the woods begin to lose their leaves, the ground cover comes alive with parasol, porcini and chanterelle mushroom just begging to be dried and stocked away in glass jars for winter.

As a young, middle class, west coast American, I was raised to turn up my nose at anything that didn’t carry a supermarket label.  But, life being as it is, fortune ended up taking me first to Paris and circumstances from Paris to central France.  There I married into a way of life where wild mushrooms were a pillar of country culture.  I quickly sought out and found tons of books with detailed photos and descriptions of every sort of known mushroom.   All contained innumerable diagrams and descriptions touching on such exotic subjects as the amanite phaloïde and other fatal varieties of mushrooms growing next to all of the equally edible and delicious varieties detailed on those precious pages! 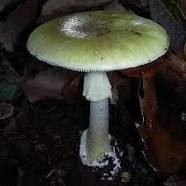 A hop, skip and jump down the path to the woods and Nature offered its visitor tons of marvellous golden and black Chanterelle, hedgehog, parasol and porcini mushrooms rubbing shoulders with equally beautiful and deadly mascara, lemon and phalloïd amanitas.  The fields across the road were carpeted with the wild ancestor of those cultivated button mushrooms we all buy regularly in cans and supermarkets all over the world except the difference in taste is something like comparing a wild pheasant to a domestic chicken.  Believe me, it was a difficult time.

Above all, don’t get me wrong.  Even in the country, the French don’t take wild mushroom eating lightly and intoxications are virtually non-existent.   Clubs run by experts organize outings followed by sessions where members can learn to handle, study and describe in detail both toxic and edible mushrooms.  Yearly exhibits open to the public can include up to 500 species!  Pharmacies all over France also organize seasonal exhibits and, even better, they remain fully available to help advise even non-clients, free of charge, concerning the varieties they have gathered.  Mycology is a part of the pharmacist’s University curriculum in France. 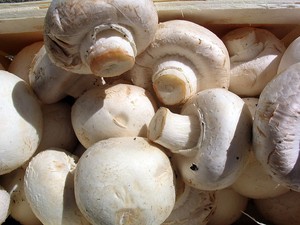 Button mushrooms were not difficult to identify and, of course, I regularly double checked my carefully sorted collection under the local pharmacist’s scrutinizing eye.  The problems arose during an occasional lunch at my parents-in-laws’.  Being a marvellous cook, my mother-in-law often included one of her marvellous grated cheese in béchamel sauce button mushroom pies.  Only hic, they were almost always made from mushrooms graciously offered by a neighbour and prepared and cooked beyond my control.  Believe me, I spent many a sleepless night for the first two years of marriage waiting for two days to pass and to be sure that I was destined to survive! 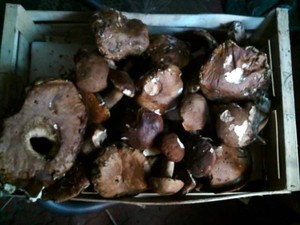 During a six-year stay back in Northern California during the late ‘90s, what was my surprise to discover delicious fairy-ring mushrooms growing on the lawn of a downtown doctor’s office.  When I asked the nurses if they planned on picking them the office fell silent.  They made me swear that their unplanned production would not poison me.  Note that I am still here to tell the story.

Be assured, beyond retirement age, I don’t intend to intoxicate anyone, myself included.  Many things in life we learn by hit and miss.  Some things we learn by logic, knowledge and experience taken seriously.  Wild mushrooms fall into the second category.  We are lucky here in France to have an available chain of facilitators who know what they are talking about and who are available to share their knowledge and competency.

Global warming has arrived here in France.  Both springs and falls are suddenly warmer and wetter than in the past.  This year the freezer and canning jars abound with wonderful mushrooms.  Out cutting wood in the forest behind the house, the love of my life happened onto a “Tripe du chêne” or polypore.  We trotted immediately off to the pharmacy and got the find certified “bon appétit” we shared it with the neighbour, prepared a big dish for dinner and popped the rest into the freezer. 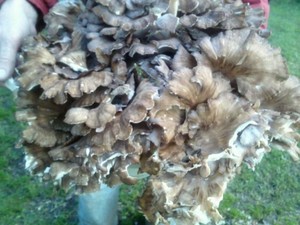 Here is my mother-in-law’s recipe for button mushroom pie. Don’t worry you can use supermarket mushrooms and it will be delicious.

Cover a pie tin with a pie crust (supermarket or homemade) and bake in oven until light brown.

In a saucepan, melt 20 grams of butter and add 25 cl of milk while whipping in two tablespoons of flour and a tablespoon of fresh cream.  Add sea salt and fresh ground pepper to taste.

Cook over a low fire for five minutes stirring continuously.

Wash and slice the mushrooms.  Brown them in butter.

Add the mushrooms to the sauce mixture.  Stir and pour into the baked crust.

Brown in oven and serve hot with a siding of green salad in vinaigrette dressing.

My Life with a Frenchman, Part I: The Blague is on...