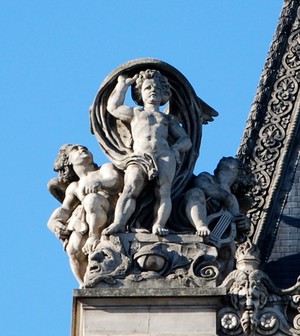 Silhouetted against the sky above the Louvre entrance across from the Palais Royal, angels rejoice in the glory of the arts and the power of the Second Empire: a neo-Renaissance extension of the Louvre expresses the artistic ambitions of Napoléon III.

Napoléon III laid the first stone of what would become known as the “Nouveau Louvre” in 1852. The Grand Dessin—or great plan—of King Henry II was 1546 to prolong the Louvre palace from the square courtyard to the then-extant Tuileries château. His dream was finally realized three hundred years later.

Work began in the sober classicism of Louis Visconti, the Emperor’s official architect, but his sudden death in 1853 led to the appointment of Hector Lefuel. Work on the buildings evolved to reflect Lefuel’s more exuberant style, with a lavish array of sculpted pediments and cornices and embroidered-stone borders of sloping mansard roofs. Three pavilions, an echo of Loire Valley châteaux, remained to be constructed and decorated, and an army of workers, artists and artisans had to be hired. One of the more unlikely candidates for the emperor’s project was the bohemian Romantic sculptor Antoine-Augustin Préault.

Préault’s work, in spite of its poetic expressiveness, had been rejected by the official art salon for almost fifteen years. Rebellious and insolent, he had alienated the powerful jury which could make or break an artist’s career by referring to it as the ‘reptiles’ lodge’.  But talent won out, and he acquired loyal and luminous friends including Delacroix, Lamartine and Hugo. Most importantly, he had the eminent architect Jean-Baptiste Lassus on his side.

Lassus was in charge of the restoration of the glorious Sainte-Chapelle and wrote Lefuel a persuasive letter, hailing Préault as “one of the leading artistic lights of our times.”  Préault was contracted to design a three-figure allegorical grouping for the Pavilion de la Bibliothèque—the imperial library building—for the grand sum of 12,000 francs.

It was an important and desperately needed commission for the 45-year-old wild child whose provocative personality often overshadowed his creations, many of which he declaimed and described in great length but never began or finished. The angels of the Louvre would be different, however. . .

The theme was the arts and sciences, and in an artistic tour de force Préault translated symbols from classical antiquity into his own stunning visual language. His angels are mini-Michaelangelos, virile, muscular, and curly-haired, standing in dynamic contraposto pose on the crown of the Pavilion’s roof.

On the left, an angel twirls a giant sash in a parabolic arch: an ingenious tribute to Mathematics. At the angel’s feet, a pair of cherubs twist to gaze upward at him, one with a long parchment scroll of Architecture draped across his lap. The other plays Music with a lyre, while a mask for Theatre rounds the angle of the plinth ornamented with the spherical astrolabe of Astronomy.

The crown in the hand of the brawny angel on the right is Physics—witty praise of Archimedes’ experiment in buoyancy to test the gold content of King Hiero’s crown. The palm branch waving triumphantly in the angel’s other hand symbolizes Grammar, while at his feet is Geometry, a grinning cherub with a compass. His counterpart, holding palette and brushes, portrays Painting, while Sculpture is evoked by the fine feminine profile medallion on the plinth.

An 1857 critic lauded Préault’s génies—the French term for angels on civic buildings—as “having nothing of that charming preciousness of those of the 18th century: they are strong and dense children, as a well-grounded art could form them: they dare to have muscles and stand out in vigorous contours against the sky.”

This captures exactly Préault’s spirit: “I adore fire, movement, freedom, and I try to lift myself from the mud to the stars.”

Préault received the Cross of the Legion of Honor in 1870; he died in 1879 and is buried in Père Lachaise cemetery in Paris.

Rosemary Flannery offers tours of Paris museums, monuments and neighborhoods. Please click on her name to learn more about her Passport to Paris tours.