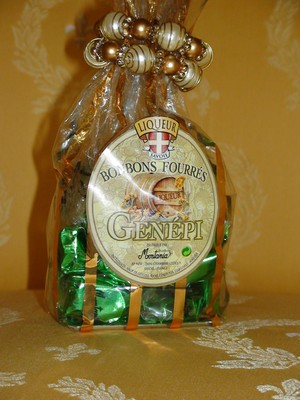 One delight of the summertime countryside in France is discovering unique local wares and produce that, while they are often available in Paris and from web sites, can really only be appreciated as part of the imminent scene where the item originated, that is, as part of the people, the sights and smells. A ripe June cherry clutched from a tree in the Drôme département compares little with another plucked from the same tree but then shipped north to a Paris market. We could get into a lively discussion about the ramifications of this kind of fresh but, suffice it to say, I’ve tried both and the “on the spot” sampling wins hands down.

Another example comes from the Alpes region and concerns the Génépi. Génépi is the general term given by residents to the strain of yellow wildflowers of the Artemisa variety found in the Haute Savoie, France’s Alpine département better known for winter sports and getaways. In summer, a plethora of small bunched yellow flowers atop tall green stalks push forth from rocky cracks and across valleys with panoramas of snow-tipped distant mountains, and create a visual majesty hard to capture on film let alone garner via dried arrangements and liqueurs. Though they grow wild, bestowing the region with fleeting scents of peppermint and bitters, there are restrictions on its procurement.

Nonetheless, the locals have succeeded in creating of this wildflower all kinds of goodies, the most well known being a pale yellow digestif called, and why not, Génépi. Macerated with alcohol, Génépi is a bitter sweet pale yellow drink that sooths in summer and warms in winters.

Although there are a number of commercial producers, many residents and restaurant owners in the Haute Savoie produce their own. Each mountaineer has his own “secret” recipe for Génépi, but the rule of thumb for each liter is 40 flowers, 40 grams sugar, 40 percent alcohol by volume. La Grande Chartreuse Monks, who have been distillers for four centuries, in the 1980s created their own secret Génépi recipe, derived from several macerations and distillations.

I recently was the grateful recipient of a package of Génépi bonbons (see picture), a gift from Parisian friends returning from their annual ski vacation. The hard candy, once sucked on, gave way to a liquid of a flavor, sort of éphémère (fleeting) as the French say, but with a bit of a punch and a shock of heat that told me one was enough. Try this as a surprise gift to your friends, that is once you exhaust all the popular foie gras, saucisse, wines, and other goodies with which we stuff luggage for our return from discovering la belle France.

Kathleen Burke is a writer and lover of France who lives in Paris and Massachusetts.

Find Paris sweet spots…or make your own at home with “Cooking with Chocolate” book and DVD in English.