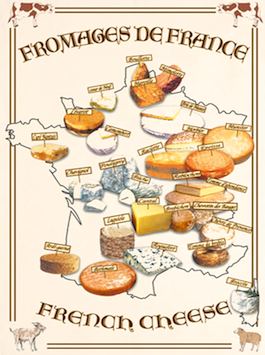 Jean Anthelme Brillat-Savarin (1755-1826) wrote the most famous book about food ever published: The Physiology of Taste: Or Meditations on Transcendental Gastronomy. In fact, it’s been in print ever since it was first published in 1825. Brillat-Savarin is considered the world’s foremost food writer and he said, “Tell me what you eat, and I will tell you who you are.”

Brillat-Savarin’s comment about French cheese was even more to the point and far more evocative: “Un repas sans fromage est une belle à qui il manque un œil.” (“A meal without cheese is a beautiful woman with an eye missing.”) The latter remains a fair representation of how the French today feel about cheese in their diet.

What would Churchill say today about a country that now produces about 400 varieties of cheese, according to the Cheeses of France Marketing Council? It’s easy to see why travelers can be overwhelmed by a French cheese course, with its vast selection and associated etiquette.

Basically, French cheese is classified in four categories: soft, semi-soft, hard and bleu. Their flavor values are described as mild, medium, strong, and bold. French cheese is made using milk from cows, sheep and goats. Here are some of the most popular and recognizable French cheeses, followed by etiquette tips to help when you face your first French cheese course. 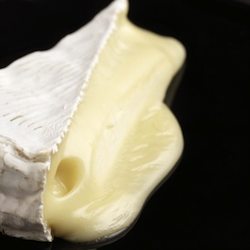 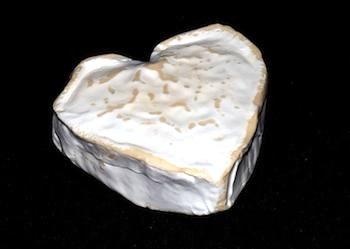 Brie, one of the world’s best-known cheeses, is considered the King of Cheeses. Camembert is arguably the quintessential French cheese, with a flavor a bit stronger than Brie. The next time you’re in a French grocery, you may spot les petites vieilles removing Camembert from its round wooden box in the refrigerated dairy section, then sniffing, prodding and thoroughly inspecting it before placing it into their basket or returning it to the shelf. Munster is a cow’s milk cheese with a highly aromatic rind from France’s eastern region of Vosges. Heart-shaped Neufchâtel is a soft and slightly crumbly cow’s milk cheese from Normandy that’s been used to make raviolis and French cheesecake with recipes that date back to the sixth century. Exceptionally creamy and from the Haute-Savoie Alps region, Reblochon has a strong, herbal fragrance with nutty trace. Try it melted on a baked potato. 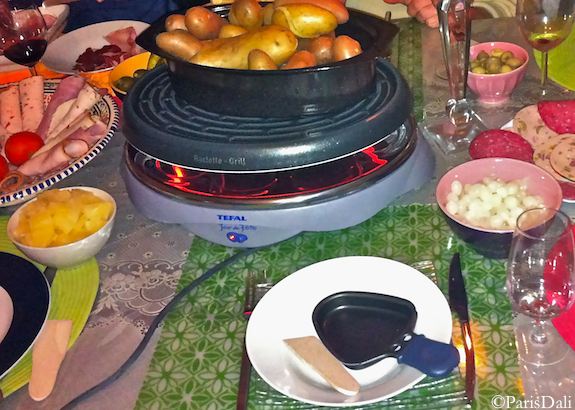 Port Salut, one of several semi-soft cheeses from the pays de la Loire, is a cow’s milk cheese with a bright orange rind and mild flavor. Raclette has a salty, nutty taste and a silky texture that makes it ideal for melting. It’s often served at parties and is a ski chalet traditional favorite. The grill is heated and guests put pre-sliced pieces of cheese into tiny individual irons placed on the grill. When the cheese is bubbling, a wooden spatula is used to scrape the cheese onto boiled potatoes, roasted root vegetables, ham and other cured meats, apples and other fruits. 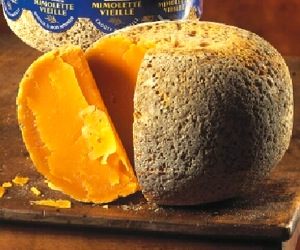 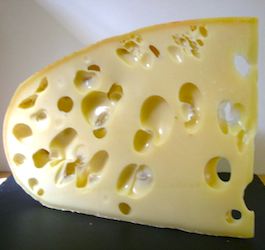 Butterscotch is rumored to lightly dance on the palate when savoring a slice of the hard, sharp and nutty Mimolette from Lille. Its brilliant orange color is an eye catcher on any cheese platter. Emmental has a slightly salty taste Americans will recognize as “Swiss Cheese” perfect atop a sandwich or burger. It is made in both the Bourgogne (Burgundy) and Rhône-Alps regions. Comté has little holes called “eyes” and it’s served cubed, on a sandwich, melted in fondue, or grated and sprinkled on dishes. 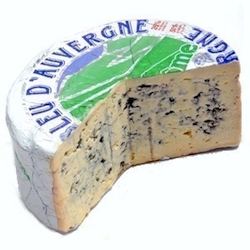 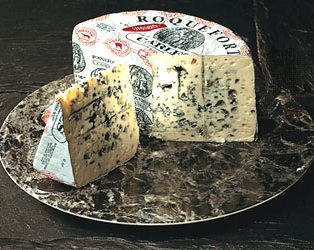 Les bleus can be for some the most affronting of cheeses. Be brave and try to ease into this smelly category with the least salty of all bleu cheeses, Saint Agur, which is more creamy than crumbly. The pungent Bleu d’Auvergne has a salty, spicy tang that’s ideal paired with apple slices or burgers. Roquefort, King of the Blues, is a Midi Pyrénées sheep’s cheese with blue mould veins. Roquefort crumbles, walnuts and figs commonly crown hearty salads. 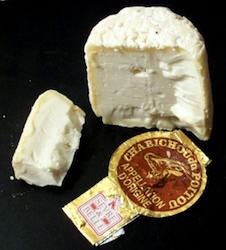 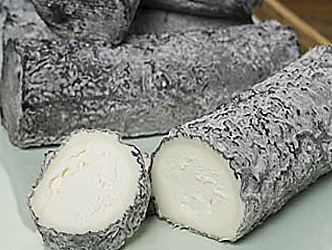 Bûche, Bûcheron, Chabichou du Poitou, and Sainte-Maure are chèvres, white cheeses made with goat milk available in three of the four categories of firmness. Chèvres are easy to spot because of their shapes: pyramids, thick discs (think hockey pucks) or cylinders. The Loire Valley and Poitou-Charentes regions are the largest producers and some cheese producers today use recipes that date back to the eighth century. 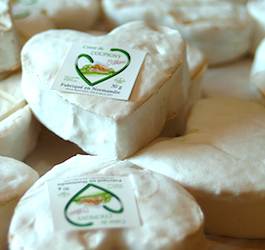 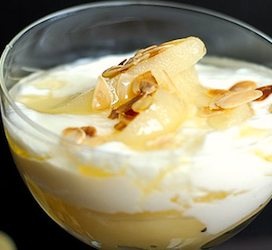 Fromage frais and fromage blanc are fresh or young cheeses. Fromage frais is a fresh creamy white cheese is made with whole or skim milk and cream, with the consistency of a cream cheese but with fewer calories and less cholesterol. Fromage blanc has the consistency of sour cream, but with a less tart flavor and, like its young cheese cousin, fewer calories and less cholesterol.

The cheese course is typically consumed after the main course and before or after a dessert. Your host may serve a small dessert followed by a cheese course with perhaps a dessert wine, like a sweet Sauternes. You may see a simple platter, board or slate with a few cheese knives beside three or four cheeses. Ask your host about the terroirs (region of origin) represented and your host will likely enjoy explaining because you may be sure they went to extra effort to create a complementary selection. At a restaurant, a rolling restaurant cheese cart may baffle you with ten or more choices. 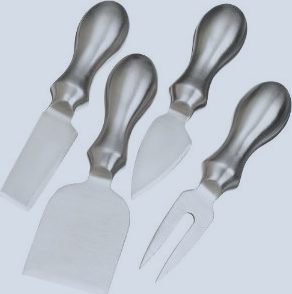 Cheese is alive and flavors of neighboring cheeses are easily absorbed, so take care to use the knife nearest the cheese you’ve chosen. There will be a separate knife for the soft, sticky cheeses and another for the harder cheeses. When in doubt, do as the locals do.

Cheese is served as near to its original form (wheel, pyramid, cylinder, slab, etc.) as possible to preserve its integrity. Should you be first to cut into a wheel of cheese, evenly cut a slender piece as you would slice a pie—children are taught to cut a slice about the thickness of a pencil, a good rule to follow. The most flavorful section is the center (called the “nose” by the French) and when you slice, cut evenly. This is also why you don’t cut straight across the tip of a triangular-shaped section of a Brie, for example, because when you cut off le nez (the tip) of the cheese, you deprive others of the coveted center. As you savor your portion, you’ll notice the flavor changes as you near the rind.

Cylindrical cheeses should be sliced into even rondelles (disks) and a pyramid-shaped cheese should be cut into one slice that is cut again in half. Chèvres and other cheeses grow around reeds or sticks, so don’t be surprised to find a column in the center of some cheeses.

To rind or not to rind, that is the question. Its answer is: eat what you’re comfortable eating. Some are quite tasty, some are tough and too hard to graciously chew, and the rinds that are washed are not edible. Again, do what the locals do and when in doubt, leave the rind.

In France, use a fork and knife from your own place setting (not a serving knife) to cut bite-size pieces. Again, manners have become relaxed and you may see some people eating the harder cheese with their fingers, which you may also do. But you can’t go wrong using a fork and your own knife. 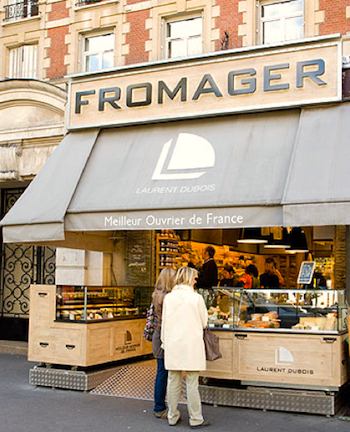 Tasting cheese in France can be compared to a wine tasting. Cheese is traditionally served with bread, not crackers, which is used to cleanse your palate between bites of different kinds of cheese. Some start by tasting the mild cheese and advance to the stronger-flavored cheeses. Some cheeses are served with honey, fresh fruit, raisins or currents, nuts or a delicious compote (try the fig). Honey may accompany fromage blanc, which is sometimes served in a little pot, or you can dribble a bit of honey on the cheese. Some put the compote on their cheese, others take a bite of cheese alone, then a bit of bread with a bit of compote spread on it.

So why is it customary to serve the cheese whole instead of pre-sliced, which would surely help us avoid etiquette faux pas? It’s a question of practicality and practice. It’s practical to keep the cheese intact to keep it moist and flavorful. But sharing a cheese plate is an enjoyable social custom. Take your time, savor every bite, and make note of which cheeses are your favorites…and which aren’t.

When you’re in France, try a culinary class or tour to learn more about French cheese. A cheese monger is a cheese expert with a passion for choosing, pairing and properly storing cheese. Attending a cheese class or tour is an enjoyable way to immerse in local culture and you’ll return with tips to try when you host your own cheese tasting at home.

At a minimum, stop by your neighborhood fromagerie (cheese shop) during a slow time and ask the counterperson to assemble a selection of cheeses you can eat on a picnic or back at your hotel or apartment. If you don’t speak French, don’t let that stop you—go prepared with a food translator. When visiting a fromagerie parisienne, just smile, point and ask, “S’il vous plaît, monsieur, quel type de fromage est-ce? Je suis curieux.”

Your last stop before leaving France? A quick run through the food departments at the Charles de Gaulle or Orly airport Duty Free Shops, where you’ll find a cheese selection. The clerks there are familiar with rules about carrying food into your home country and they’ll properly pack the cheese for transport.

Consult the French Cheese Marketing Council’s website for recipes and much more.

Janet deAcevedo Macdonald is a former resident of Paris.  Simply writing about French cheeses reminds her of what she misses about living full-time in Paris.

A Goodbye Letter to Paris (for now)