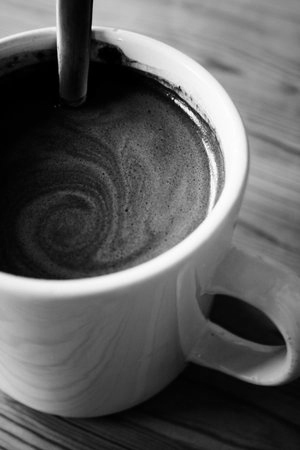 It must be getting warmer, and I haven’t noticed. The red pear I bought the other day and set down in the sun on the counter was hard as an oyster when I put it there. Now it’s too mushy to eat, and the baguette I bought when the bakery was closing last night may have been the first solo flight of an apprentice or just a dry run. Looks like breakfast out and might as well make it a treat. I head for the shower.

Breakfast at home has its advantages. I can make it for a couple of euros while it costs four times as much in a café. Better than frugality, there is the comfort of my own pace and juices: I can sit around in an old shirt and my undies, unhurried, unscrubbed, unbrushed, unshaven, and unobserved. My coffee is better than you can find at most cafés these days—a pity and a shame—even if the croissant may still be warm with luck and a bakery right next door. But as an old lady once said to me, what’s seldom is wonderful, and I’m looking forward to eating as I bound up the street towards a café.

For the few minutes it takes me to get there, I’m walking in the wake of the fat guy on the scooter. I’ve seen him before. He’s tall and heavy. The little razor-blade scooters are still hanging on in Paris among small children who tend push along after mothers like ducklings. The fad among young men, well dressed and disdainful looking, pushing themselves along seems to have died a deserved death. Any adult on them is absurd enough, but the fat guy on the scooter is like being dealt a joker off the bottom of the deck. He’s wearing orange gym shorts, not quite long enough to qualify for fashionable in the NBA, but too long for Parisian street wear, a heavy green anorak zipped up to the bottom of his last chin, and his few strands of gray hair are evidently responding to different wind currents or drummers.

I’ve seen him around the quartier several times. He often stops to talk with someone, but never close enough to me to make out what’s on his mind. He never smiles, but doesn’t seem to threaten or bother anyone, and off he goes, with a courier bag slung across his body, at a stately pace, no faster than I am walking, clearing the way for me, it seems. He arrives at the café just a couple of metres ahead of me, pivots to the right and stops as if he’s been my outrider, my pied piper, then pushes off, continuing his scooter dance as I find a sunny seat in the café.

A man coming out from inside glances at me, holds out his copy of Le Monde and asks me if I’d like it—not that there’s anything in it one does not know already, he assures me. I take it and thank him. This is my favorite way to read newspapers in Paris, without paying, since they are expensive by American standards, about twice as much, and often even less interesting, but the paper goes with breakfast as surely and comfortably as Ralph with Norton, take it as you will. With a bolt of inspiration, I ask the waiter for chocolat instead of coffee, figuring things are going well and let’s keep it that way.

It keeps. The chocolate is good, the bread better than the corpse on my counter, no pears to be had, but the waiter offers me fresh strawberries. The paper is the paper, and all is well as I stretch my feet out and wriggle my toes. This is actually therapy, but has become a habit. Trouble with my feet has taught me a few tricks. When my big toes hurt—and two neurologists, an orthopedist, and a podiatrist have not been able to figure it out—stretching and wriggling my big toes makes them feel better. The other problem, the pain under the balls of my feet, is something else. Various insoles, custom made devices, and trying on more than thirty pairs of shoes have done little except leave me with two large objects on my feet that look as if they escaped from underneath the Michelin tire man, except mine are black. But as I walked to the café, I noticed nothing painful and my feet are feeling good. Time for a walk, my first real one in a couple of weeks, maybe more, and I’m raring to go. And I know where.

If I walk due west, allowing that walking due anywhere in Paris is impossible, there’s a museum I want to visit, probably seven or eight kilometres from where I am. A nice long walk right through the midsection of the city, even if I think it won’t hurt to take the Métro a couple of stops to get going, and so I do. Back on the street, I’m in crowds, more and more weighted to tourists as I get into the arrondissements with the low numbers, and figure What the hell and head toward the Rue de Rivoli. You want tourists? How many do you want?

Wandering on Rivoli reminds me of wending uphill at Mont St. Michel the first time, passing all the stalls that once sold dried Virgin’s milk, chunks of the True Cross, and arrowheads plucked out of Saint Sebastian to pilgrims. When I got there, they were selling postcards, plastic models of the church, and Kodak film—so long ago, et où sont les Kodaks d’antan?—to tourists. Both sold crap, the pilgrims buying stuff made in the back rooms, the tourists buying stuff made in Asia. Rivoli is the same today and offers the same experience without having to travel to the ends of the earth or at least to Basse Normandie. You wonder—I do—what the architects under the two Napoleons had in mind for their arcades on Rivoli. Objects where the letter A in Paris is always the Eiffel Tower?

But the sun is shining, people are buying and smiling, and where’s the harm? None, but I worry about my feet which are not hurting, but sore and weary and ready for a rest: they’re slack and flaccid from disuse. I find a café and order chocolate again. The morning café brought me jugs of hot milk and melted chocolate and let me mix my own. Here it comes all done up, with a little pompom of cream on top, powdered cocoa, and a sweet wafer. It is also the most expensive cup of chocolate I have ever had, but it’s good, my feet agree, and—after a deep breath—we push off. In half an hour, we’ve made it, gently, to the pretty Sixteenth Arrondissement, passing along a park with playground equipment and mothers with young children all over the grass. Wednesday afternoon: no school, and the day is lovely as long as you stay in the sun. The jungle gyms and slides are busy, but the three sad-looking ponies hitched to their carts and graduated in size by about a hand are immobile. Is it amazing that there’s no manure anywhere, though I can smell it? Perhaps no more amazing than the stupefying private houses backing up to the park, no more incredible than anything in the life of the pretty Sixteenth.

And no more astounding, once I reach the museum, than Monet’s dark and smoky painting of Charing Cross bridge, a picture that shows me more and more as I walk backwards away from it, focusing with my feet. I sit—a bench is just at my focal length—and look until I can’t look any longer, not at it and certainly not at any other picture. I stand up, walk up the stairs, out into the sun, and start the trip back toward the east. The route is indirect. There are too many small streets, the ones whose names often don’t appear on maps for lack of space, that I don‘t want to miss. Coming out of this snail-shell of streets, I find a main avenue, walk a bit, and stop for another chocolat. Maybe it’s a good luck charm—or maybe it’s something else—but I can walk, and why push it? Sit a bit more, drink your chocolate, smile back at the sun. Here the chocolate is different still—ready-made, but brewed with much darker chocolate and brought in a little pot with enough for modest seconds. I could wonder about the sociology of serving hot chocolate in Parisian cafés, but I don’t have to.

It’s not very late, yet I haven’t eaten since breakfast, even if the cocoa has given me enough sugar to power a Bateau-mouche, and making my way home for a little puttering, a clean-up, and then dinner makes sense. I go a little more than half the remaining way underground. When I come out of the Métro and reach the sidewalk, I realize that I actually ran up the steps, something I haven’t been able to do since before I can remember and longer ago than I want to think about. I’ve never liked the expression “a spring in my step,” but there it is, my feet free at last. I am springing along avec un sourire fendu aux deux oreilles and it must show. People smile at me, I smile back from ear to ear, and nearly burst out laughing when I hear an accordion.

There’s a shabby man playing the old cabaret tunes outside a café. I stop and listen, then notice a woman sitting with a friend at a table who looks at me with an amused grin. I hadn’t realized that I was dancing in place. She cocks her head, smiles, and I stretch out my arms, a shall-we-dance gesture. As I live and breathe, she gets up and we dance on the sidewalk. Many of the old post-war songs were waltzes, and this is fun, holding a pretty woman in my arms and waltzing around to the joy and laughter of anyone who cares to look. The musician, I think, stretches out the tune, but ends it just before it would have been too much—too much for my lungs, my feet, too much of a good thing. The woman smiles, we say au’voir, and in fifteen minutes or so, after an optimistic stop at the bakery, I turn into my street with a baguette under my arm and chewing le bout de pain. What more could I want from the day?

No more than a few metres ahead of me is the fat guy on the scooter, the same as before, pumping away with his pale white left leg, his hair on end, his bag thumping his back, making way for me, leading me home in triumph.