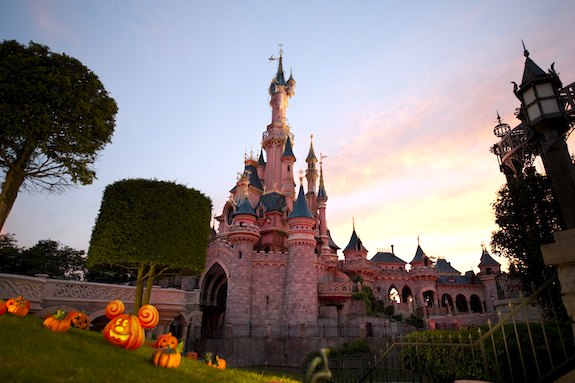 Disneyland Paris at Halloween: From Trick-or-Treat to Terrorific

The air is crisp and clear, the sky an almost luminous shade of blue . . . it’s fall again in Paris. And what can you do when visiting Paris on a glorious sunny day in October? Go to Europe’s #1 tourist destination, Disneyland Paris, for the month-long “Disney’s Halloween Festival!” Over 230 million visitors have been to Disneyland Paris since it opened in 1991—over 15 million last year alone! Since April Disneyland Paris has been celebrating with anniversary events leading up to its 20-year anniversary, which occurs in April 2012. 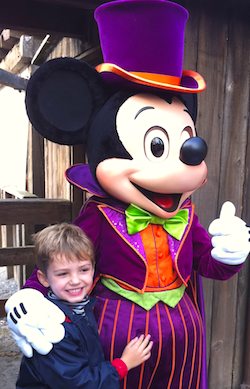 Go to Disneyland Paris on an autumn weekday and you can sometimes walk straight on to rides. Weekends are a little busier but it’s nothing compared to the swarms that descend in summer months. Walking through the “Magic Kingdom” in autumn with lighter crowds is an amazing experience.

Every October, Disneyland Paris celebrates Halloween all month long, marvelous mischief you shouldn’t miss, particularly if kids are in your group. The Disneyland Park is decorated with Mickey-shaped pumpkins and ghosts that make October a wicked good time for kids young and old. This year, festivities include three different Halloween theme parties, two Halloween shows and plenty of opportunities to meet Disney villains.

Disney Villains meet and greet you daily in October

Villains rule at Disneyland Paris in October. Cruella De Vil, Captain Hook, Jafar, and the wicked witch from Snow White wander the park, stopping to sign autographs and pose for photos along the way. In between villain sightings, you can watch one of two new Halloween-themed shows on the daily roster, “Disney’s Maleficious Halloween Party” and “Mickey’s Halloween Treat in the Street.” 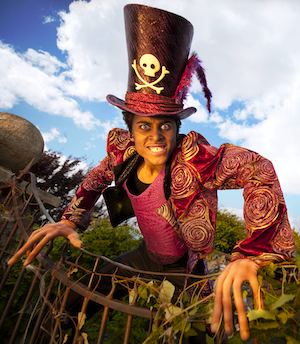 “Disney’s Maleficious Halloween Party” is a new show at the Central Plaza Stage featuring the traditional “favorite” villain, Maleficent, and the new evil upstart, Dr. Facilier, from the Walt Disney Pictures film The Princess and the Frog.

Mickey’s Halloween Treat in the Street!

“Mickey’s Halloween Treat in the Street” is another new show, and it’s an interactive show held on the Castle Stage. Mickey Mouse, Minnie Mouse, Donald Duck and more of Mickey’s closest friends invite all to join the celebration at their Halloween party. You can dance and sing with Mickey and his friends, and at the show end the audience is showered with candy!

The night events are not included with your daily park admission ticket and a separate party ticket must be purchased for each event, which allows you to enter the park after closing on the day of the night party.

Unlike the daytime events with light crowds, Disney’s night events are popular events for good reason, so expect lines at the rides that are open. Regardless, you should attend for the ambience and the fun. Rides you can do anytime, but Disney’s Halloween Festival comes but once a year. 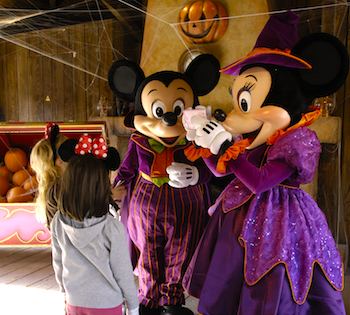 This Halloween event is aimed at the younger crowd, or at least the younger crowd that can stay awake until 10 or 11 pm. Mickey and Friends host the party in their Halloween costumes, plus the Disney Villains will also be there to greet costumed guests. It’s an interactive experience with a trick-or-treat bonanza for both kids and adults, with face painting, villains, parades and shows and a big Halloween finale. To add even more fun and mystery, this year Disney is apparently changing the entertainment schedule and being a bit “hush hush” about it, but rumors have it that there will be characters not normally seen at Disneyland Paris. All this cloak-and-dagger just adds to the atmosphere.

Because it is so kid-friendly, this is the event that sells out the quickest, so buy your tickets as soon as possible if you have any inclination to attend. You should also know that, while the park is open, not every ride is open, but given the full roster of entertainment, don’t let this discourage you from attending. 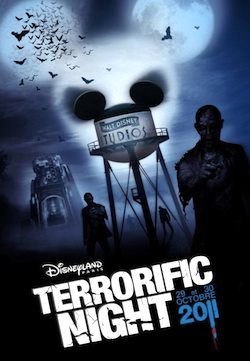 Cost: €32 per person (not recommended for anyone under the age of 12)

This event is the polar opposite of “Mickey’s Not So Scary Halloween” and is designed to terrify teens, young adults and those who like gruesome creatures and monsters. When Disney says it is not for children under the age of 12, they are serious. To give you an example, last year the “Studio Tram Tour” was turned into the “Terrorific Tram Tour” and it included demons and zombies that crawled into your car and tried to snatch you. A “Who’s Who” of Disney Pictures villains made appearances, including Hannibal Lector, Freddie Kruger, Leatherface and even Tim Curry’s “Prince of Darkness” from “Legend.” Clearly this was not “family” fare, especially not for young children, but if you enjoy a good scare, this is the event for you. If you’re considering attending, you might also want to make an honest assessment of your own “fight or flight” response. Getting scared and having a good scream is one thing, elbowing a Disney cast member is another. They won’t thank you for that.

Disney’s Halloween Party, the most unforgettable night in October

Cost: €35 per person (free for children under 3 years of age with an adult)

This is Disney’s “Halloween Night” party, a one-of-a-kind party on the “deadliest” night of the year. In terms of the scare factor, it lies somewhere between the “Mickey’s Not So Scary Halloween” and the “Terrorific Night.” The event itself actually leans more toward the “Not So Scary” side, with street entertainment, stage shows, Disney’s Fantillusion Parade lead by the Disney Villains and a Halloween Sound and Light Show at Sleeping Beauty Castle. At times costumed adults attending the party jack up the scare factor, so this might not be the best choice for very young children, but it’s great for a “date night” and it gives adults a chance to trick-or-treat. Last year, the “Nightmare Before Christmas” was very well represented, but Disney makes changes every year. You can be sure there will be some exciting spectacles and a great finale.

In addition to all of the events described above, some of Disney’s regular rides have a special glamour at Halloween. The Haunted Mansion is always dressed up for October, but rumor has it the Pirates of the Caribbean and Snow White attractions will get a bit more orange emphasis as well.

So, in short, fewer people, fun parties, happy kids…more than enough reasons to have a Happy Mickey Halloween at the “Halloweenmosphère unique” in Paris.

Lexy Delorme is an expat mom of two now living in Paris. Click on her name to learn more about her and to read other stories by her published by BonjourParis.

Shop our Amazon.com Boutique for the very latest books, travelers essentials & everything else available at Amazon.com. New items added daily. BonjourParis has been published since 1995 thanks to your support.

Frommer’s Paris and Disneyland Resort Paris With Your Family: From Captivating Culture to the Magic of Disneyland