Rare works by Impressionist painter Gustave Caillebotte and brother photographer Martial Caillebotte are paired in the current Caillebotte Brothers exhibition at the Jacquemart-André Museum until July 11, 2011.

The collection includes privately owned and never before publicly displayed paintings and photography that reveal the Caillebotte brothers’ artistic and intimate universe as it was in the early twentieth century. Viewers are guided on a journey into a world of the bourgeoisie with the Caillebotte family and country homes as models. Through their images the Caillebotte brothers share moments from their personal lives spent inside their homes and outside in gardens and boating on rivers.

The two brothers also reveal Paris in a transitional period. Gustave’s view was from balconies overlooking trees, roundabouts and strollers along the boulevards. Brother Martial showed horses, omnibuses, accidents and ladders, a reference to the building construction, modernity and renovations going on in Paris. Photography captures Sacré-Coeur in its infancy, the horse in an accident and light bulbs in need of changing. 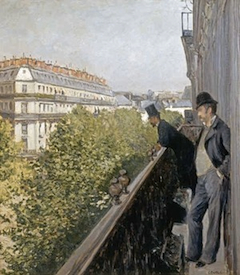 Businessman and art collector Edouard André and his painter wife, Nélie Jacquemart, moved into their Boulevard Haussmann home in 1875, now an official France-owned museum known as Musée Jacquemart-André. Gustave Caillebotte’s painting “Les Raboteurs de parquet” (The Floor Scrapers) was refused at the Paris Salon that same year. My introduction to Gustave Caillebotte was in Chicago in the early 1990s and his 1877 painting, “La Place de l’Europe, temps de pluie” (Paris Street, Rainy Day). My next major introduction to Caillebotte was actually seeing the floor scrapers at the Grand Palais in 1994. That painting left an impression and left me bewildered about French art history. At least three times, the French art authorities rejected his work.

The audio guide solved a bit of mystery at the current exhibit. Why does the man wear a top hat while rowing the boat in “Canotier au chapeau haut de forme” instead of a common canotier? Why are the sailboats so close to each other in “Régates à Argenteuil?” A friend who accompanied me on this visit saw her own family in the country photos, the boys with long hair and clad in dresses; the flowers and stones of the garden; the photos of great aunts and grandmothers dressed in black. Martial’s photos captured a popular and accepted lifestyle outside of Paris duplicated by many others in other country homes. 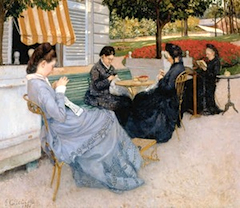 The Caillebotte family country home was in Yerres with a river of the same name flowing nearby. The painting “Portraits à la campagne” presents a warm, sunny summer afternoon. Women of the nineteenth-century bourgeoisie are seen doing what women typically did in those times: read, sew and embroider. While a cousin, a friend of the family and an aunt were busy with their hands, the mother of Gustave Caillebotte, Madame Martial Caillebotte (Céleste Daufresne, 57 years of age) was shown deep in reading.

Go to the iTunes store and type in Caillebotte and choose either the HD or the regular version. The guide, available in French and English, presents a video of the exhibition, complete introduction, and an audio commentary of a selection of the works. Pretend you are there while being hundreds of miles away.

Audio guide available in French and English for an additional 3.50 euro paid when you buy your entry ticket and collected inside the museum.

The pocketsize guidebook in French (2 euro) is a general written and visual presentation and commentary on the exhibition.

The museum has a lovely restaurant/café and fixed menu (16.50 euro) or à la carte.

The menu the day of the exhibition was a delicious salmon and spinach quiche, side salad, and choice of numerous desserts from the dessert carte.

To read more by this author: Colleen’s Paris Blog . 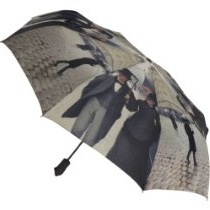 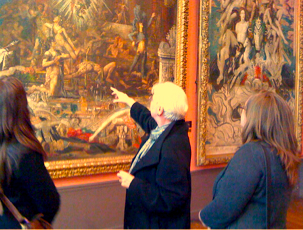 Context Travel offers several critically-acclaimed small group and private walking seminars in Paris on art, history, architecture and gastronomy. Walks are capped at 6 people, providing an intimate and in-depth learning experience. Context is offering a special to Bonjour Paris readers on a selection of our walks.