Back in the 8th century AD there was a Benedictine monk and traveling confessor named Émilion. He wandered the lands, far and wide, eventually settling in an underground hermitage carved into the rock beneath an old Roman village located roughly 35 km (22 mi) northeast of what is today the city of Bordeaux.  The village had been known since the 2nd century for its vineyards, planted by the Romans, that produced a bountiful harvest and much lauded wine. Other Benedictines followed the reclusive Émilion, adopting him as their leader.  Their monastery grew and became the center of religious life in the area. A village sprouted up around them and prospered. Indeed, the impact of Émilion’s leadership was so great and so well respected, the villagers took his name for their town. They named it Saint Émilion.

This is where our adventure began, in the famed walled city of Saint Émilion, in the middle of Bordeaux wine-country. Charming and atmospheric, with layers of living history going back through the ages, it is a “must see” for visitors to the region. 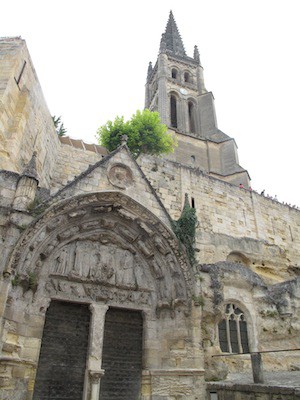 In the 9th century, Saint Émilion’s Benedictine monks began the work of carving a church from the limestone hill that rose up over the ancient vineyards. They would carry on with this task for over 300 years, leaving us with the greatest monolithic – or underground – church known in Europe today.

In medieval times, the town’s rich commerce and now wealthy inhabitants were encircled by moats, gates, fortified walls and a city keep to protect them from invading marauders. It was a good thing, too, for the next three centuries saw the area beset by wars between the French and English, the town changing ownership with each new victory.

By the end of the 16th century the town had completely lost its luster, its population had largely diminished and it had ceased to prosper. Its buildings and fortifications began to fall to ruins, making it an easy target during the French Revolution when defacing religious monuments became all the rage. The few remaining residents left were driven out at that time. Saint Émilion would go unoccupied for the next 100 years.

The mid 1800s rebirth of the wine trade brought prosperity back to the region.  Saint Émilion rose again, restored to accommodate the traders, tourists and traffic they created.

Upon arrival in Saint Émilion, make your first stop be to the town’s impressive Tourist Bureau where you can sign up for a guided tour of the Église Monolithe – the only way to gain access to it. 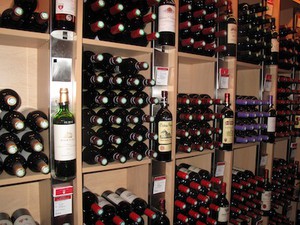 Among the many things distinguishing Bordeaux vineyards from their California cousins is that you can’t always be sure of tasting the French nectar at its source, like you can in Napa and Sonoma. Indeed, some of the more famous vineyards, such as Ausone and Petrus in neighboring Pomerol keep their whereabouts unknown to the public. They prefer to leave the privilege of customer dégustation to the town wine merchants, such as Vignobles & Chateaux, 4 rue du Clocher.

That’s where we partook of a wine-tasting class, and it was well worth it too. We learned about the unique history and characteristics of Bordeaux wines; we were introduced, through blind smell test, to eight potential Bordeaux aromas; and we were treated, by blind taste test, to three choice local red wines. (The classes are offered in both French and English.)

Along with Pomerol, Médoc and Graves, Saint Émilion boasts some of the principal reds of the Bordeaux region. These are made, as they have been for centuries, of Merlot and Cabernet Franc grapes, with a bit of Carbernet Sauvignon sometimes thrown in. 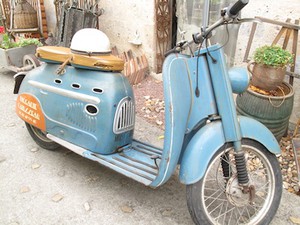 For a view of the vineyards offering a different perspective, you might find a bike trip to be just the ticket. You can find full- or half-day bike rentals at the Saint Émilion Tourist Bureau. They even have trail maps to offer, taking you off the main auto routes. We traveled south into the heart of Les Deux Mers, the area between the Garonne and Dordogne rivers. Though the terrain is hilly, the riding is not arduous and after a steep climb you are awarded with a breathtaking view every time. Pack a picnic, or not – there’s never a country café or bistro too far away. Take your time. Meander. If you get lost, look for the spire of the Église Monolithe to set you back in the right direction again.

That’s right, situated an easy hour’s drive from Saint Émilion are several art exhibitions 140-centuries-old. Our choice: Rouffignac, the last of the famous Dordogne caves to be opened to the public and hence the best protected.

We arrived early so as to beat the crowds and were escorted through a wide cave opening and into an underground cavern until we reached a simple train. We piled in with the two-dozen or so other visitors and down we went into the eight kilometers of passageways hewn into the rock by pre-historic subterranean river systems. (Bring a sweatshirt.)

Two kilometers beneath the surface of the earth we were treated to the most extraordinary site: 250 engravings and paintings of animals dating back to the upper Paleolithic era – mammoth, woolly rhinoceros, horse, bison and an animal looking much like an antelope called a capricorn. The sensation of looking up at these creations, rendered with subtle details and in perfect perspective yet with the aid of no more than a burning candle made of animal fat for light, is beyond words. Even the youngest children amongst us were speechless.

Sated with wine, exercise and time travel, we topped off our visit to the Bordeaux region by braving high-season traffic with a walk along the popular beach at the basin of Arcachon. Though only 150 years old, this little beach town’s history is no less interesting. It dates to the mid 19th century when medical professionals began to recommend the sea air to people suffering from ill health. Early entrepreneurs jumped on the discovery, creating seaside accommodations for the wealthy, and inspiring a new lifestyle of second home ownership by a seaside formerly known to only fisherman and pine trees.