The Whimsical World of Macarons 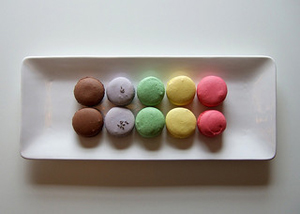 Macarons. One of the great things about these delectable pastries is that once you’ve mastered the art of making them, you’re only limited by your imagination in terms of the flavours that you can go on to create.

For those of you unfamiliar with the macaron, what it is a meringue-based pastry that’s primarily made with ground almonds, egg whites, and sugar. Its colourful incarnations grace many shops in Paris and are also popular around the world.

Typically, the macaron is filled with some sort of a delicious ganache, buttercream or jam, which is sandwiches between two “cookies.”

Although, this is a delicacy that’s widely associated with France, it seems to have some Italian roots.  Some say that the chefs of Catherine de Medici brought the recipe to France when she married Henri II in 1533.

Regardless of its origins, this sweet dessert is here to stay.

Want to make your own? Below you’ll find a recipe from master patissier, Pierre Herme (from his Macaron book). Once you get the perfect batch, feel free to experiment with flavours and invent your own. 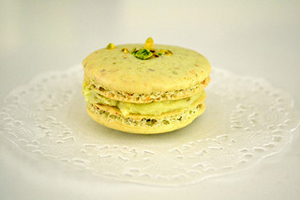 Bring the water and sugar to boil at 118C. When the syrup reaches 115C, simultaneously start whisking the second portion of liquefied egg whites to soft peaks on a medium speed.

When the sugar reaches 118C, pour it over the egg whites. Whisk and allow the meringue to cool down to 50C, then fold it into the almond-sugar mixture. Spoon the batter into a piping bag with a plain nozzle.

Pipe rounds of batter about 3.5cm in diameter, spacing them 2cm apart on baking trays lined with baking parchment.

Rap the tray on the work surface covered with a kitchen cloth. Leave to stand for at least 30 minutes, until a skin forms on the shells.

Preheat the fan oven to 180C, then put the trays in the oven. Bake for 12 minutes, quickly opening and shutting the oven door twice during cooking time. Out of the oven, slide the shells on to the work surface.

Blend for 10 minutes with a hand blender. Pour the ganache into a gratin dish. Press Gladwrap over the surface of the ganache and set aside in the fridge for the ganache to thicken. Spoon the ganache into a piping bag with a plain nozzle. Pipe a generous mound of ganache on to half of the shells then top with the remaining shells.

Store the macarons in the fridge for 24 hours, bringing them back out two hours before serving.