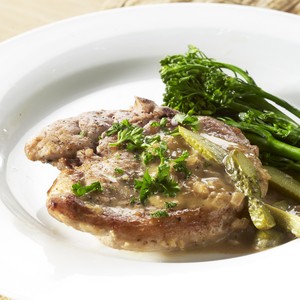 Most French cooks have no more time to spend in the kitchen than we do; yet as we know, the French love and expect to eat well, night after night.

How do they do it? Well, of course, having great traiteurs (delis) and cheese, charcuterie, and pastry shops on every corner helps get a meal to the table quickly. But French cooks are also pros at turning a quick-to-cook piece of meat—such as pork chops, steaks, and chicken breasts—into a lovely main dish.

The secret is in the sauté-deglaze-serve way of cooking.

There are thousands of variations on the theme, but in a nutshell, this is all you do: You sauté the nights choice of meat in a skillet; then, you deglaze the pan by pouring wine and/or broth into the drippings.

As the liquid boils and reduces, you stir up the tasty browned bits left in the skillet. Maybe add a touch of cream or butter to enrich the sauce. Then, add a few defining touches to make a unique dish, night after night: apples, grapes, or olives here, celery root or morels there, and fresh herbs almost everywhere.

And there you have it: Dinner, with a vivid and intense French pan sauce made as simply as our American grandmothers made gravy.

This recipe is a great introduction to the method. Serve with one of these side dishes, and enjoy.

From The Bonne Femme Cookbook: Simple, Splendid Food That French Women Cook Every Day, which offers an entire chapter—over 40 recipes—that call on this simple sauté-deglaze-serve way of cooking.

1. Season both sides of the pork chops with salt and pepper. In a large skillet, heat the oil over medium-high heat until it shimmers. Add the pork chops, reduce the heat to medium, and cook, turning once, until slightly pink inside (145°F), 6 to 8 minutes. Transfer the pork chops to a platter and cover with foil to keep warm.

2. Drain off all but a sheen of fat from the skillet. Add the shallot to the pan and sauté briefly, until translucent. Add the broth and the wine to the skillet, stirring with a whisk to loosen any browned bits from the bottom of the pan. Bring to a boil and boil until the liquid is reduced to 1/2 cup—this should take 4 to 5 minutes, depending on the heat and your pan size. Whisk in the mustard and butter. Bring to a boil and whisk in the cream (if you like) and the parsley. Stir in the cornichons until heated through.

3. Divide the chops among four dinner plates, spoon the sauce over the chops, and serve.