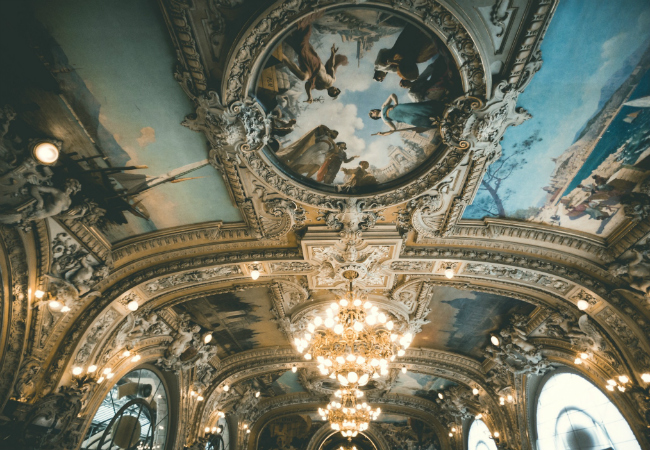 Corey Frye, also known as “A French Frye in Paris,” spends much of his days pounding the cobblestones in Paris as he leads tours around the city. Along the way, he spots wonderful details, panoramas, cafés, and historic sites. These “Paris Moments” he will be sharing with Bonjour Paris readers in a new column featuring the Photo of the Month. Enjoy!

They don’t call it the “beautiful era” for nothing, and I’m convinced the word magnifique was created exactly for moments like this! The Belle Époque, or Paris circa 1900, was a time when optimism, creativity, and champagne were always on tap. Music of Debussy and Ravel echoed through concert halls as Rodin chipped away at his Thinker and Picasso studio-hunted in Montmartre. From this breeding ground sprang architectural eye candy like the Petit Palais, Pont Alexandre III, and this restaurant ceiling.

Le Train Bleu was an exclusive eatery built at the start of the century with all the trappings of a royal chateau and the VIP service to match. It was designed to take passengers’ breath away at Gare de Lyon as they arrived for the World’s Fair, and more than a century later it still dazzles. The painted ceilings, representing the cities of France, have hovered over the famous heads of Chanel, Dali, Bardot, and countless others.

Where does the name come from? A luxury locamotive called the Calais-Méditerranée Express once whisked wealthy travelers to the French Riviera, and was famous for its sumptuous dark blue sleeping cars. It became known as Le Train Bleu, a name associated with extravagance and one that eventually attached itself to this restaurant. Still today you can enjoy a meal under this ornamental canopy, or if your budget’s a bit tight just ask politely and you’ll be allowed to photograph your own little slice of the Belle Époque!

More in Paris Photo of the Month