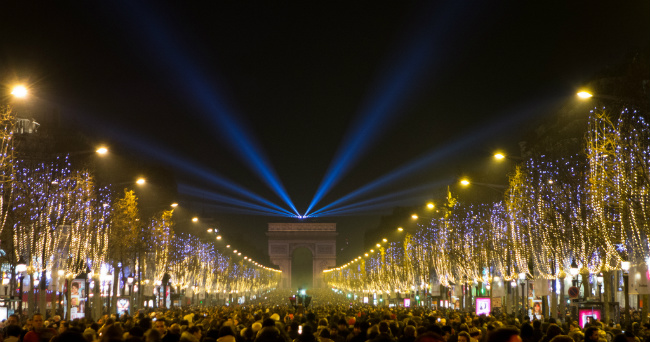 Tis the season in Paris. The shops on the rue Saint-Honoré are showing off marvelous decorations, the department stores are unveiling their famous windows, and the illuminations are now up on the Champs-Élysées (read our article for the full report). And for all you flâneurs out there who appreciate wandering the city aimlessly and admiring sites such as these, you’ll be pleased that the city of Paris has announced 435 new public toilets. To be installed by 2024, the new model is said to be “more comfortable and more ecological,” and the waiting time between uses (when the facility is cleaned and disinfected for the next user) will be significantly cut. By the way, apparently Paris reigns supreme as the city with the most toilets “in the public space.” (Who knew?) And some more good news for pedestrians: Paris is considering banning public scooter rentals because of concerns about public safety on the sidewalks.

Paris has overtaken London as Europe’s biggest stock exchange. According to figures released by Bloomberg, the French stock market now has a combined value of $2.823 trillion. As reported by TheJournal.ie, “Brexit has ‘permanently damaged’ the UK economy, former Bank of England policymaker Michael Saunders warned as London was deposed as Europe’s biggest stock market.” The internet publication further reports: “as well as shifting consumer patterns, the market capitalisation calculations also reflect currency movements, with the pound dropping 13% in value against the US dollar this year while the euro has fallen by a milder 9.2% against the American currency.” As explained by Yahoo News: “Domestic-focused UK shares have slumped this year, while French luxury goods-makers like LVMH and Gucci owner Kering have recently been boosted by optimism over a potential easing of China’s zero Covid policy.”

Speaking of luxury goods, LVMH has announced plans to open the very first Louis Vuitton branded hotel inside the brand’s Paris headquarters. The building in the 1st arrondissement will also boast the Louis Vuitton’s largest store. In fact, this area that used to be a no man’s land has been transformed in recent years by LVMH. As reported by Hypebeast, “the luxury conglomerate has cut the ribbon on the all-new La Samaritaine department store, opened reservations at the Cheval Blanc hotel, and set up a new Cova pastry shop. While the Cheval Blanc is only a short walk away from the Vuitton headquarters, [Chairman and CEO] Burke says LV’s hotel will not pose any threat. ‘It would be its own identity, and own segment and own service — a completely different experience,’ he said.”

The World Cup opened in Qatar on Sunday, with all eyes* on France — the defending champions. Les Bleus played their first match on Tuesday, defeating Australia 4-1 with goals scored by Adrien Rabiot, Olivier Giroud, and Kylian Mbappé. France’s star striker, who also happens to be the current Ballon d’Or champion, has withdrawn from the tournament because of a quadriceps injury suffered during a training session. Karim Benzema will need weeks to recover. As reported by The Guardian, “He was France’s top scorer at the 2014 World Cup but did not play in the victorious 2018 World Cup campaign because he was still exiled from the team for his involvement in a sex tape extortion scandal that shocked French sport. He returned for last year’s European Championship, and finished as France’s top scorer.”

* Not all eyes, because there’s a portion of the population boycotting the World Cup because of the environmental implication and human rights costs.

French environmental activists splattered orange paint on a Charles Ray sculpture in Paris — what RFI describes is “the latest in a string of attacks on artwork aimed at spurring greater government efforts to fight climate change.” Situated in front of the Bourse de Commerce- Pinault Collection of contemporary art, the life-size “Horse and Rider” was also dressed in a T-shirt emblazoned with the words ‘We have 858 days left,’ “in a reference to studies that say carbon emissions must peak by 2025 if the planet is to have a viable future.”

In travel news, JetBlue has announced transatlantic expansion plans with new flights from New York JFK to Paris-CDG in summer 2023. This will be the second European destination served by the airline, following the launch of service to London in August 2021. Conde Nast Traveler says, “The new flights are sure to be a boon to deal-seeking fliers on the East Coast, where traditionally few affordable Paris route options exist… The market for flights between the U.S. and France is the second biggest in the world, according to a release from the airline, and France is on track to see 75 million tourists by the end of 2022.” JetBlue will also add nonstop service between Boston Logan International Airport (BOS) and Paris-CDG sometime in the future. Meanwhile, Forbes asks: “will [the announcement] help the company’s stock price, hovering near year lows?”