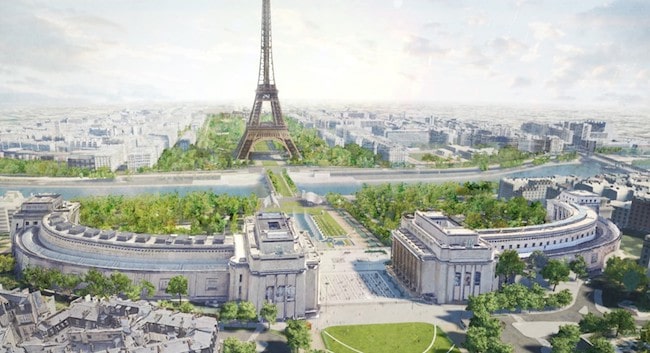 In another bold step towards the pedestrianization of central Paris, Mayor Anne Hidalgo announced plans last week to transform the Trocadéro area into a “green corridor” linked to the Eiffel Tower. Slated to be unveiled before Paris hosts the Olympic Games in 2024, this new urban project will create the largest garden in Paris.

London-based landscape architects Gustafson, Porter and Bowman were awarded the contract (there were 43 applicants). As reported by France 24, architect Kathryn Gustafson was “part of the team that created the Princess Diana memorial fountain in London.” Work on the €72 million project will start at the end of 2020 or early 2021.

To quote France 24: “Trocadéro offers one of the best views in Paris of the iconic Iron lady, but the Pont d’Iéna (Jena Bridge) linking the two monuments is heavily trafficked, often making the short walk in between them a highly-polluted experience.” Soon the bridge will be pedestrianized and flanked by trees. Indeed Mayor Hidalgo has declared war on Paris pollution; the popular, pedestrian-friendly parks on the former highways along the Seine’s quays are examples of this.

The new project will cut down on car traffic around the Eiffel Tower, while creating a mile-long corridor for pedestrians to savor one of the most popular landmarks in the world. The Champs de Mars gardens surrounding the Eiffel Tower will also be improved, with numerous fountains added.

Previous Article Paris Vignettes, Volume 2, by Photographer William O’Such
Next Article Champs-Elysées Film Fest Carves A Niche of its Own