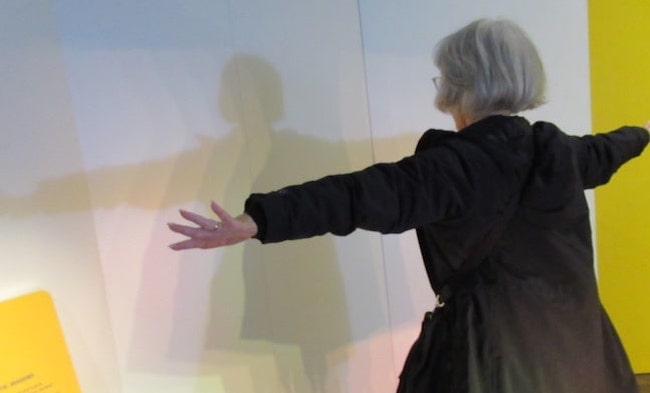 On February 18, 2020, less than a month before France entered its formal Lockdown on March 17th, Cité des Sciences opened the ambitious exhibition, “Contraires”, a perfect sequel to “Les Cabanes”, a 2018-2019 blockbuster that encouraged creativity within and collaboration between children from ages two to seven. It had been hugely popular. The children (and the adults who accompanied them) had been enchanted by opportunities to play, “live” in, and learn by exploring a range of whimsical environments. Their delight suggested that they would be a perfect audience for “Contraires”, an investigation into “Opposites” through visits to imaginary incarnations of familiar landscapes – a school, a house, a street (and its neighborhood), a park or a store. 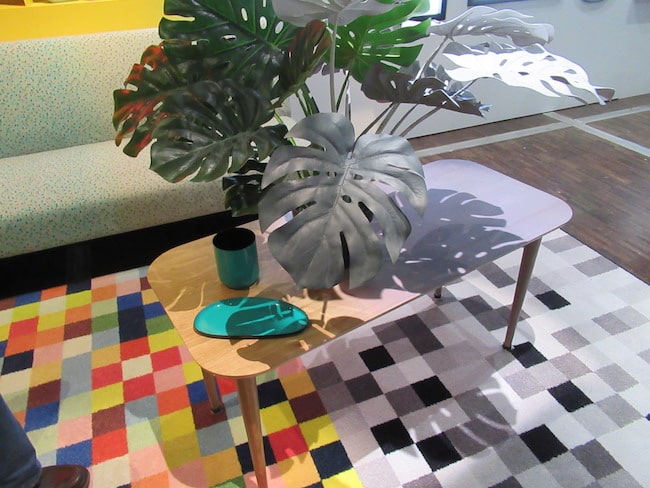 In the living room section of House, contrast in shades of white and colors. Photo: David Griff

Because I staunchly believe that small children learn best through play (and was scheduled to lead a discussion – postponed because of the confinement – on that topic at the American Library in Paris two days later), I wanted to see how the curators had translated the notion of multiple points of view into environments that would welcome the children from the tiniest two-year-olds likely to understand best through their own physical senses to school-age children who could grasp abstractions of a principle and appreciate differences if viewed through opposite lenses.

In this ingenious exhibit, children of all ages use sight, sound, touch, and movement to experience contrasts in size, shape, weight, texture, location, light, color, direction. Smaller children were quick to manipulate, puzzle, explore how something “worked”. More subtle contrasts are available to older children through games, art opportunities, more precise comparisons, including language. Perhaps the favorite activities we noticed among many older children were climbing upside-down trees in the upside-down park and jumping on the bed in the darkened bedroom of the house, laughing as they watched one another’s iridescent aprons seem to float free in nothingness.

Inside an exhibition filled with opportunities to explore actively, my personal favorite was a passive video located in a “cinema” tucked behind the Store. Through clever animation and spot-on dialogue, the characters in the “play”, Can One Put People In Boxes?, make a persuasive argument for universal human similarities along with our unique variations. In the brief film, a plea for equality amid diversity comes to life, reminding us that differences in people’s external characteristics have only limited meaning.

My husband and I visited “Contraires” on March 12th, only days before the museum was shuttered for more than three months. Traffic was decidedly lighter than usual, but several small groups of children, accompanied by their teachers and a few parents, helped us appreciate the brilliance of this creative effort. The museum reopened on June 27th . The exhibit requires a timed-entry reservation. Do organize your visit now for an utterly charming hour or so of discovery. Written, video and auditory commentary is available in French, English and Spanish.

Previous Article Paul Valéry: Poetry in a Time of Dislocation
Next Article Paris in the 1920s: The Tale of the Notorious Kiki de Montparnasse