Christian Lacroix at the Musée Cognacq-Jay 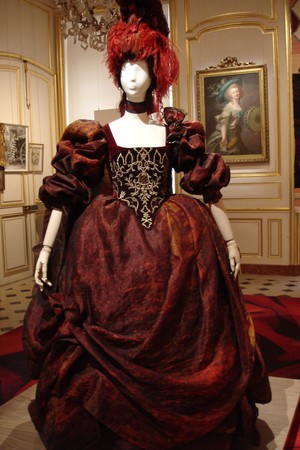 Lumières: Carte Blanche à Christian Lacroix, the current exhibition at the Musée Cognacq-Jay, in the Paris 3rd through April 19, introduces a bit of edginess to the staid museum by displaying contemporary creations among the museum’s permanent 18th century collection. The museum gave carte blanche to designer Christian Lacroix to mount an exhibition that would both provide a “guiding narrative” to the museum’s collection, displayed in the recently refurbished rooms, and show how 18th century design influences contemporary society and design. Lacroix has the bona fides for the assignment. While at the Sorbonne in the early 1970s, he wrote a dissertation on dress in French 18th century painting, and he enrolled in a program in museum studies at the École du Louvre with the intention of becoming a museum curator.

The impetus for this exhibition seems to have been how to make the Musée Cognacq-Jay more relevant – and perhaps more interesting – in a world of increasing museum competition. After all, in its own neighborhood alone, it has to compete with among others, the recently reopened Musée Picasso and the Centre Georges Pompidou (Beaubourg), not to mention the new and quite spectacular Fondation Louis Vuitton, farther afield.

Ten themes were identified among the museum collection around which the exhibition is structured. These include shows, balls, and sociability; Paris, capital of the Enlightenment; Europe’s artistic economy; the classical model; childhood and education; and portraits and the emergence of the individual.

Lacroix chose forty contemporary artists whose works, which include sculpture, paintings, objets d’art, photographs, textiles, costumes, and installations, are displayed among the museum’s holdings. And it can sometimes be jarring to see a jagged, garish installation among the museum’s mostly pastel rooms meant to evoke 18th century sensibilities. Of particular interest to those who like fashion will be the costumes in the exhibition. These include a man’s suit by Belgian fashion designer Walter Van Beirendonck with a modified 18th-century-style waistcoat in hot pink, and several costumes designed by Christian Lacroix for opera productions. They are constructed of miles of fabric, which are as textured and rich as the fabrics of some of the 18th century dresses included in the exhibition.

Those interested in photography will find two portraits by Pierre Gonnord, one of a young girl named Charlotte, taken in 2010, and the other of a young girl named Iris, taken in 2011, in the childhood and education room, of particular interest. Indeed, these photographic portraits are intriguing, in part because, although they are contemporary, there is a certain timeless quality to them, and they could just as easily have been rendered in oil in the 18th century.

Ernest Cognacq, founder of La Samarataine, the now defunct department store, and his wife, Marie-Louise Jay, collected 18th century art, which they displayed at temporary exhibitions at the store. They wanted visitors to have a sense of “the artistic décor of French life.” The Cognacq-Jays bequeathed their art collection to the City of Paris, which decided to house the collection in the then-newly renovated Hôtel Denon, a 16th century townhouse in the Marais. The museum opened at its current location in 1990. Lumières is its inaugural exhibition following the recent refurbishment. Like all museums, the Musée Cognacq-Jay must find a way to maintain its relevance in the ever more competitive museum world. The jury is out as to whether mounting this exhibition will help it do so. Yes, the big name – Christian Lacroix – is there as a draw. But the exhibition at times seems to have to make a bit of a stretch to make its point. Perhaps the museum should stay true to the intent of the museum founders – that is, to be an “evocation of the taste in the 1900s for the Age of Enlightenment” – and to find a very specific niche and mount stand-alone exhibitions in that area. Because, unfortunately, the current exhibition seems more a jumble than an integrally designed exhibition. It might also consider opening a destination restaurant or salon de thé, like the one at the Musée Jacquemart-André. Good food is always a draw, and if that’s what it takes to make it in the museum world today, go for it. We live in a foodie world.

All that is something museum officials will have to work out. Lumières: Carte Blanche à Christian Lacroix is, nonetheless, worth a visit. But viewers would be better off appreciating the contemporary objects on their own merits, and only tangentially as a reflection of how they were influenced by 18th century design.