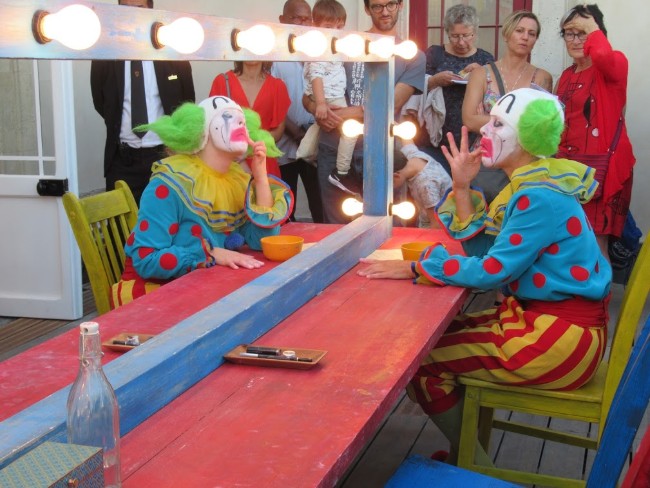 For 30 months Paris’s beloved theater, Théâtre du Châtelet, home to so many performances and entertainments that were modern in their times, was closed for renovation. Under the new leadership of Co-Directors Thomas Lauriot dit Prévost and Ruth Mackenzie, the mission of the institution was examined, updated and reaffirmed; goals were clarified. Châtelet would continue to be the leader in performing arts for the people of Paris that it had been since its origins as a circus (then named Philip Astley) in 1780. In its sixth and current location on Place du Châtelet since 1862, it has been known as a center for ever-expanding forms of entertainment. A messenger of the avant garde since the turn into the 20th Century, the theater has welcomed people from all backgrounds, artistic interests and musical preferences. Although the institution has traditionally moved beyond its own walls to bring people to experiences that can inspire, delight, and educate them, an update of the original 1862 building was in order. Architects Philippe Pumain and Christian Laporte oversaw the massive restoration and renovation. Respect for historical integrity along with commitments to security, accessibility, inclusivity and beauty remained uppermost in their minds. 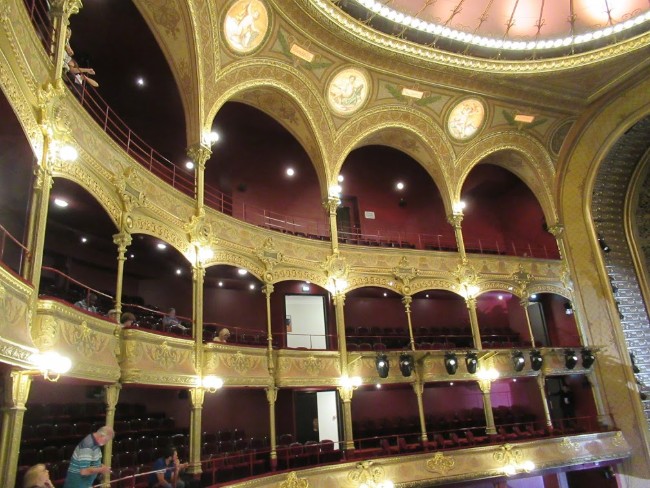 Chatelet first opened in 1962 with a vision of uniting audiences from the Left Bank and the Right Bank, knowing that their sensibilities could enrich each other. Barron von Haussman, under whose auspices the theater was built, saw the banks of the Seine as a perfect location. And so it remains, just meters from the marker on the parvis of Notre Dame that indicates the center of Paris. The metro/RER stop Châtelet is among the most traversed in Paris; numerous bus lines stop within blocks of the theater; RER lines B and C deposit visitors a brief walk away. Today one can easily reach the theater on foot or scooter or bicycle. 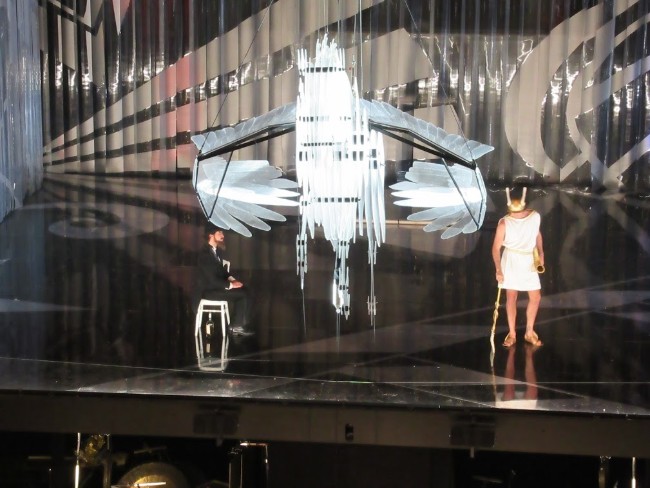 The theater has also chosen to reach out to people in Metropolitan Paris and invites them to participate in, learn from, and enjoy programs. The theater aims to be inclusive, welcoming to all; to be accessible, with bathrooms, wheelchair seating, and elevators for those with disabilities; to be affordable, with the addition of a section of seats for performances available at very reasonable prices; to be safe, with security for body and mind a major goal. The unobtrusive railings are most welcome! 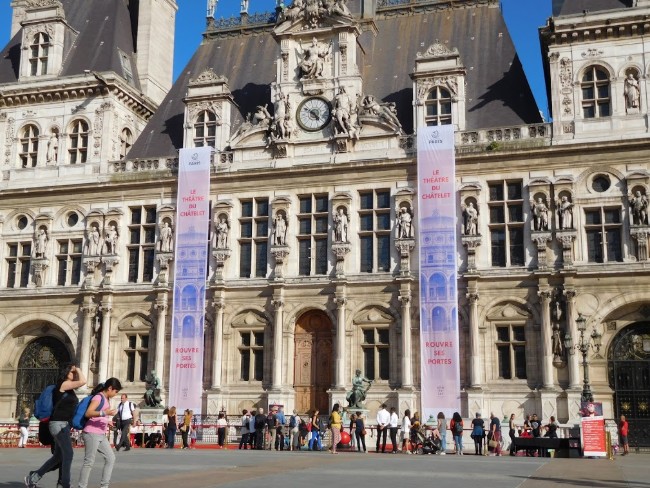 Prior to the performance, much thought, planning and effort had brought the public into the picture. (See the BonjourParis.com article here.) On the weekend of the opening, children gathered to make Picasso-inspired costumes, to learn to balance on a beam or a ball, to jump through hoops, to juggle. Soon the giant marionettes arrived on the parvis of Hotel de Ville, along with a large corps of recruited amateur (and professional) drummers, all led by a Jean Cocteau-inspired-bicycling-machine. The contraption included an oversized typewriter with bottle-cap keys; it turned out pages and pages of printed passages from Cocteau’s writings. On one side smoke puffed out, representing the power for the machine; on the other a giant scissors snipped across the air. The smaller marionettes, still somewhat larger than humans, joined the procession. One made entirely of recycled plastics and cans sported a long train to her gown the followed her as she cavorted. She caught the imagination of countless children who jostled to talk to her, touch her transformed materials. People took photographs and videos, spoke respectfully to the handlers, waited turns to shake hands with a Marionette, as they all danced toward the center of the square in front of Hotel de Ville. Like the original Parade, the effect was “surrealistic”, the term coined by Apollinaire to describe the experience in 1917. 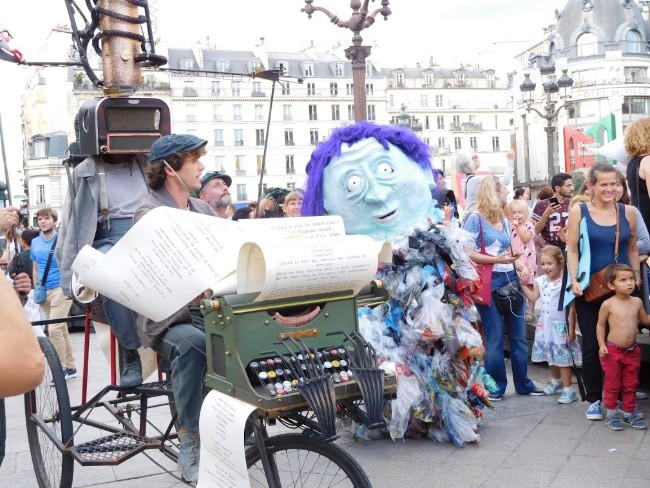 With drummers drumming and fans and followers clapping and laughing, the machine led the strange papier maché group to the center of the parvis. There the Marionettes from Mozambique performed for the crowd, dancing with one another and then reaching out their long arms to shake hands with bystanders. The chief bicyclist on the machine pedaled to make long iron fingers type words; pages proved his productivity. The parade continued, along rue Victoria, across bd Sebastopol, to the very front of the refurbished Théâtre du Chatelet. Drummers and marionettes offered a final performance, and the doors to the theater were opened, welcoming inside those who had come to celebrate the historic moments. 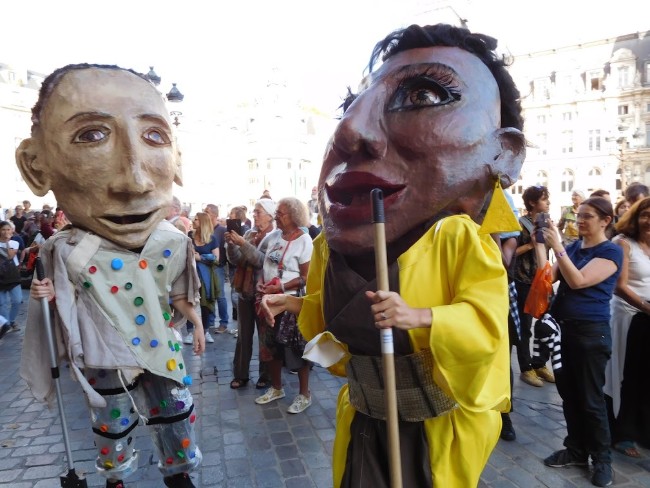 People of all ages and backgrounds, babies on shoulders, toddlers in strollers, small children chronicled the event with cameras. A few people in official “Securité” t-shirts assured that the crowd would make room for the dancing Marionettes to lead the crowd across the route; the Croix Rouge, the French branch of the International Red Cross, stood by in case a person needed help. Beyond these official sources of protection, the crowd – la grand publique – made its way sporting smiles and comments of delight with the whimsy being offered by the theater, announcing its renovation for the 21st century, focusing on accessibility, inclusivity, security and technological capability. Introduction to the Théâtre

The two-story foyer of the theater featured three performers on elevated platforms. They were dressed as a devil, an angel/fairy, and a clown. They invited people to come inside and investigate the updated but familiar spaces. Throughout the building entertainers offered surprises and delight. A magician hypnotized a duck on one landing; an actress playing Madame LouLou pranced like a primadonna on another. The Grand Foyer, the main reception hall, had a stack of grand pianos, Erik Satie style, piled on top of each other. A pianist, complete with top hat, sat at the ground-floor keyboard, while he and three mermaids splashed each other with the water in which the entire display was seated. At intervals, the pianist played Satie’s music, with the mermaids singing arias, while water dripped slowly from the top of the whole display onto the stacked pianos, to the performers below them, into the landing basin. 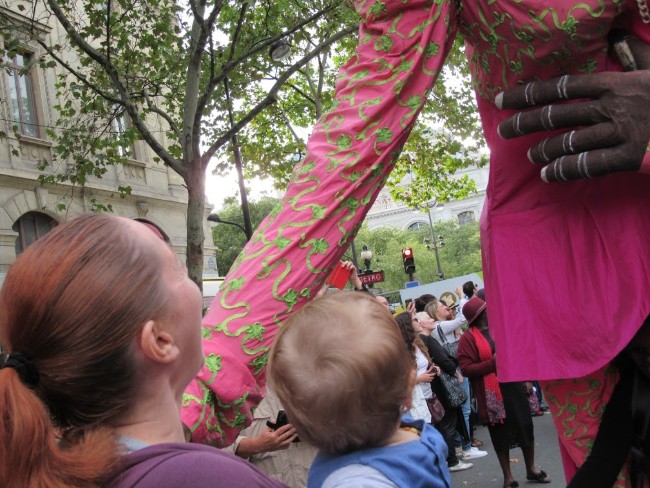 Other entertainments were equally surreal – two clowns mirrored each other as they made themselves up; a representation of a column from Le Chat Noir promised cabaret; sad clowns invited visitors into a space filled with brightly colored lightbulbs; cooking occupied an entire salle.

The paint was fresh, carpeting spotless, bathrooms redone, hallways pristine, all spaces tended to, updated, polished, along with the infrastructure brought into the twenty-first century. The stained glass windows that face the Place du Châtelet sparkled. Elevators silently transported those needing them to the many levels of the theater. Presentation of the Spectacle

Inside the theater, the burgundy velour seats showed no signs of wear. The bulbs in the massive chandelier shined brilliantly. The motifs surrounding it announced the historic commitments of the venue: Pantomime, Vaudeville, Comedy, Tragedy, Drama, Music, Féeries (that unique French performance art dedicated to whimsy and mystery and especially associated with Châtelet), Opera, and Dance. Accommodations were available for those with sight, sound or mobility impairments. From the orchestra through the Corbeille, three levels of balconies, and a top tier of seating, views were unobstructed. Extending beyond the physical walls, the Saturday night performance was streamed to permit access across the world. 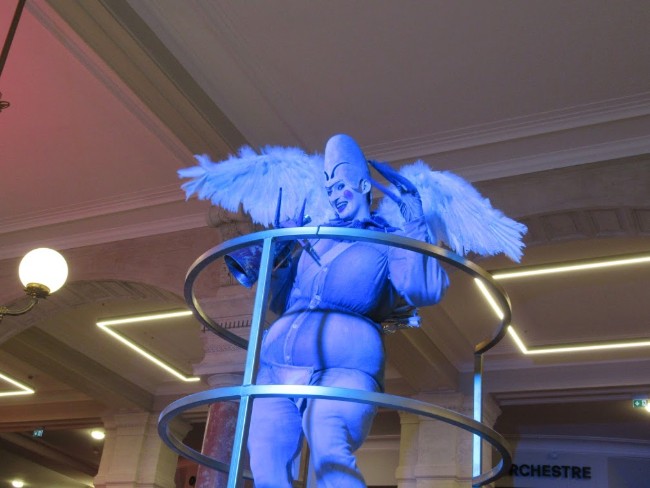 The theater reopened with five performances on the weekend of September 13 to 15. As described before, in a tribute to its own groundbreaking history, the Jean Cocteau-Pablo Picasso –Erik Satie–Diaghilev masterpiece, Parade, was reinterpreted for modern times. In the original twenty-minute ballet, circus performers, carnival acts, then a “little American girl” reach out to invite the public into the theater to see an original performance. In today’s version, directed by Martin Duncan with sets and costumes by Francis O’Connor, lighting by Sinéad McKenna, and music directed by Matthias Pintscher, three separate acts evoke past, present and future. In an introductory scene, a man dressed as Cocteau or Satie might have been in 1917, encounters a sculpture that looks like a giant shimmering bird at center stage. Eventually a baseball-cap- clad “modern” man joins him on stage and, in a past-meets-future entente, the two watch as the bird rises to reveal the entire renovated stage, in all its height and splendor. They depart and the giant Marionettes from Mozambique, complete with their drummers, command the stage. Rhythms invite dances by the enormous constructions (managed by expert handlers) who represent the endangered beloved polar bear, a man and two women. They are accompanied by smaller but still larger than life marionettes. They cavort; the audience is enchanted. But those who had arrived early knew what was coming. 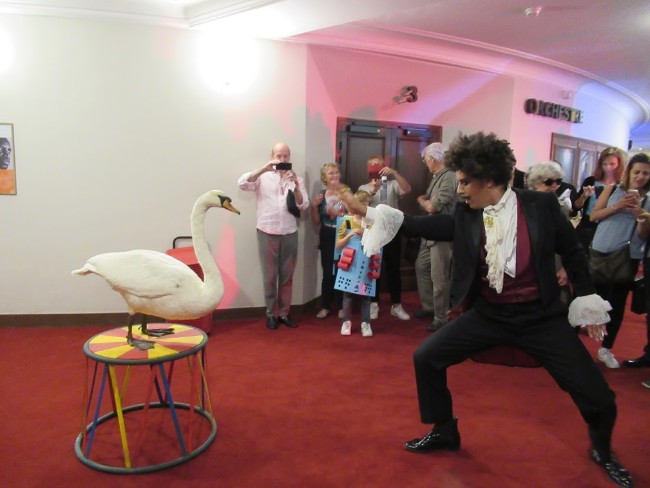 The second act featured Stéphane Ricordel’s Bôite Noir. Five acrobats balanced on bouncing beams, a high wire, while tumbling, all brilliantly choreographed to the stunning music of Ukranian musicians DakhaBrakha. Their riveting other-worldly interpretations of traditional Ukranian folk songs with the addition of modern rhythms and unique instruments recalled Cocteau’s additions of sirens and typing to Satie’s music while adding a spiritual dimension that left me breathless. The Boite Noir performers took their unassisted bodies through feats that seemed impossible while the quartet created sounds that transported us to a mystical otherworldly experience. 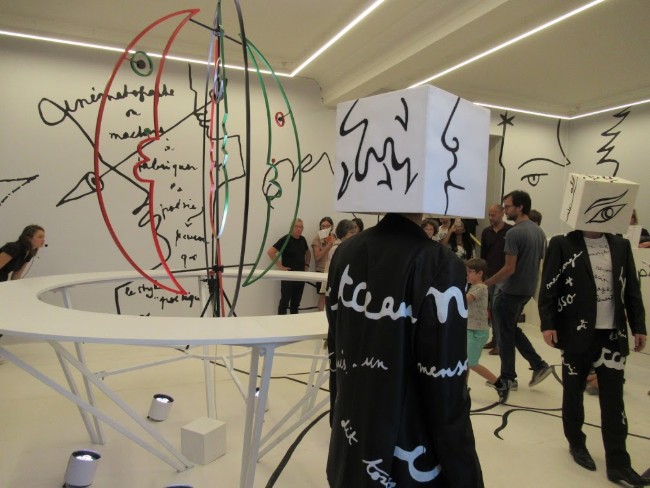 The first 2019 Parade on Friday, September 13th, took place when local news media declared Paris suffering from the “worst traffic jam in twelve years”. Indeed, our bus ride to the site took more than triple its normal time and the return, owing to gridlock at Place de l’Alma, more than quintuple what we expected. But we pronounced the delays and discomfort well worth any aggravation. We had been able to share in a series of historic events. Our relationship with Châtelet will forever be respectful; our expectations will forever be high. We immediately secured seats for “An American in Paris”, returning for a second run this coming Christmas season, when we will again be in Paris. Given the success of the 2014 production choreographed by Christopher Wheeldon, Théâtre du Châtelet promises to again outdo itself. From lunchtime concerts to serious social commentary, from Pina Bausch’s futuristic minimalist dance interpretations to the classic Cinderella, the theater is ready to create, inspire and educate all generations in ways accessible to people throughout the world. Parade celebrated this commitment with impressive joy and innovation. 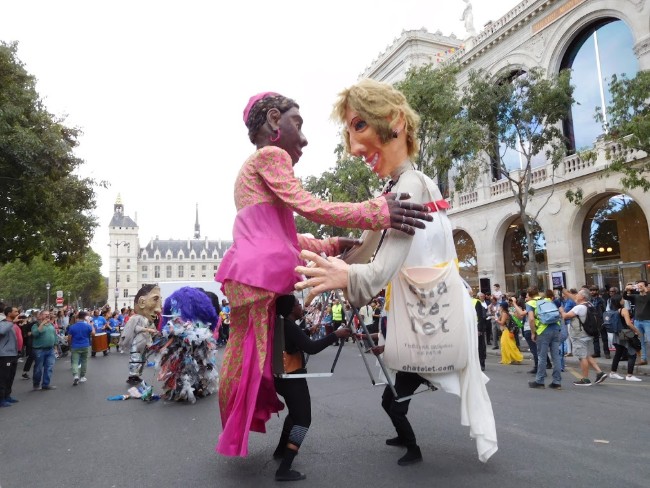 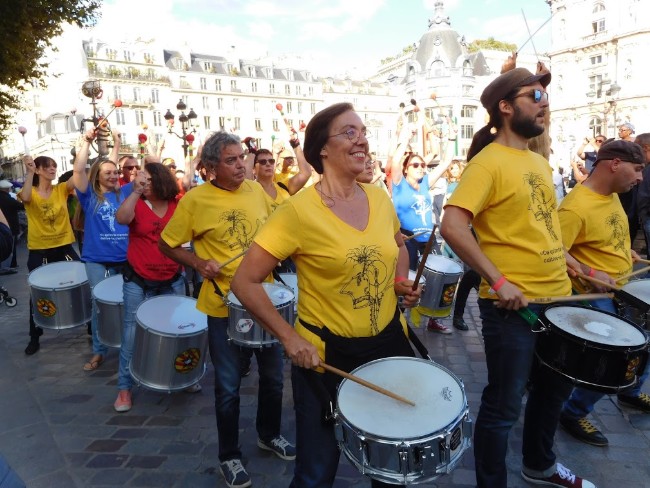 Previous Article Inside the Hotel Molitor Paris as it Celebrates its 90th year
Next Article Book Review: Haunting Paris, A Novel by Mamta Chaudhry